And the Paint Goes On...

I think the neighbors and those who drive by on a regular basis are confused. They're probably thinking we are I am having a hard time making up my mind again. But not to worry; I have a plan! And I'm sticking to this one. 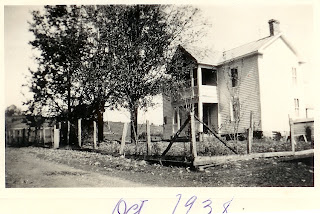 Until last fall, that is. Along came the in-law (that would be me), who painted it a dusky yellow. I'm sure there were those who wondered, "What in the world is she thinking??" I can tell you what I was thinking: FREE! When people asked me what color the house was, I told them free. It's a wonderful color!! 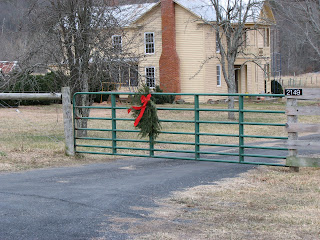 There were several reasons to choose this wonderful color, the most important one being its cost: $0.00. My brother-in-law John has his own construction business, specializing in tin roofs, log cabins, and guess what: exterior painting!! Several years ago, he took on a job and purchased gallons of quality paint in the client's chosen color. That client must have been a little like me, because she changed her mind on colors. I'm glad she did because she let John keep the wrong color and he offered it to us for his cost, which was nothing. Our farmhouse hadn't been painted in decades, which meant it required a lot of scraping, Since the first coat of paint would need to soak in well to provide a good base, it would not be a true color. Therefore, it didn't really matter what color it was. It could have been hot pink for all I cared. It would eventually be covered up anyway. So John went to work, adding linseed oil to the paint and slathering it on. Then we let it sit and soak in all winter. 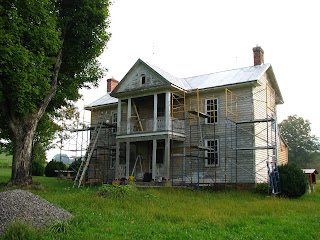 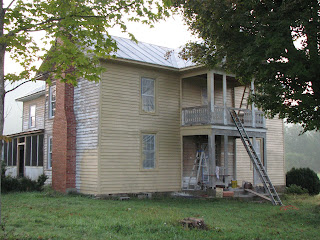 Folks were scratching their heads, wondering if we were going to leave the house this color. Some liked it; some did not. I have to admit, the color grew on me. With some dark green or dark brown shutters and trim, and a dark roof, it would look pretty spiffy. But in the end, I decided to put it back to its original white. Consequently, folks were scratching their heads again this last month as the paint went on: 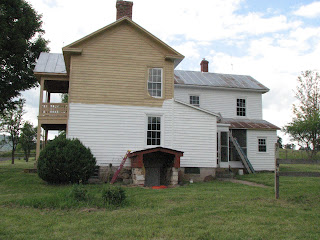 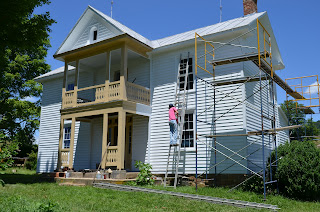 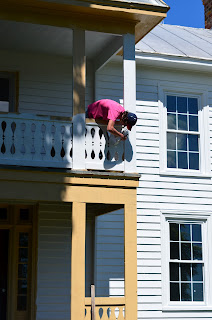 Now it's all white again and gleaming in the summer sun. Besides the free base coat, there was another advantage to painting it yellow. Around the front door there are sidelights, small panes of original glass. When John put the yellow paint on the house he used a sprayer, and much to my dismay, he didn't shield the glass in these sidelights. They were covered in yellow paint and I wondered if it would all scrape off. Thankfully it did, and in the process it revealed something special. Robin's great-grandfather, William H. Vance, who was born in 1842, fought in the Civil War, and died in 1935, had etched his name in the glass. 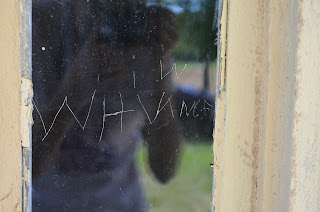 What a find that was! I think we'll be leaving the yellow paint and the treasure it revealed on this pane of glass for a long time. It's a sweet whisper from the past to inspire us in our quest to make this house a home once again.

Email ThisBlogThis!Share to TwitterShare to FacebookShare to Pinterest
Labels: The Guest House

Two old soldiers met today, to sit a spell and visit. They shook hands and greeted one another warmly, glad to have one more opportunity to be together. 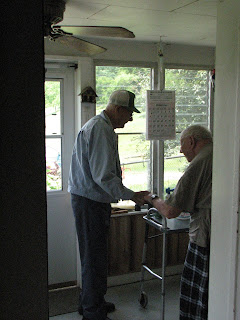 Both were young farm boys when they went half way around the world to fight a war. One was headed for the Army's infantry and the other for the medical corps.


Bill was a first sergeant in the 34th Red Bull division, and fought his way from Salerno to Cassino, in Italy, going without a bed, a hot bath, or a hot meal for three months in the fall of 1943. 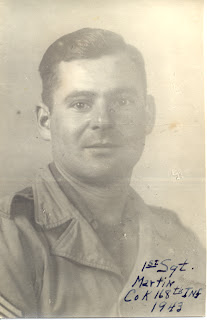 Bruce was a medic with the 42nd Rainbow division, bandaging up and transporting his wounded buddies across Austria and Germany, and making life or death judgement calls as to whom he could save and whom he could not. 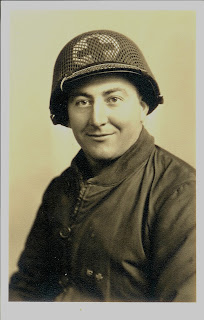 But today, they were just two old widowers in their nineties, sitting on the porch and talking. It puzzled me as to how, when they are both deaf as a post, they could hear each other easily. 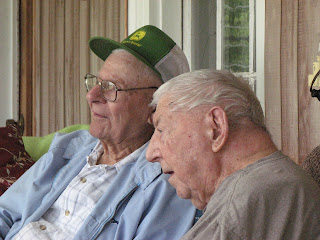 They talked about a lot of things: the weather, gardens, family, the War, the President, and the how young people have a lot to learn. They talked about being old, and the challenges they face in simple things, like walking and negotiating stairs, picking up a glass or cup without a spill, and eating spaghetti gracefully with a spoon. 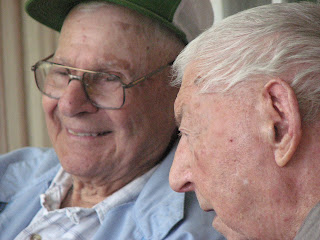 And they talked about how, like Dorothy in The Wizard of Oz, they believe there's no place like home, and nothing better than sleeping in your own bed. When they came home from the War, both men married and raised families, Bill with a career in the Postal Service and Bruce farming land that has been in his family for generations. They didn't know each other until one's youngest son and the other's youngest daughter married each other, but they soon found out that comrades in war make easy friends. 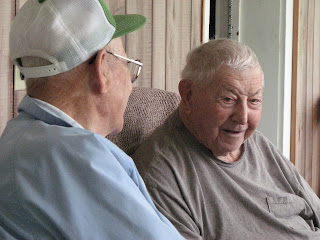 When their visit came to an end and my father and my father-in-law parted company, it was with another firm handshake and the usual pleasantries of taking leave. But the unspoken words hung thick in the air:
"Life is hard for us old soldiers. Hold on. I hope I see you again." 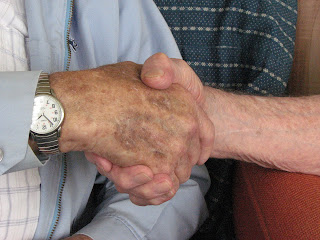