What a Difference the Weather Makes

After last week's big snow, I made it up to the Guest House with my camera before anything changed Mother Nature's handiwork. Give her a foot or more of snow and some hefty winds and just look at what she can do! 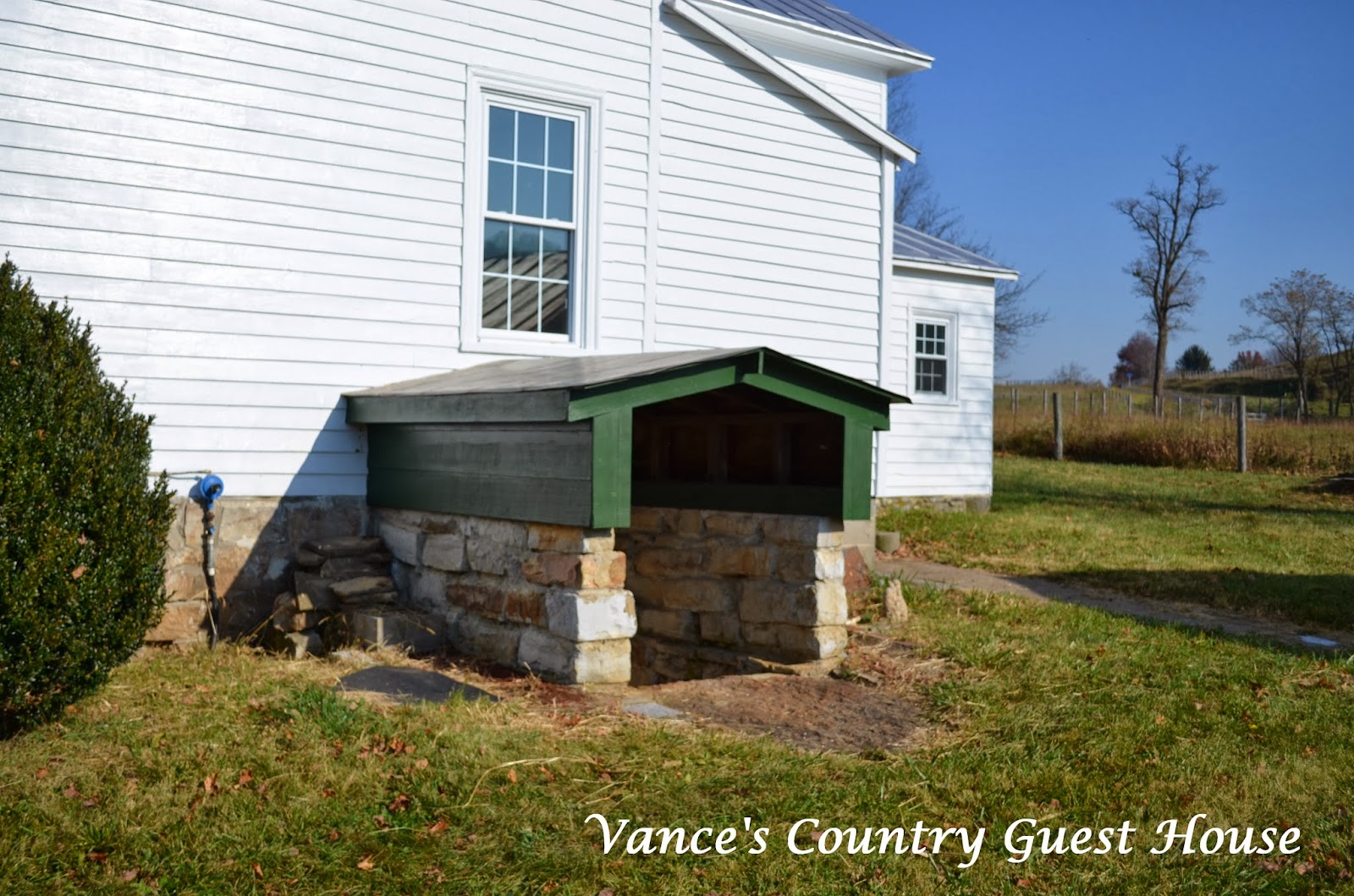 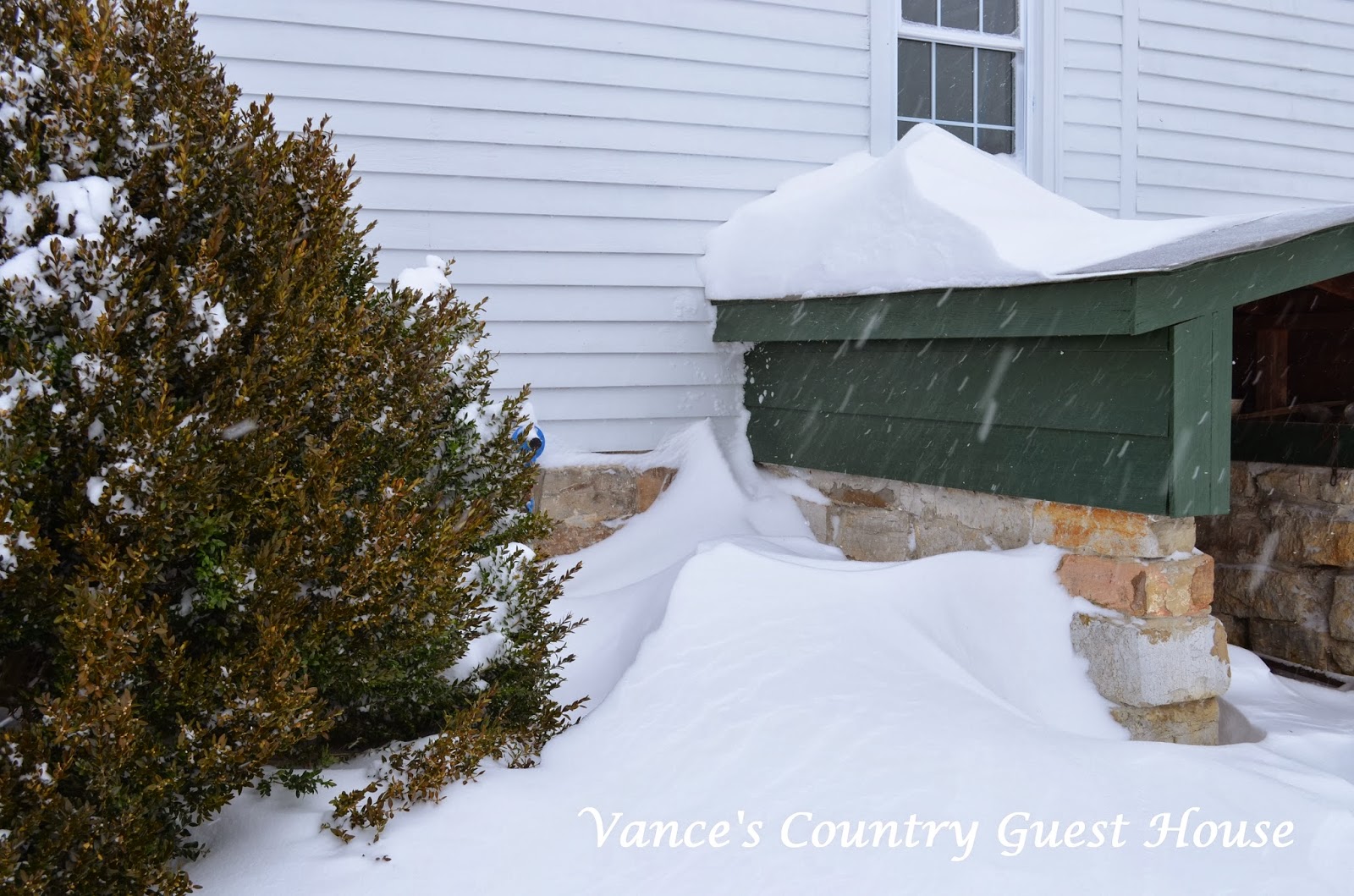 And my little flower bed that started out like this last June: 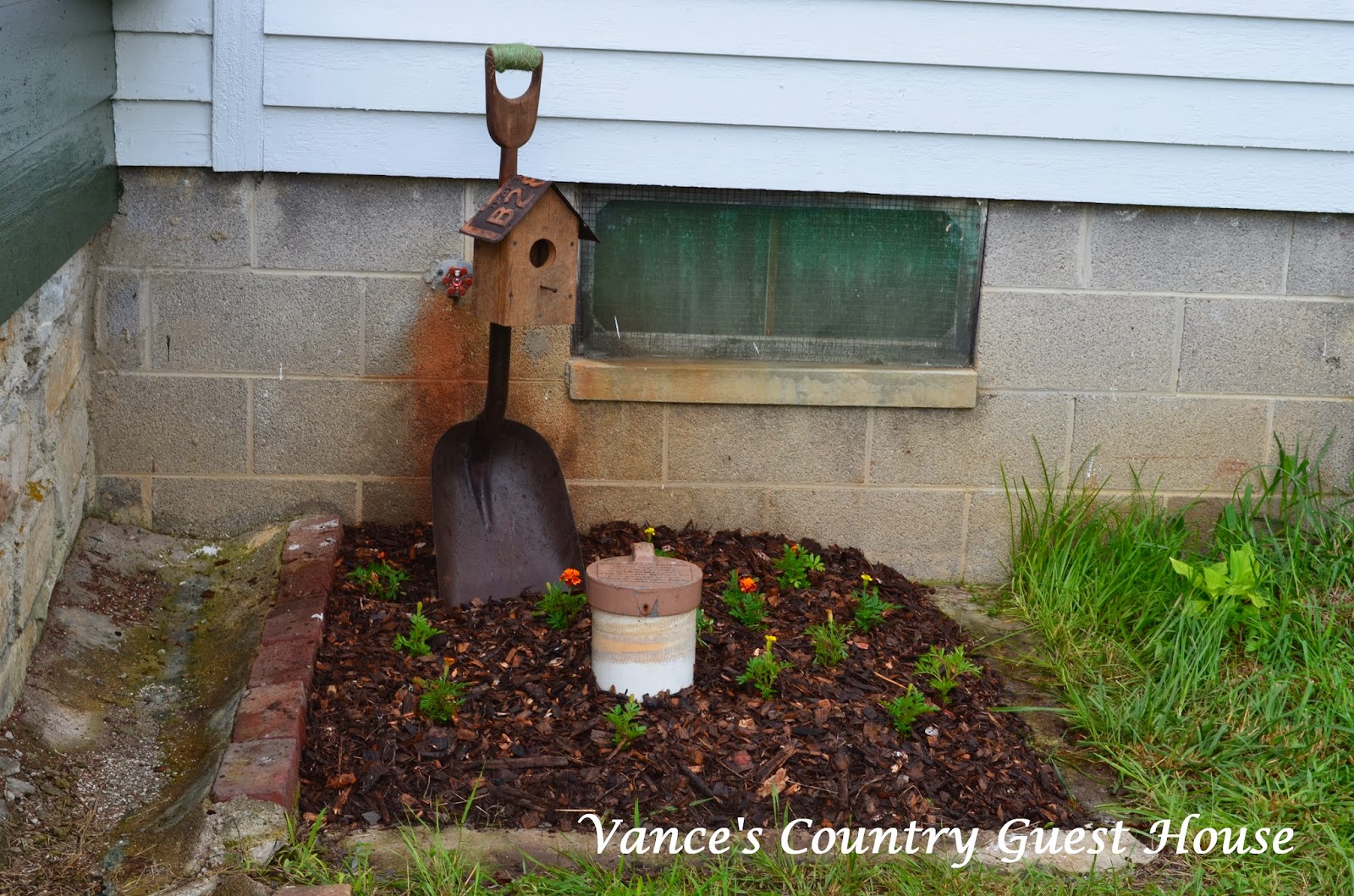 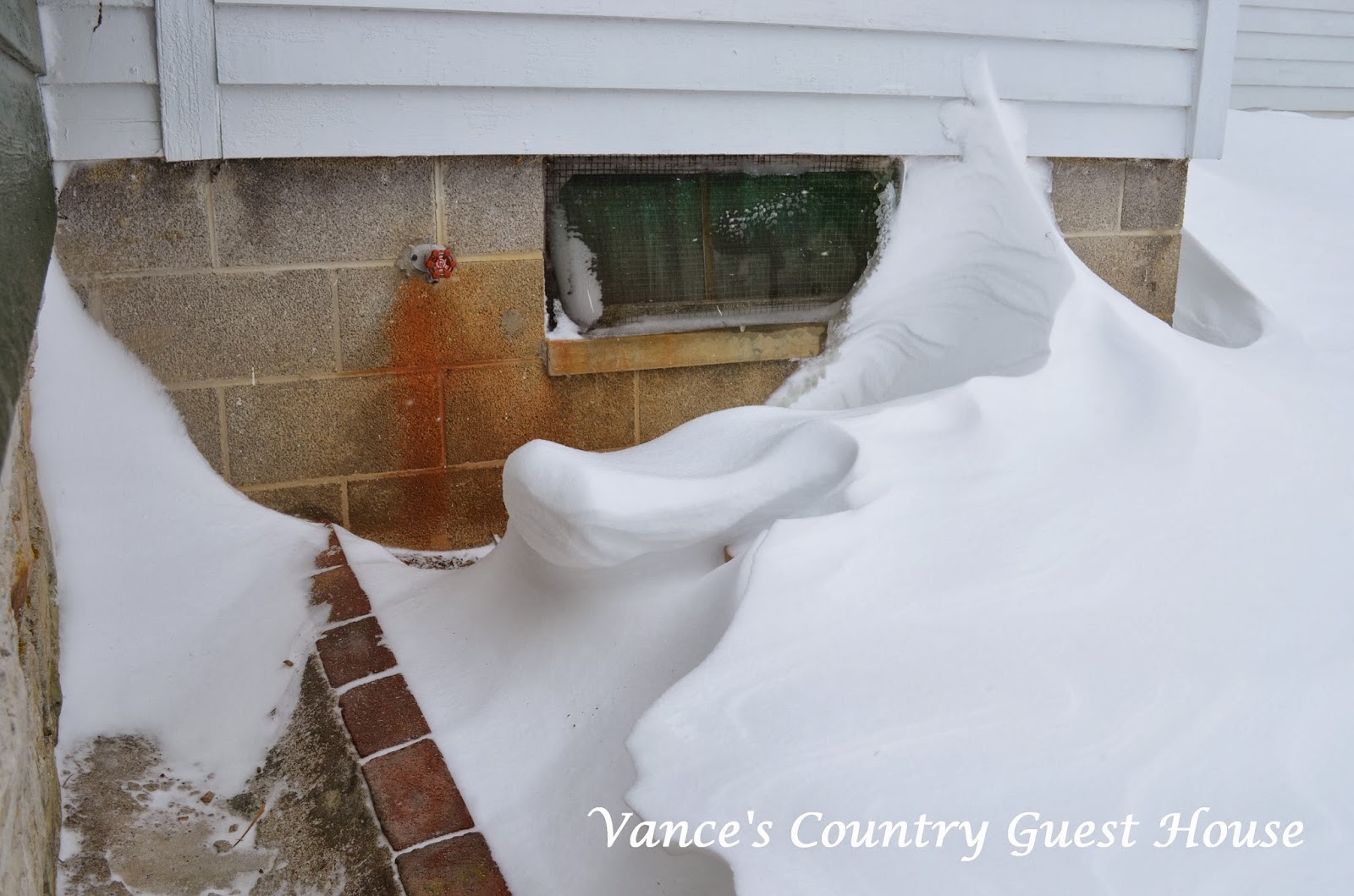 As long as you can navigate a couple of steps, getting into the back porch is usually no problem. 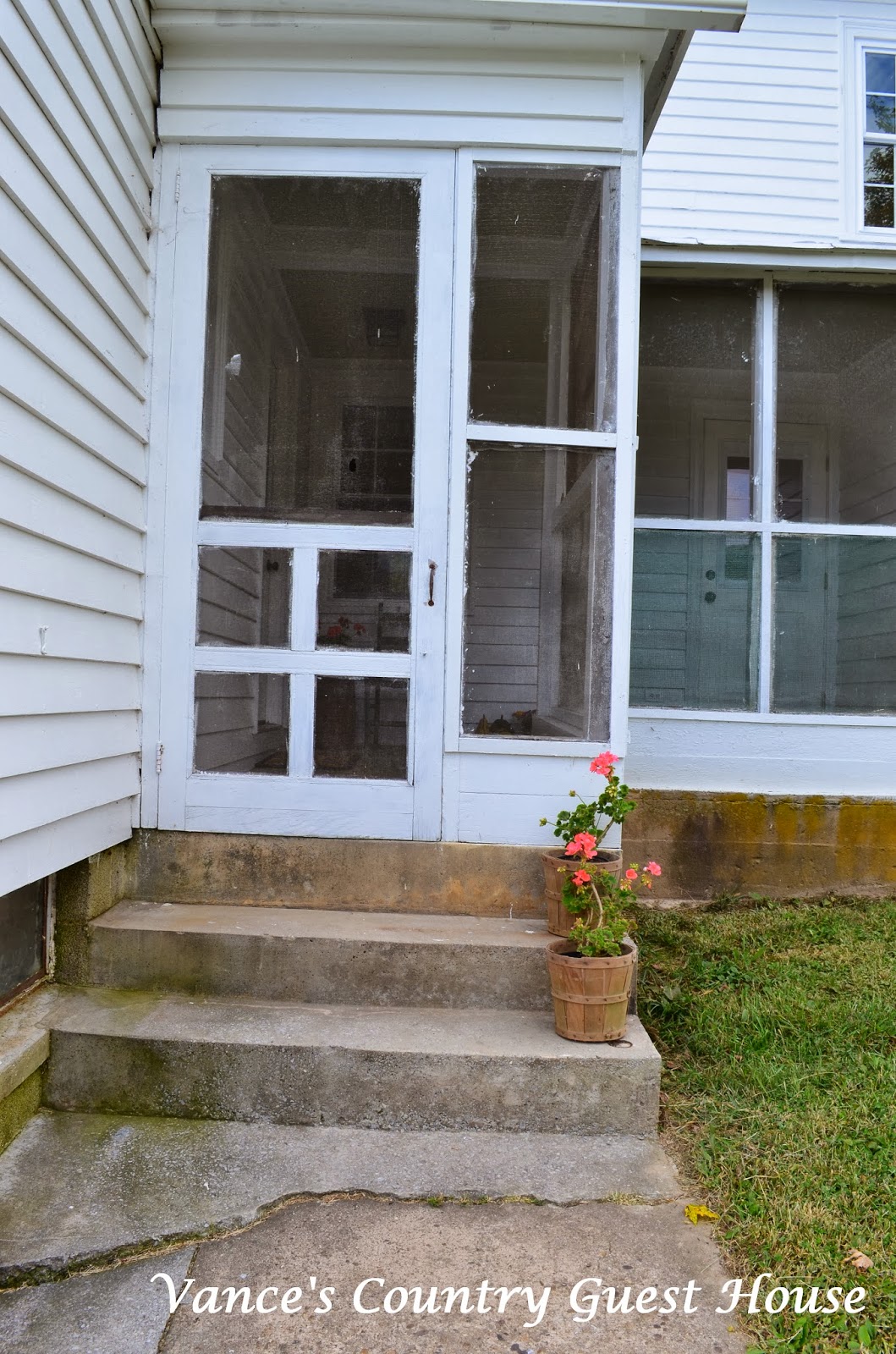 Last Thursday, however, was a different story. 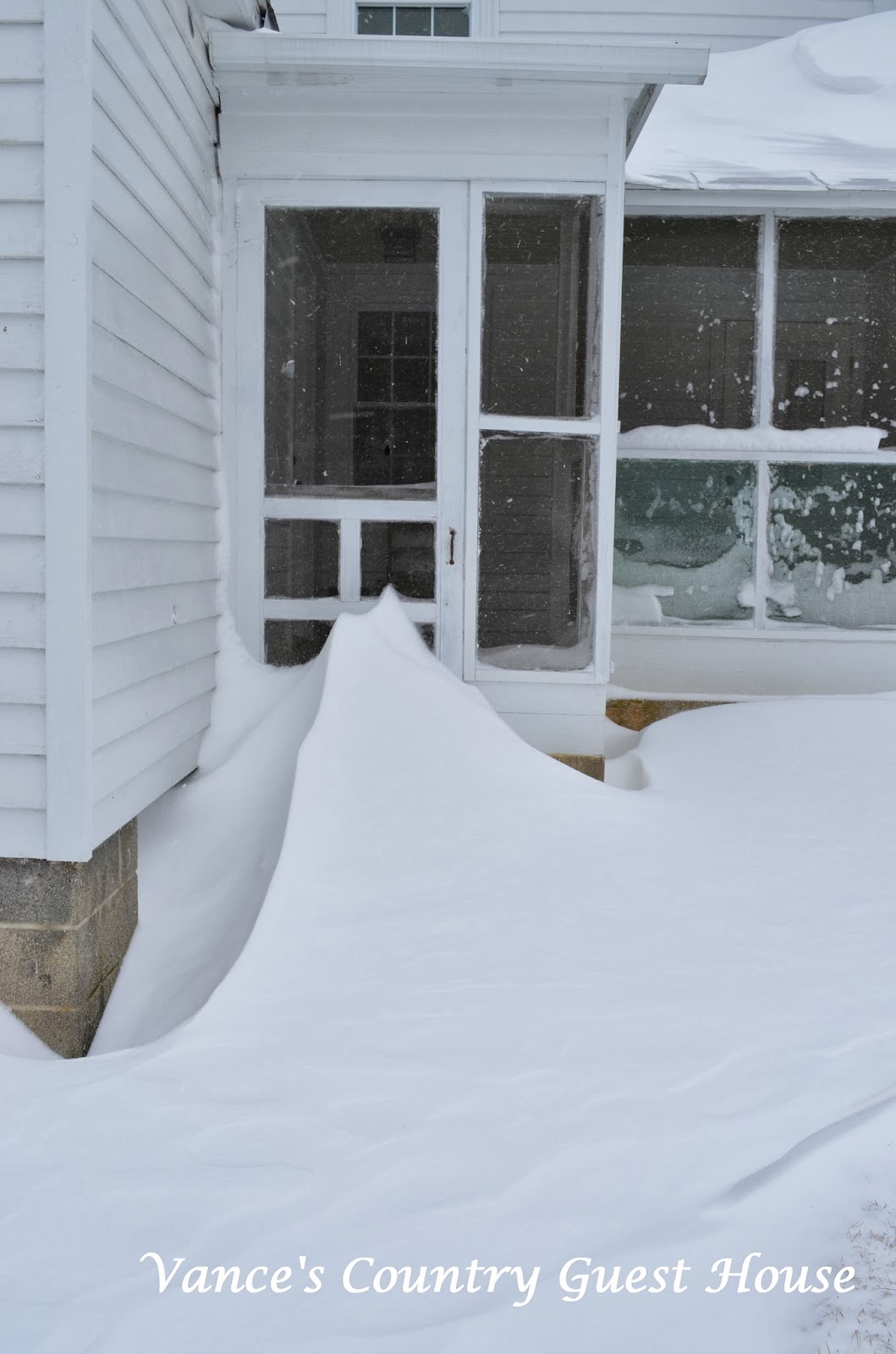 Painting the roof on a hot summer day was stifling work. 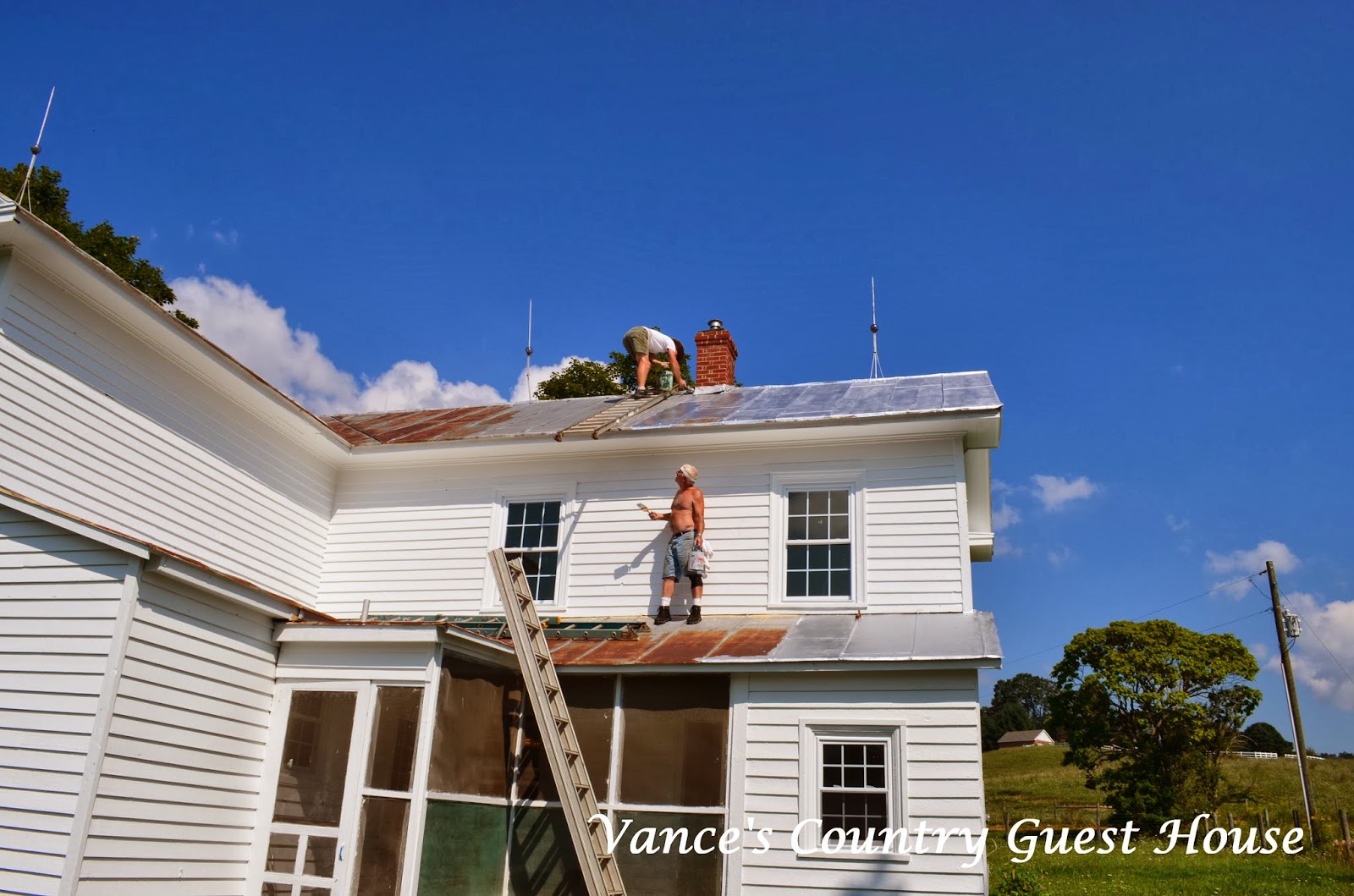 It wouldn't be now, if you could get to it. 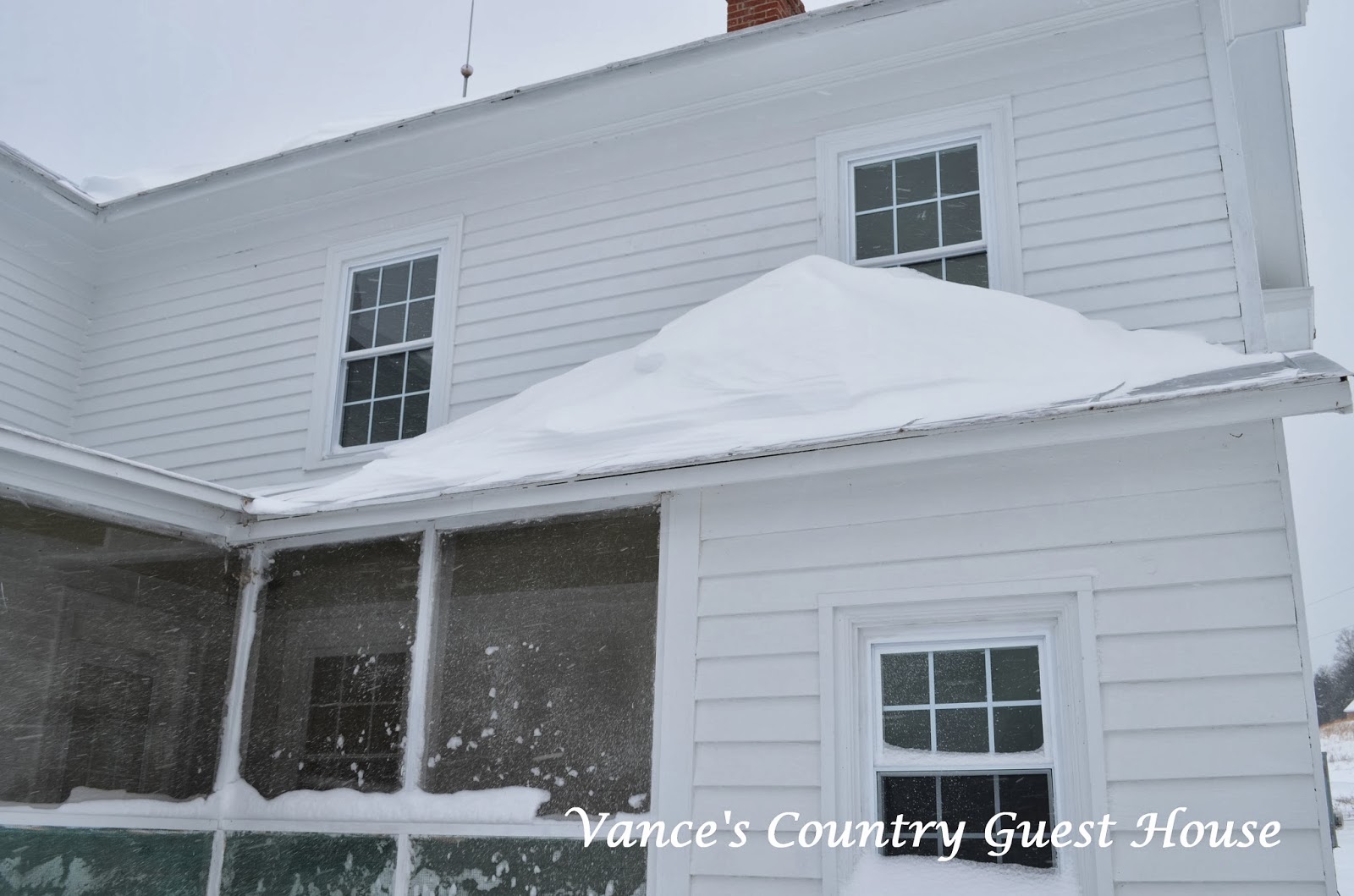 The view of the front yard changed quite a bit, from this... 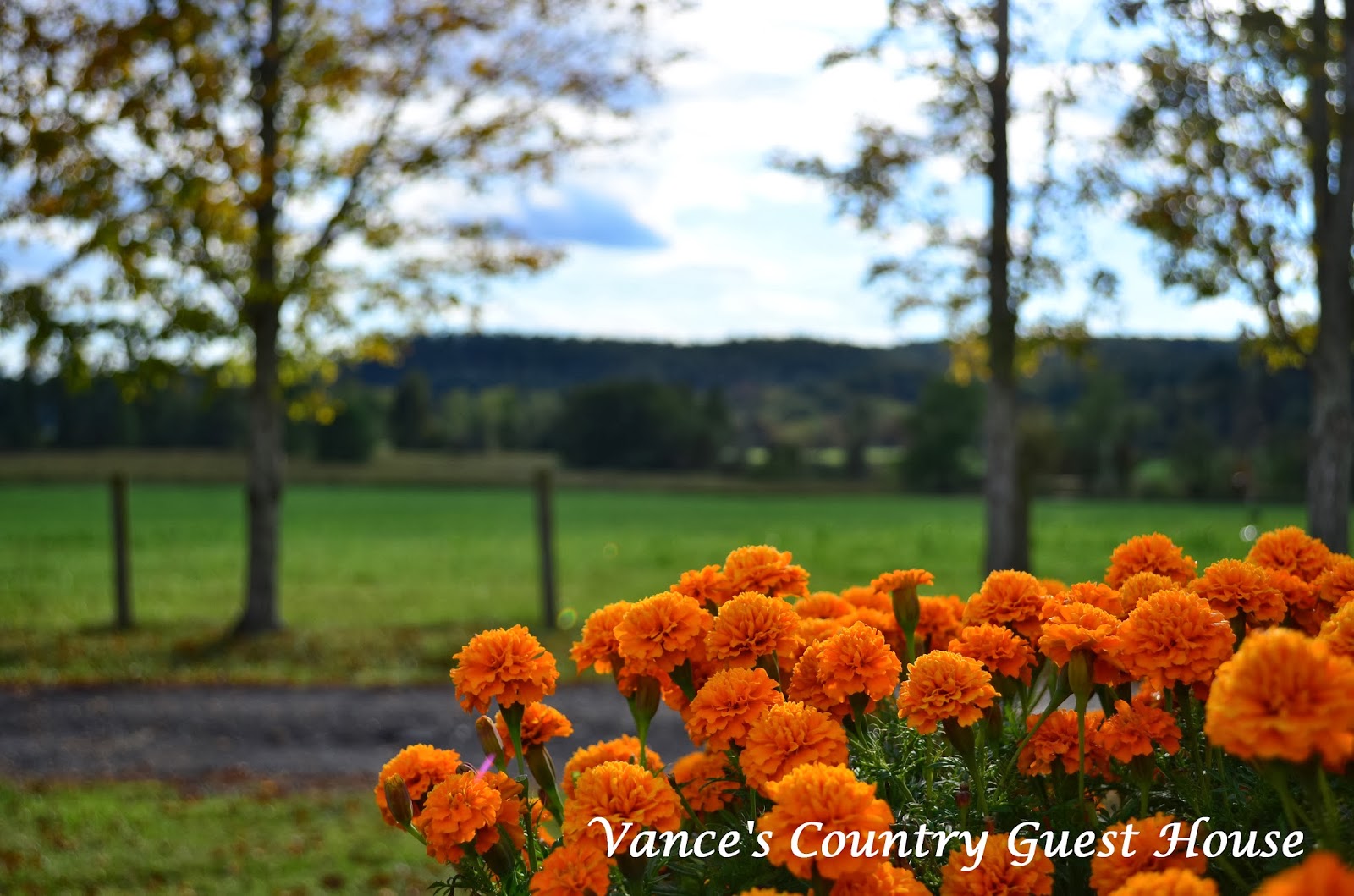 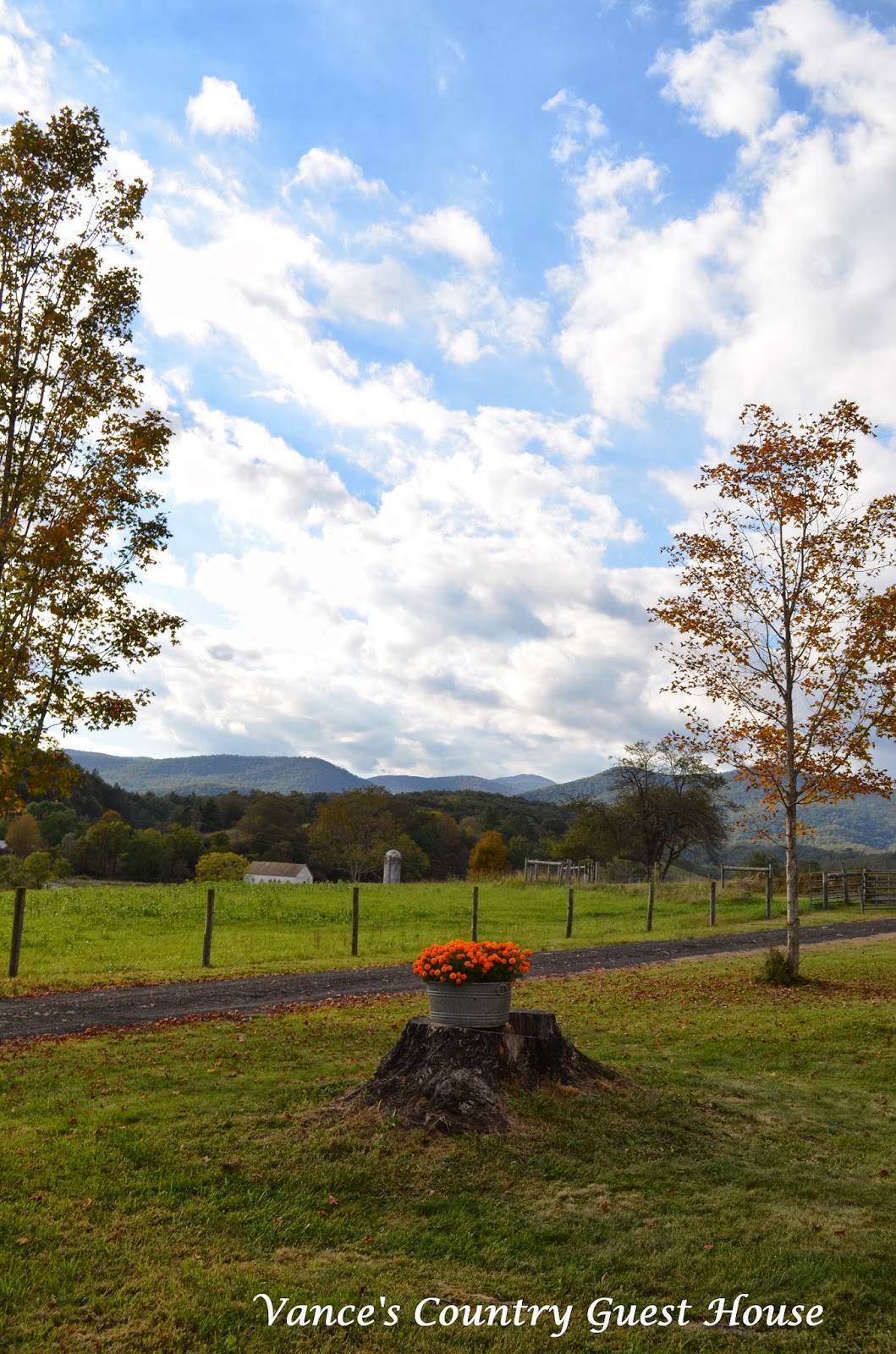 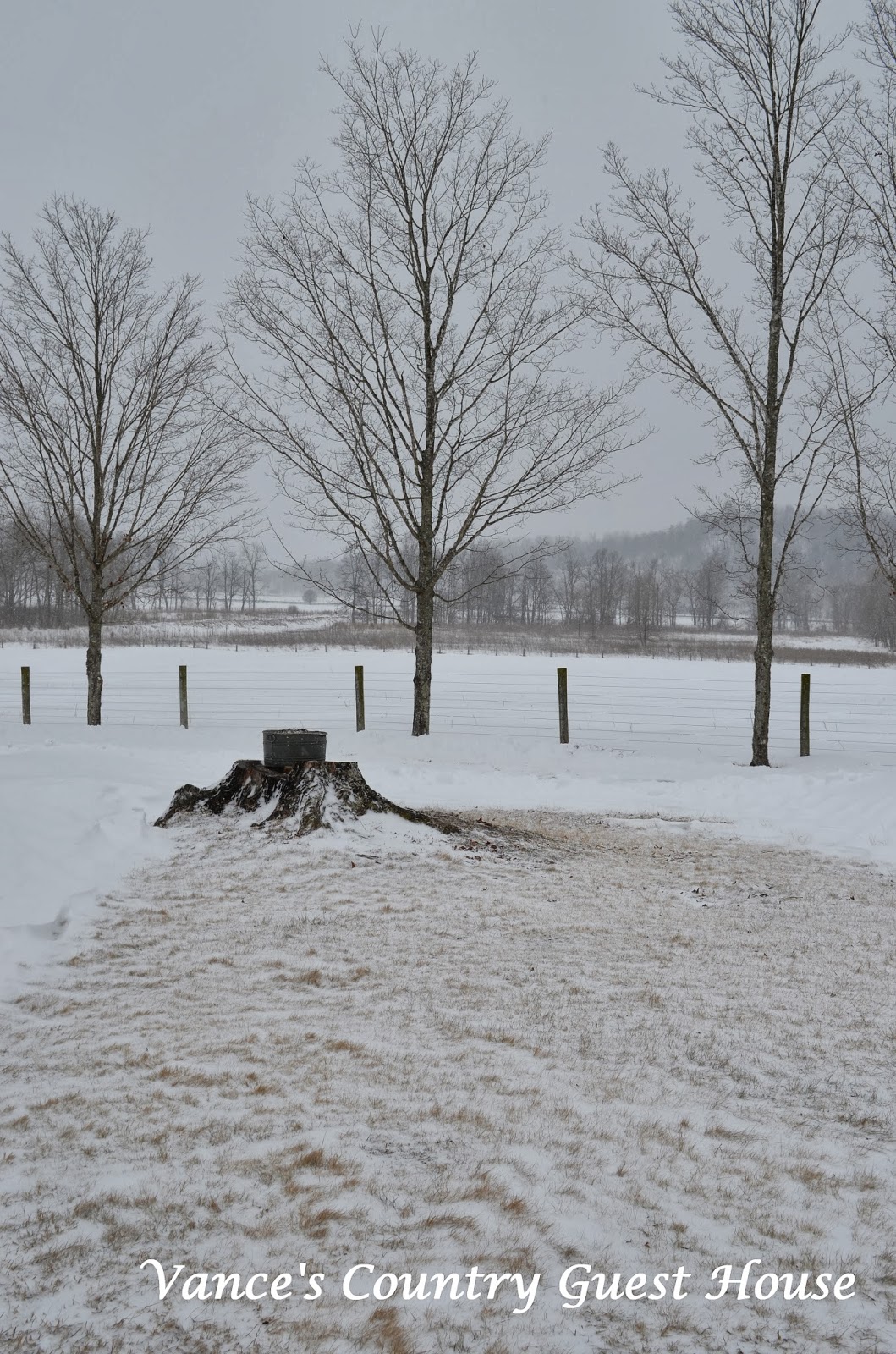 The house that looks so friendly in the warmer months... 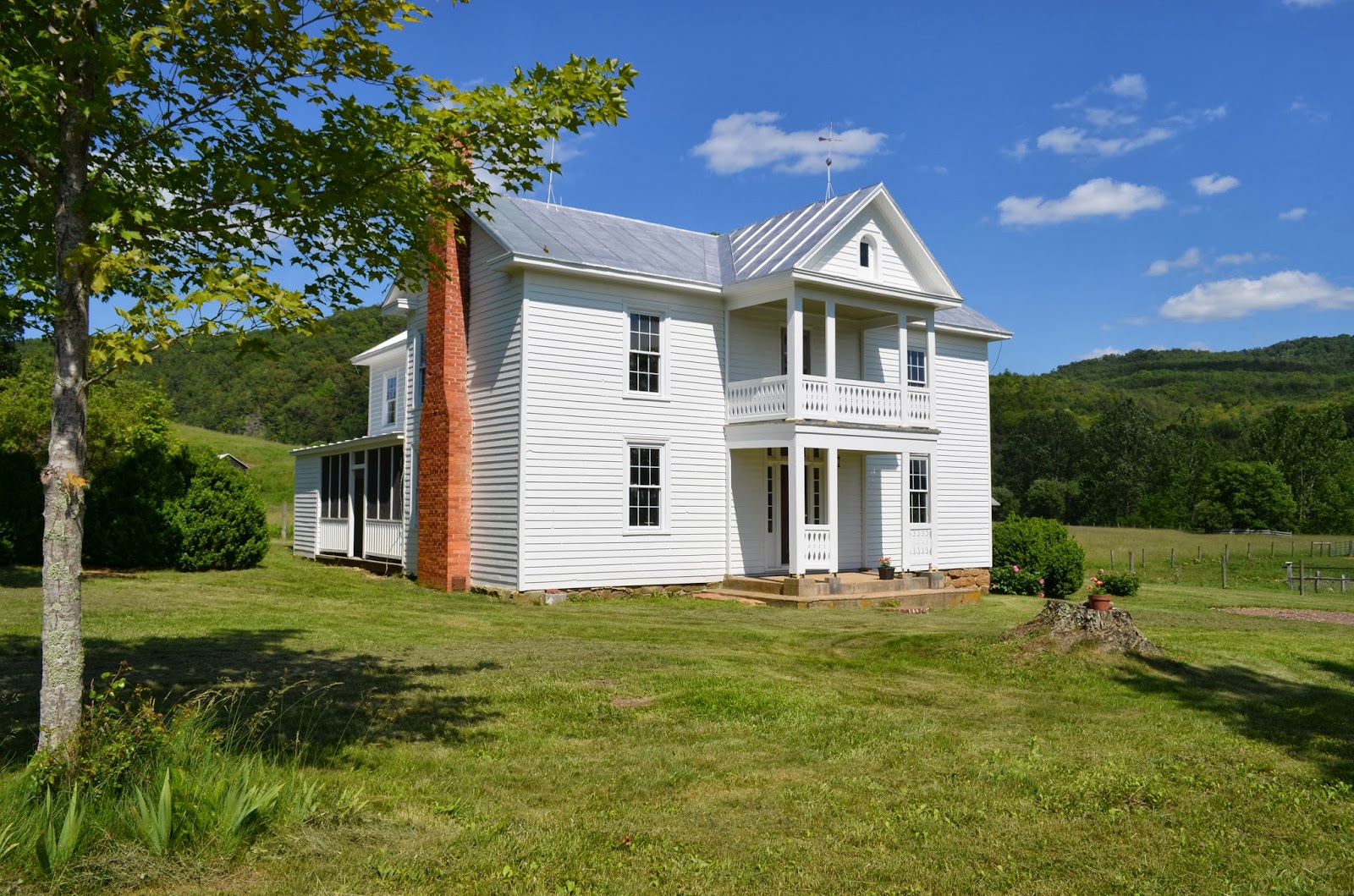 ...looked a bit lonely after the wind scoured the west side of the yard, leaving it bare
despite 13 inches of snow. 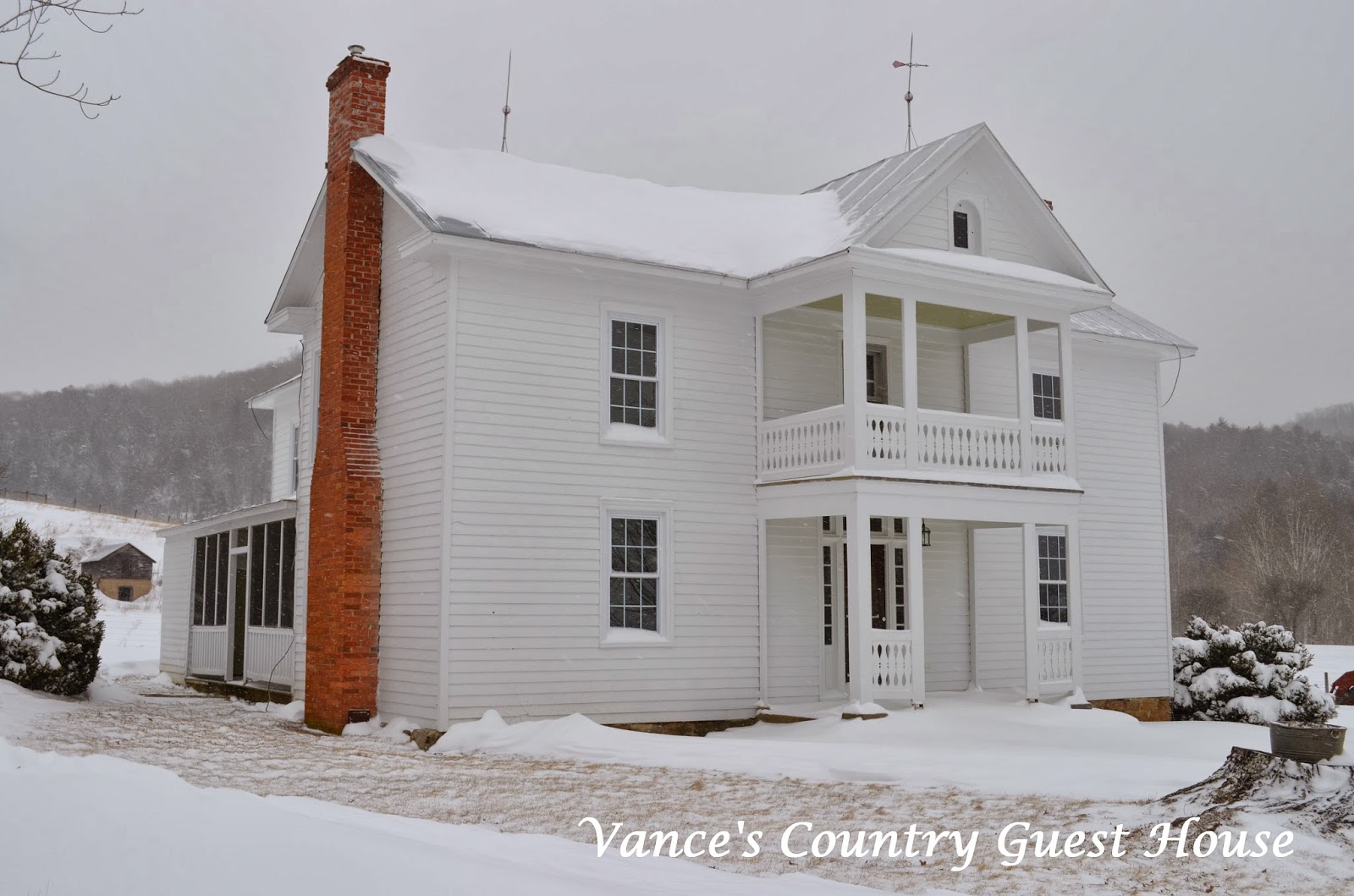 Right now, in the depths of winter's cold, we often find ourselves wishing for summer's warmth. And you know that when those sweltering days of summer arrive, we'll be wishing we had a brisk winter wind to cool things off. Right now it's hard to imagine mowing the yard in shirt sleeves, with sweat dripping from my brow, but when summer comes again it will be hard to imagine all this cold and snow. In another month, there will be a warm breeze sneaking around the eaves. A month after that green grass will be starting to show, and a month after that, we can start to plant gardens, maybe. This changing of the seasons never ceases to amaze me, and I'm glad to live where I can experience the glories and challenges of all four. God's timing is pretty sweet, bringing in a new season just when I'm getting tired of the present one. Although sometimes it seems that winter will last forever, it won't, and neither will the winters of our souls. When life is hard and all seems cold and difficult, we do well to learn from Mother Nature. Be it early or late or right on time, spring always comes. 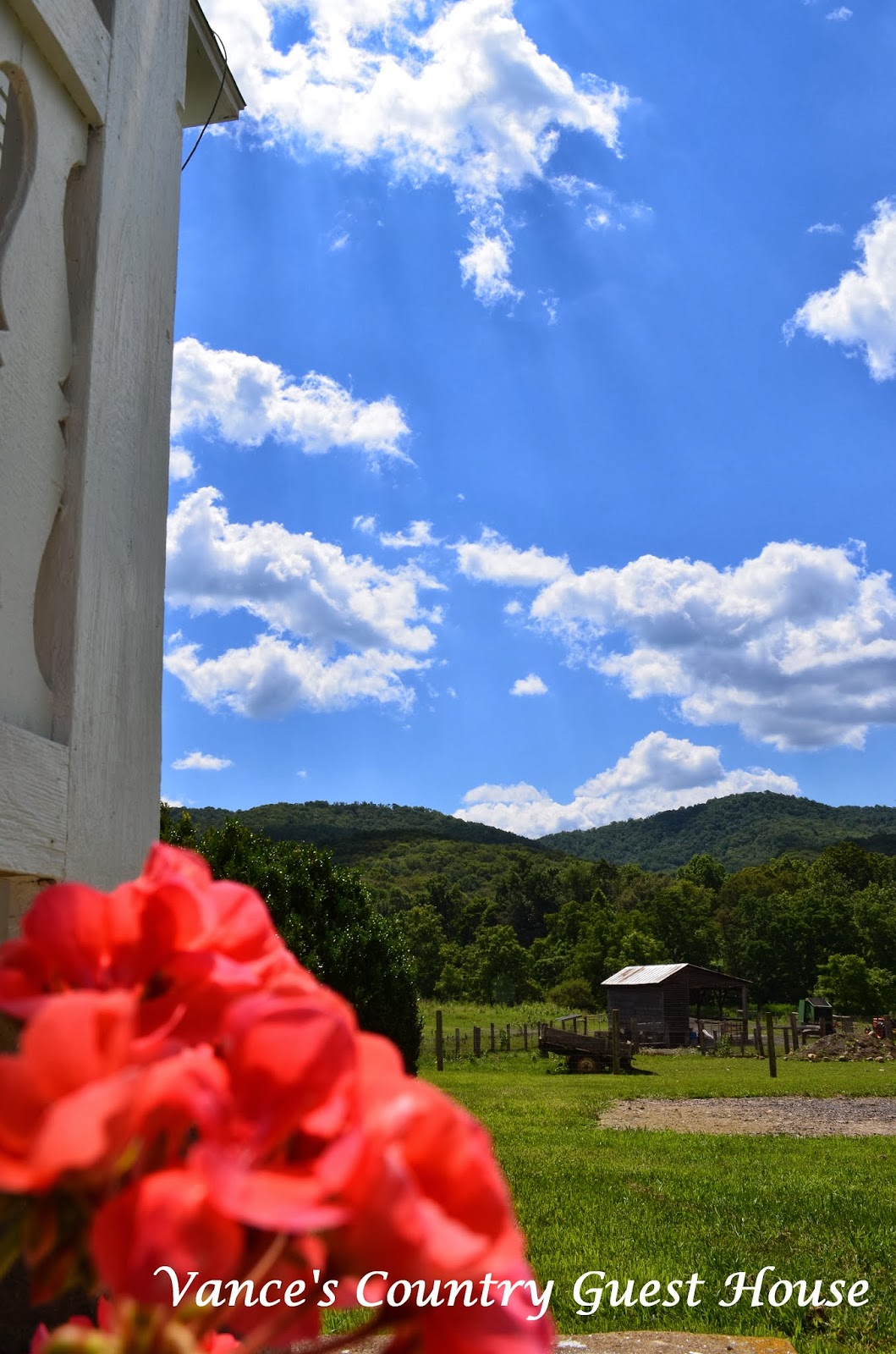 Email ThisBlogThis!Share to TwitterShare to FacebookShare to Pinterest
Labels: Holidays and Seasons, Ponder This..., The Guest House

There are many winters here in the western mountains of Virginia that bring no snow to speak of. Just an inch or two once in a while might be the pattern for the season. And then there are winters that put snow on the ground in December and keep it there until March, but those are few and far between. This winter has been marked by the extremely cold temperatures, along with a "fair to middlin' " amount of snow. Until last night, that is!

We are right in the path of this nor'easter that is hammering the mid-Atlantic, and this morning we got up to 15 inches of beautiful snow. Thank goodness it's not heavy and wet like predicted, but dry and powdery. This photo was taken just after daybreak. 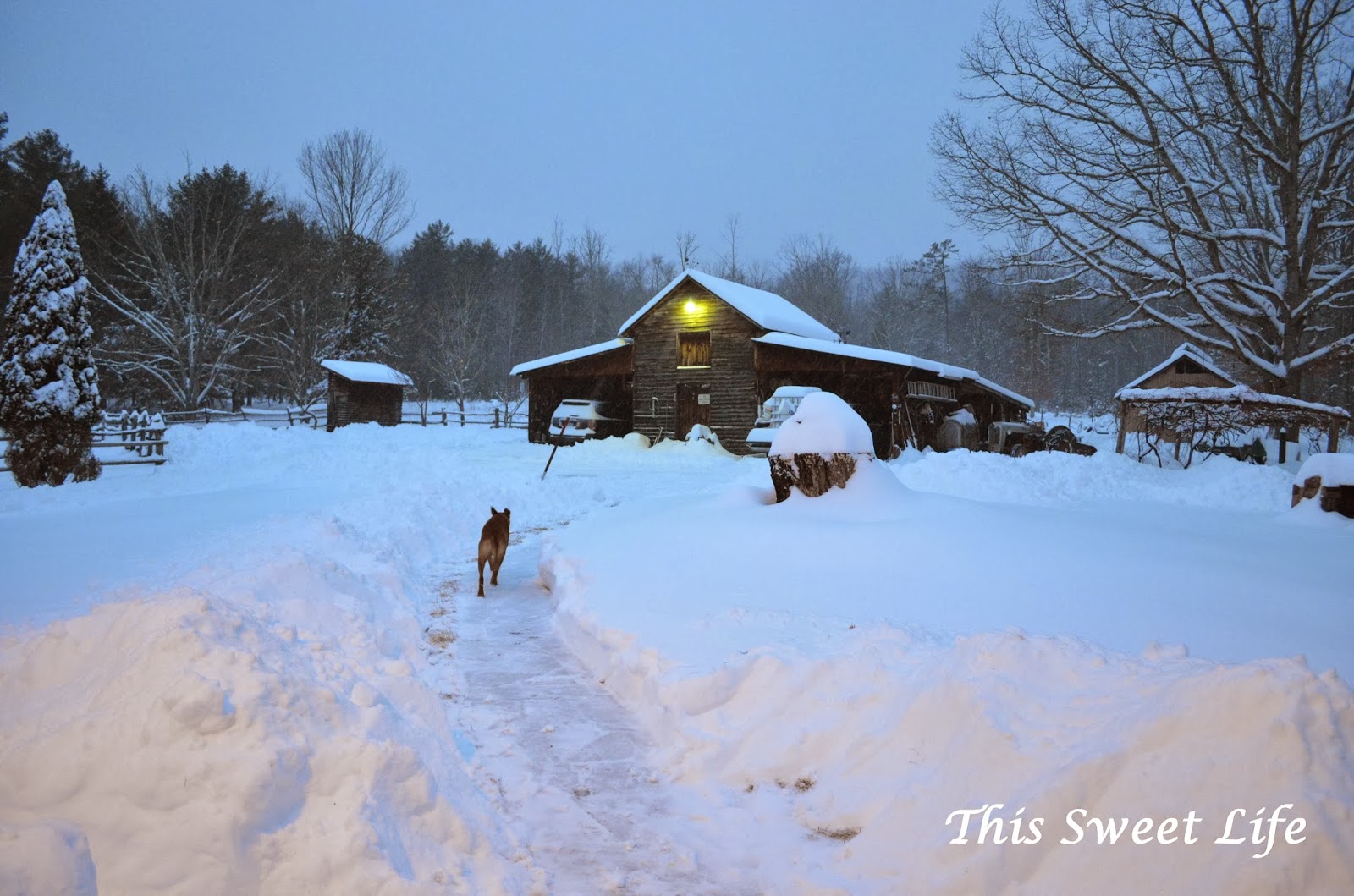 Yes, the walk is already shoveled, and you can't see that the driveway is already plowed, along with a with swathe through the front yard for the dogs. My husband is not one to enjoy a cozy morning inside, relishing in the warmth and comfort while the snow piles up! He was outside by 5:00 a.m., keeping the snow at bay and hoping the wind doesn't start to blow. 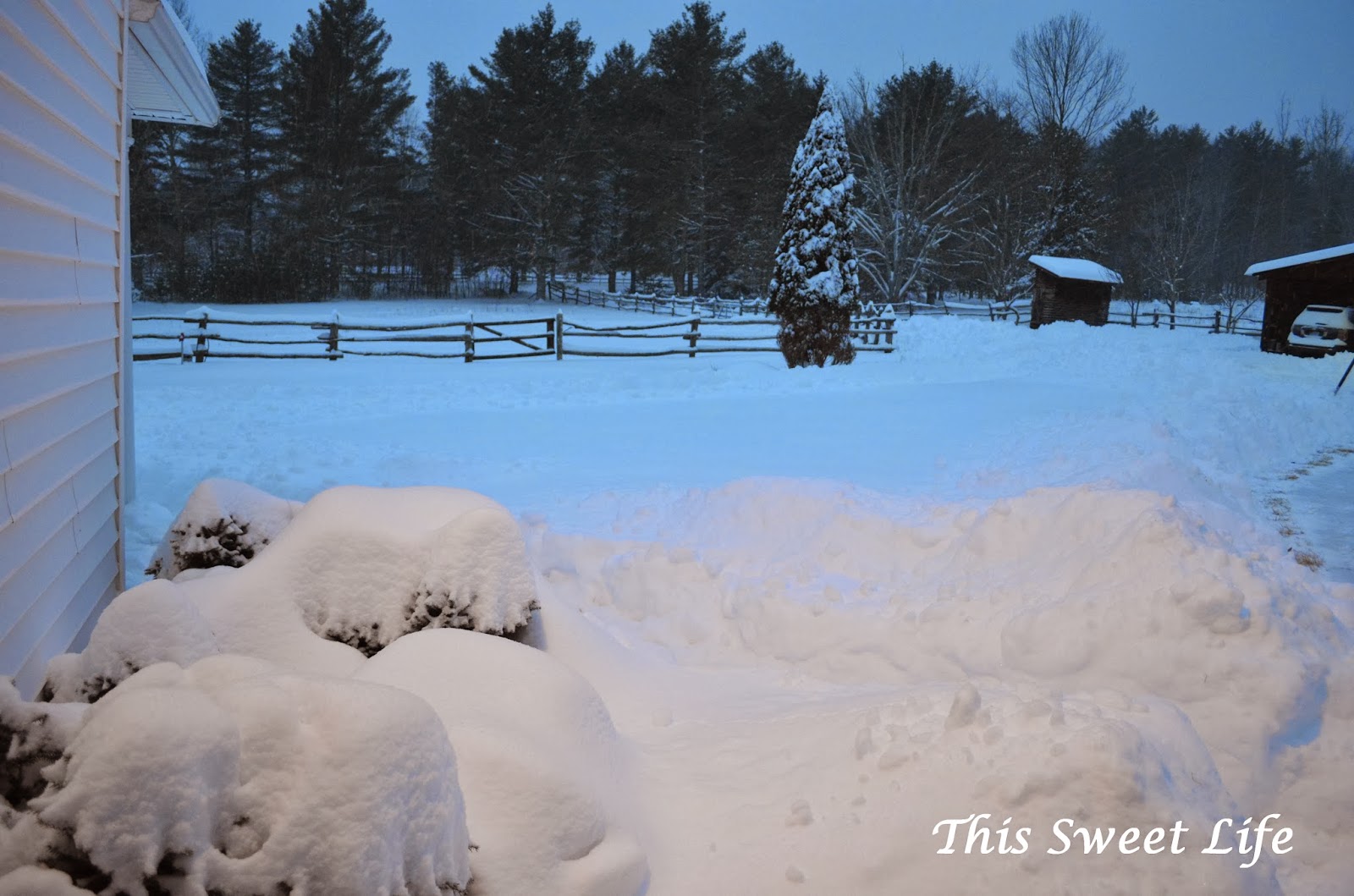 The dogs were reluctant to follow Robin outdoors, but eventually Mother Nature's calling was just too strong and they had to go. Really. It was easier for the big dogs to find a workable spot for their needs, but poor little Cheyenne was bewildered for a minute or two. As she trotted up and down the walk Robin had shoveled, with the snow higher than her head, she finally found a spot to make do until we opened up that big path through the yard. Now all four dogs are inside with me, while Robin is still fighting snow outside. We have smart dogs.

It's just past 10:00 a.m. and the snow is still coming down, although the sky seems to be getting lighter. I like snow and the homey feelings it evokes. It's a great opportunity to hunker down indoors and do something I enjoy, like reading a good book, making something with my hands, or cooking and baking. Robin, on the other hand, has to be out in it to feed the livestock and make sure they can get to water. And, if he doesn't do all that plowing and shoveling, we'll be stuck for a long time. Once the melting begins, all those paths he keeps clear will be the first to dry up and return to normal, making it so much easier to get from the house to the car. 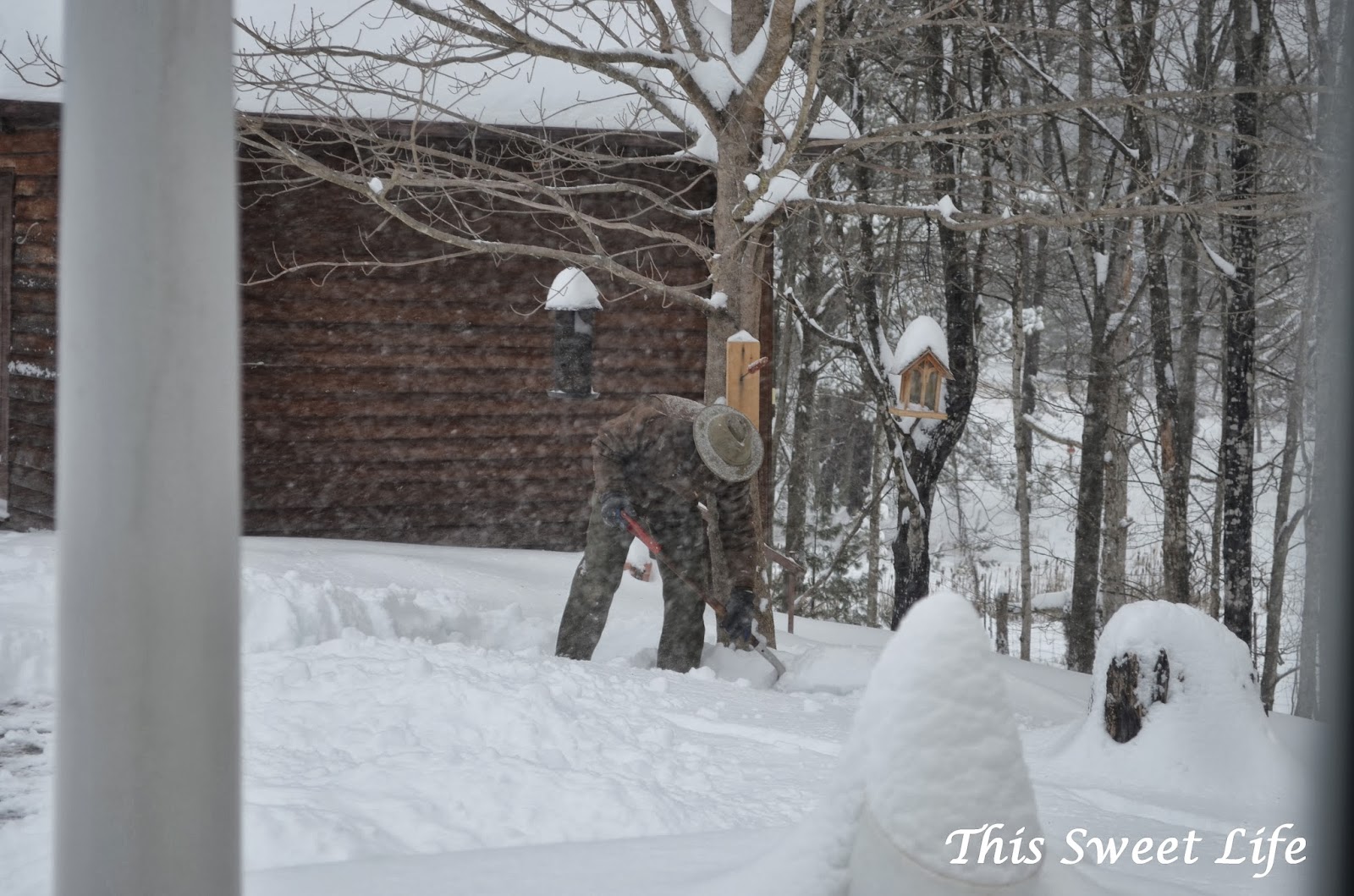 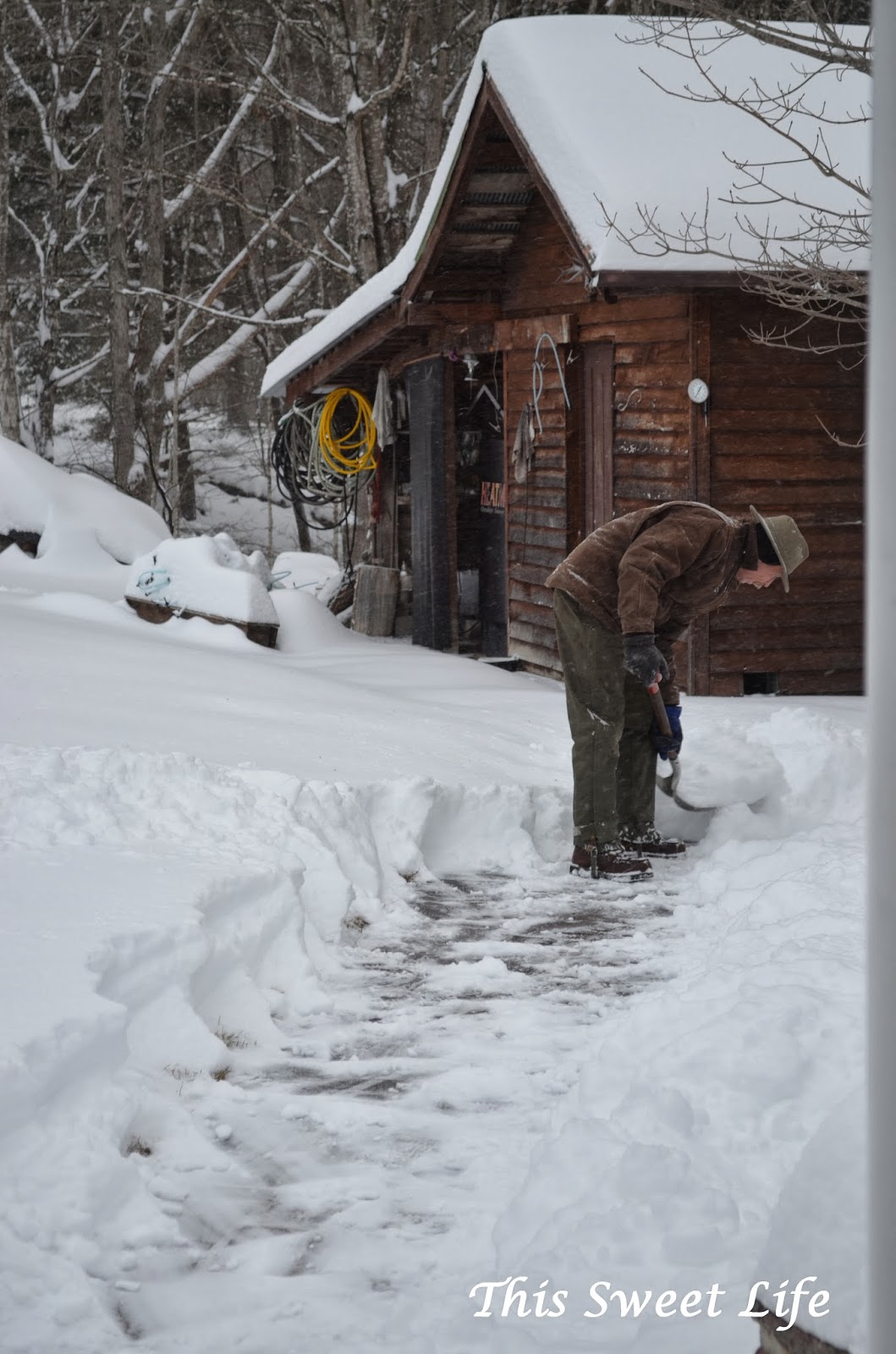 How about were you live? Are you relishing in a gorgeous winter snowfall or hating every minute of it? There's really no use to worry and stew about it. None of our misery will make it go away any sooner, so we might as well enjoy the few sweet hours of peace and quiet it brings. It won't be long until the magic of this white winter beauty is gone. 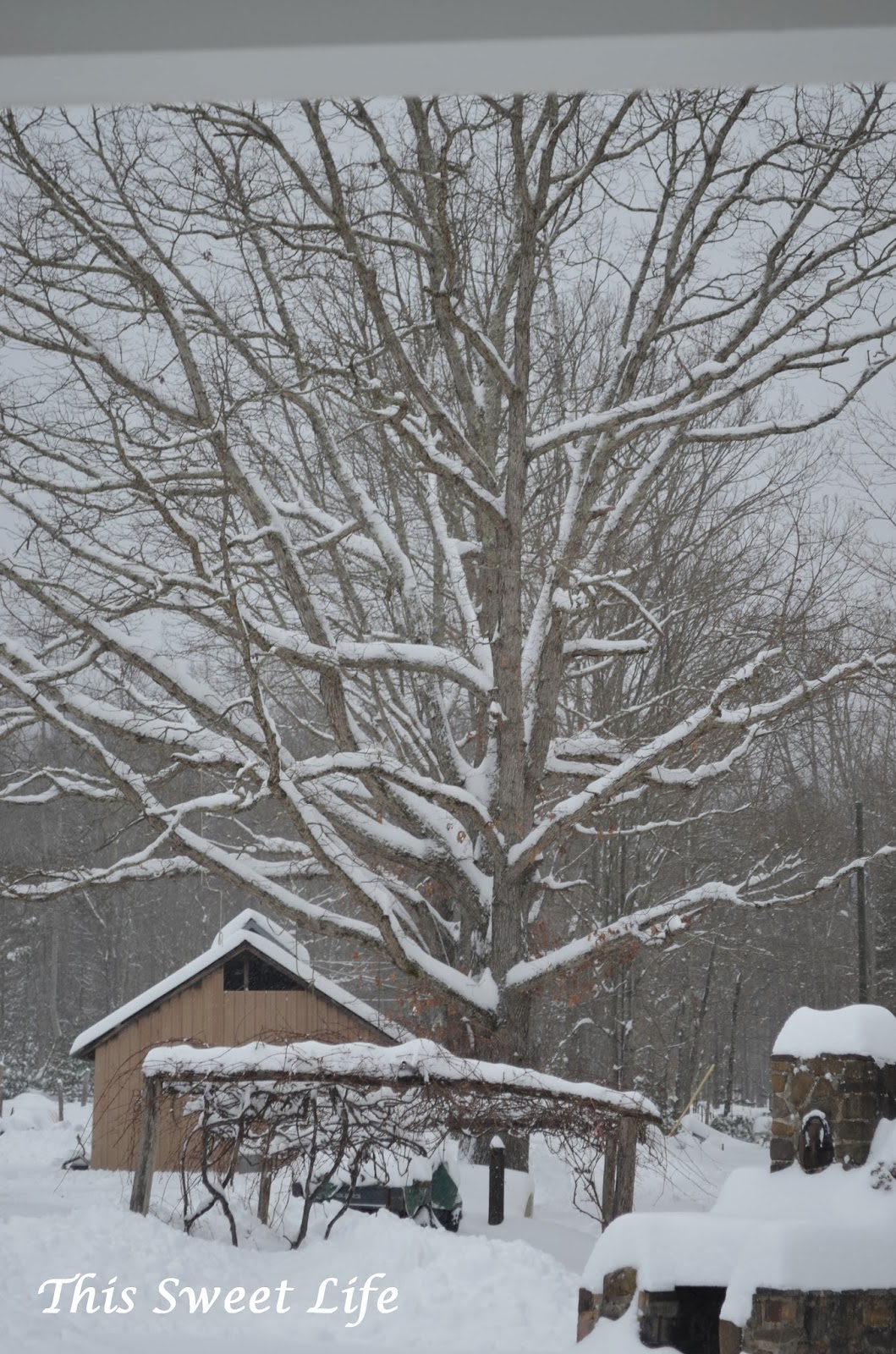 Email ThisBlogThis!Share to TwitterShare to FacebookShare to Pinterest
Labels: Dogs, Holidays and Seasons

I had great plans to go to downtown Staunton, Virginia for this challenge. Staunton is about 45 minutes away, and is a photographer's dream in many ways. It's filled with beautiful architecture from a bygone era, making for a myriad of photo opportunities. The weather, however, had different ideas! Frigid temperatures and merciless winds made tramping around city streets, camera in my shivering hands, not so enticing. I did make one attempt in our little county seat of Monterey, and dug into my archives for some photos a little closer to home. I might do my own street photography challenge during the summer months when I'm not shaking in my boots and can hold the camera still enough to get a decent shot!

Monterey is a tiny town of less than 300 people, probably. Don't let the sunny day fool you: it was about 12 degrees! I braved the cold long enough to get a few shots, none of which were what I had in mind. These are the best of a ho-hum group of photos.

This photo was taken looking east; that's Jack Mountain in the background. When I first moved to Monterey a little over 30 years ago, I rented an apartment above this store in the foreground. Its official name is "H & H Cash Store," but most everyone calls it "Jack's." No matter that Jack, who ran the store for many years, has been dead a long time and his son, Mike, is now the proprietor. As far as I know, no one calls it "Mike's" store. 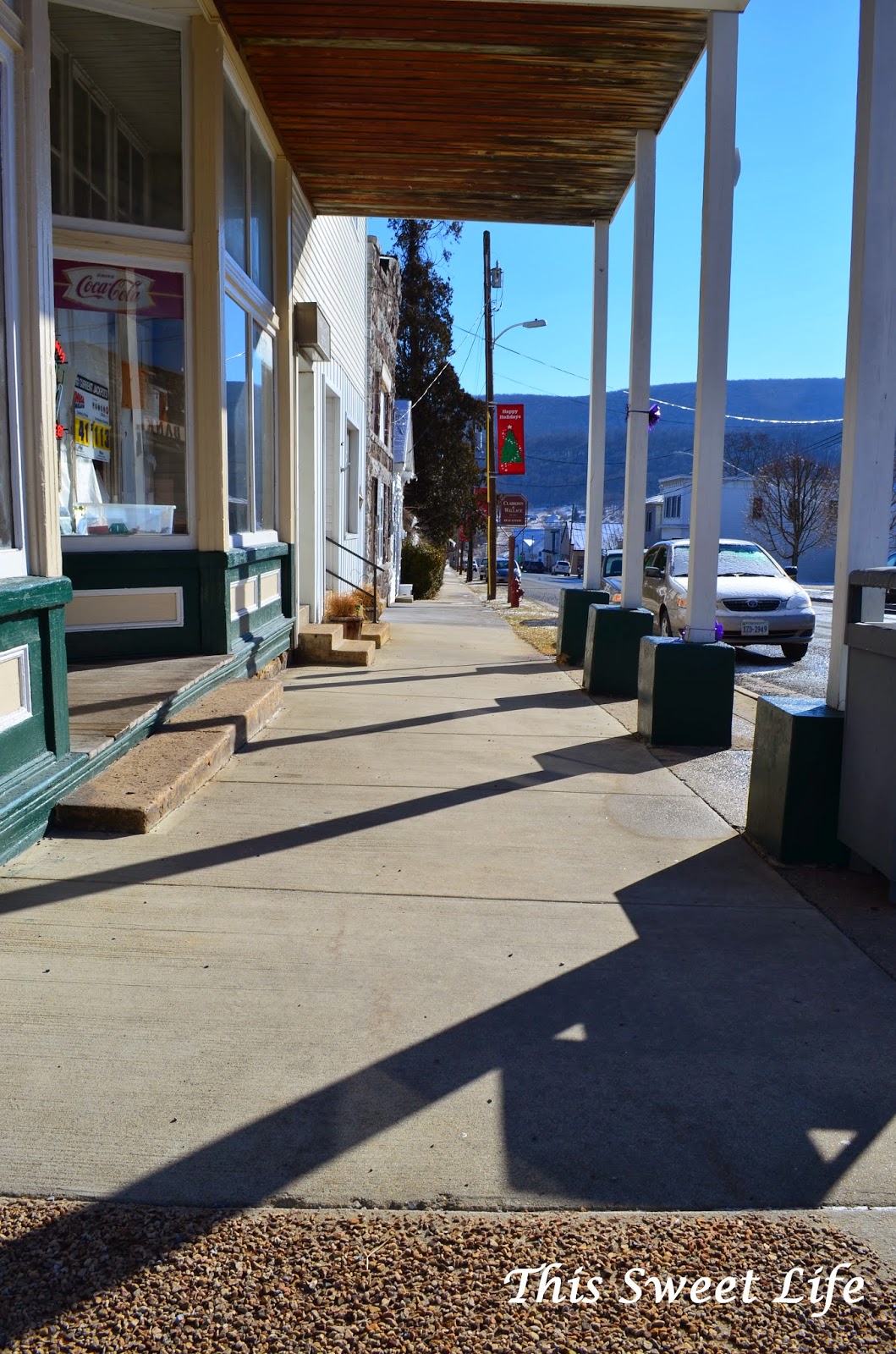 Just down the street from the photo above is this woodworking shop. David, the master craftsman here, is the husband of Julia, my friend and fellow school librarian for 20 years or so. I thought the paper snowflakes in the windows created some visual interest. I bet daughters Grace and Mary Winters had something to do with putting them there! 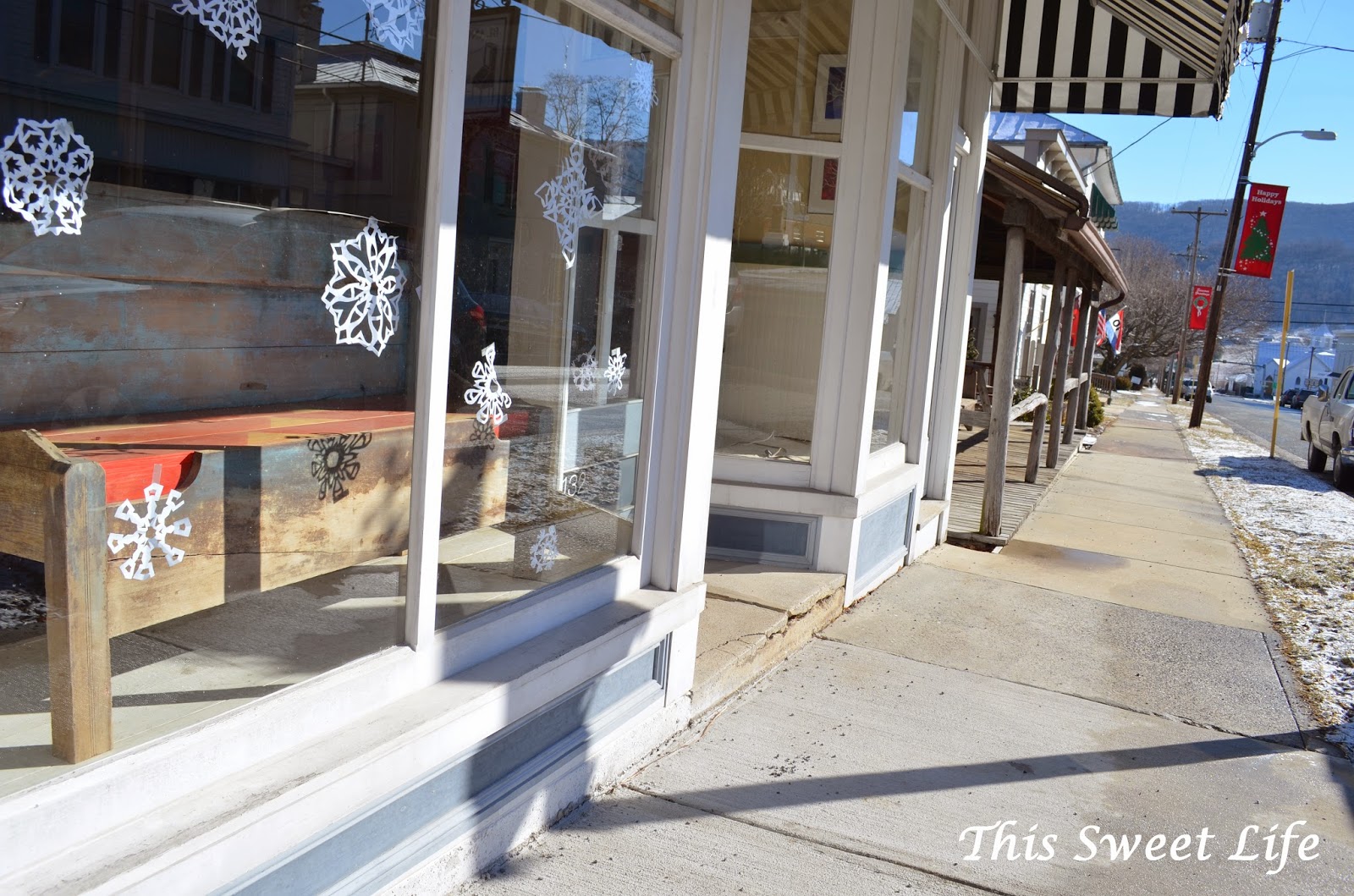 Next door to the woodworking shop is the oldest building in town. It's a log cabin, dating back to Highland County's formation in 1847. You can see the wooden posts of the front porch above. Below is the side door to the cabin, which now houses a second hand store that benefits our local humane society. Too bad I didn't have this one for the September challenge on windows and doors! 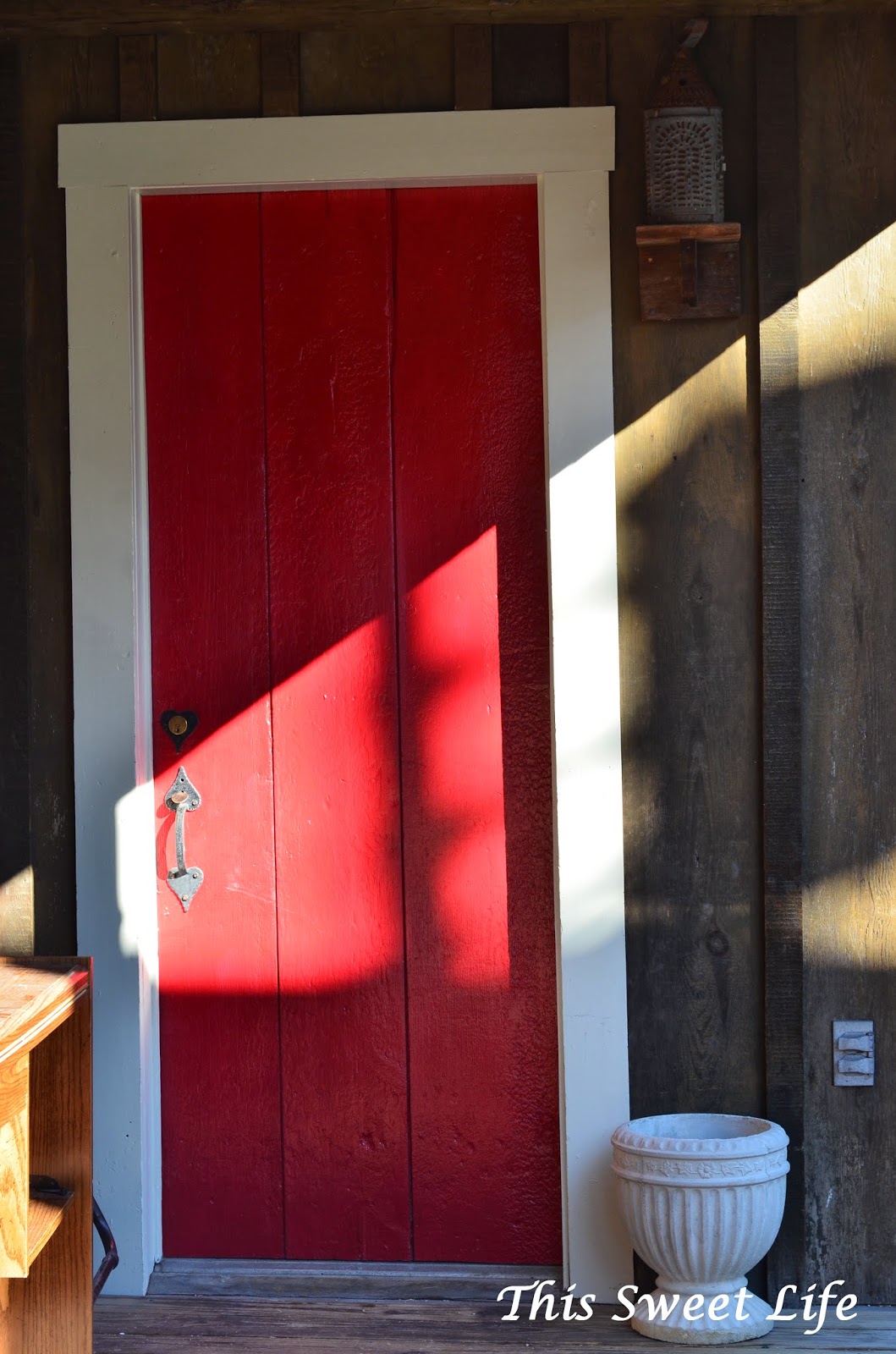 I poked around in my archives for these next two photos. This is the closest grocery store to my house, It's about five miles away, in the village of McDowell, whose claim to fame is a Civil War battle in May of 1862, when Stonewall Jackson turned the Yankees away and declared that, "God has blessed our arms with victory at McDowell today." This photo was taken when the sunshine matched the air temperature! 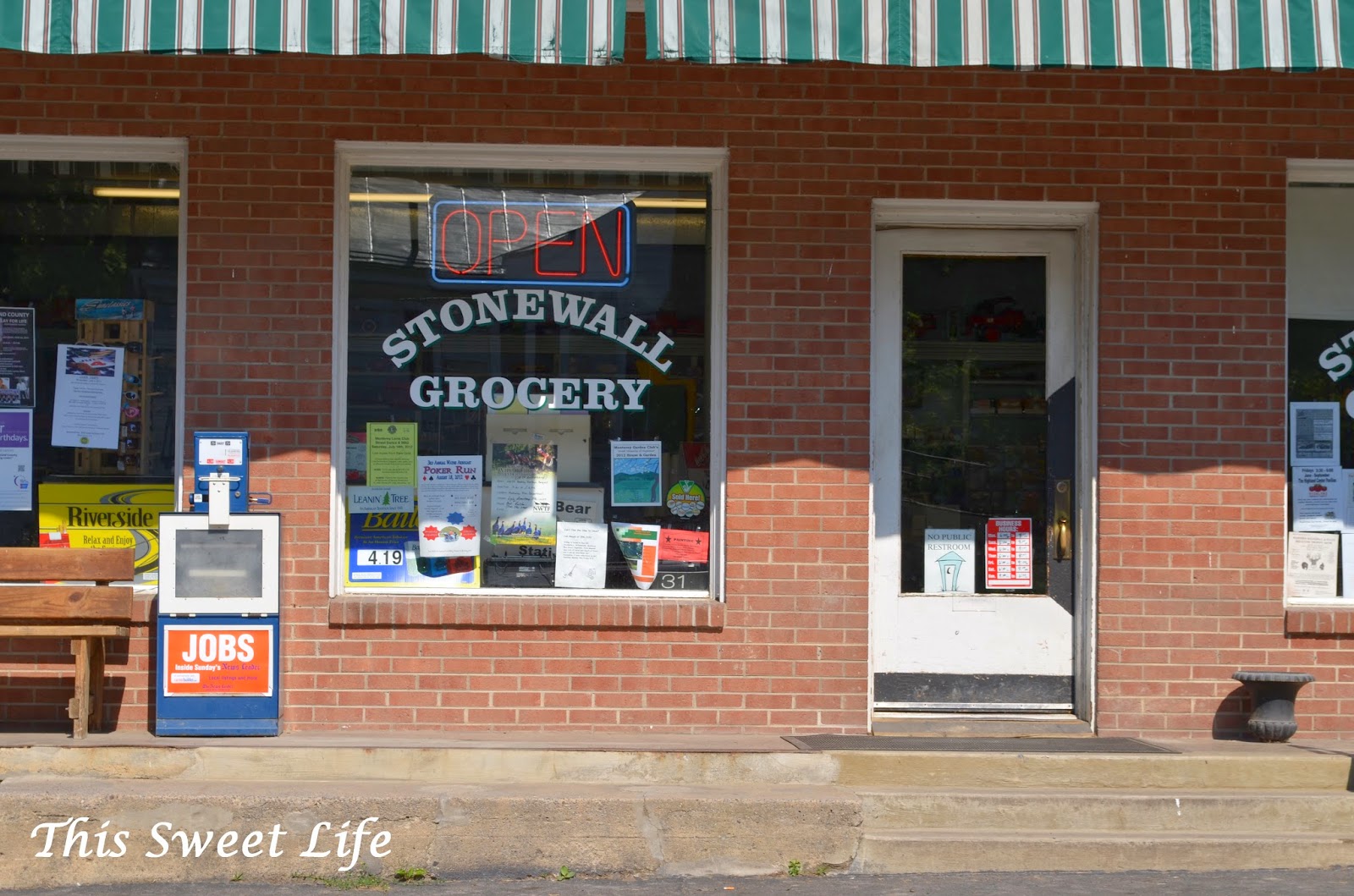 These last two were taken during the winter of 2010 when the snow was measured in feet more often than inches. That's the road in front of my house, which until a year and a half ago, was a dirt road. 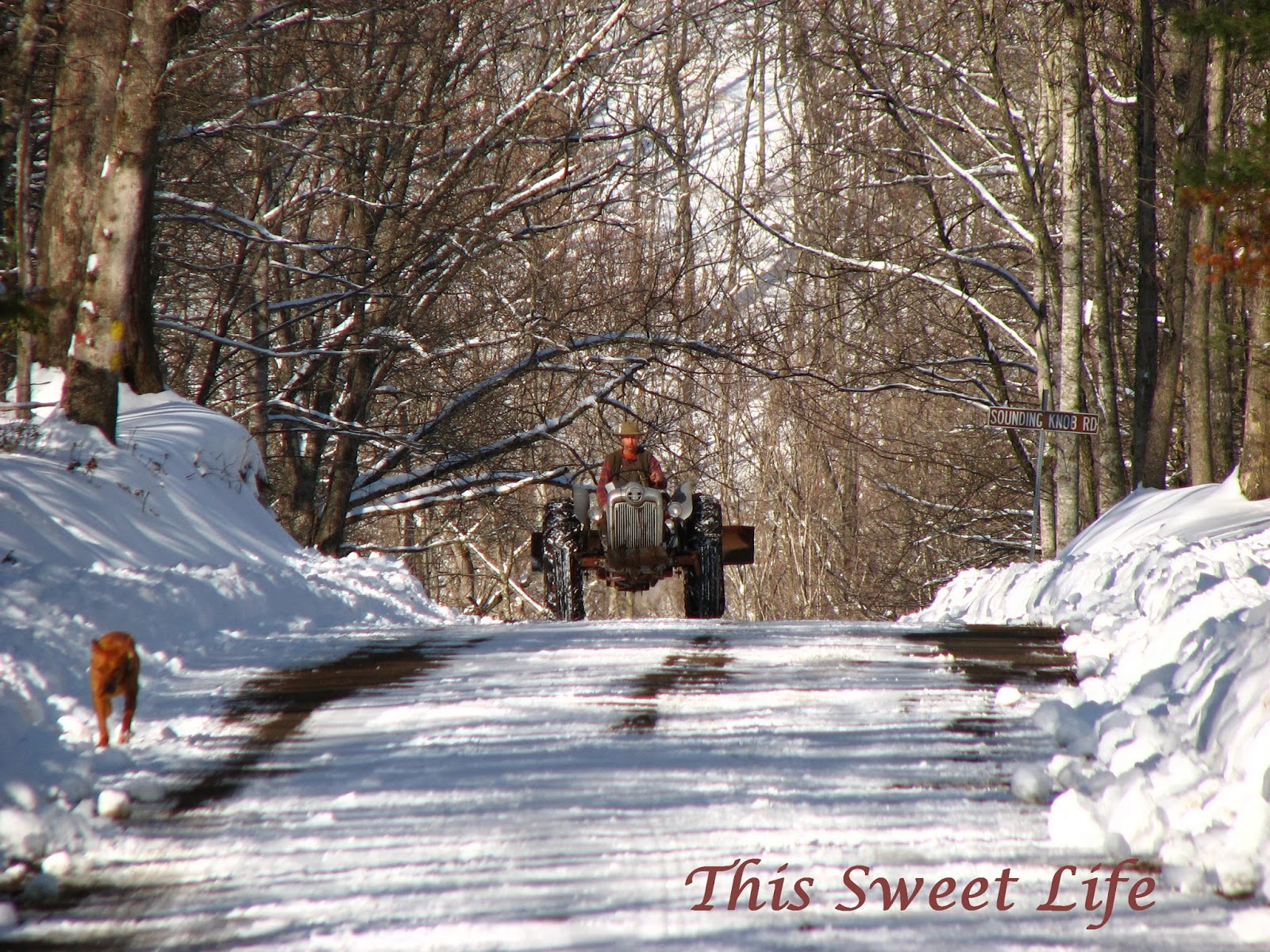 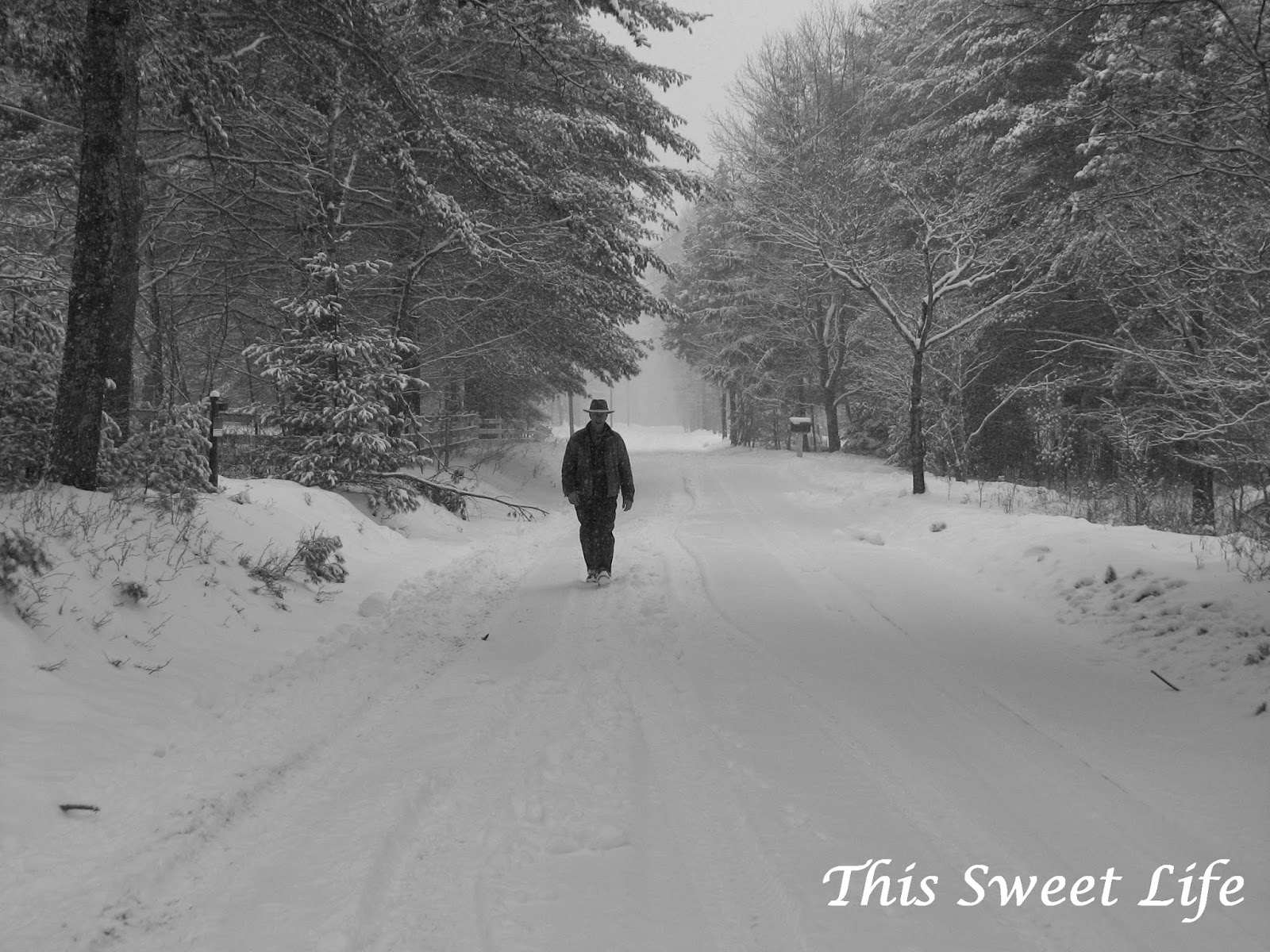 There you have my humble attempts at street photography. I hope I have more opportunities to practice this photographic genre. It's a fascinating one, with endless possibilities. Check out the fantastic offerings from all the participants at:

Thanks to Donna for organizing it each month!
Posted by Nancy Vance at 9:17 PM 10 comments: