What Would You Do?

As it usually happens around here, one thing led to another and now I"m stumped. It began when I took some geraniums in pots to the Guest House to put on the front porch, 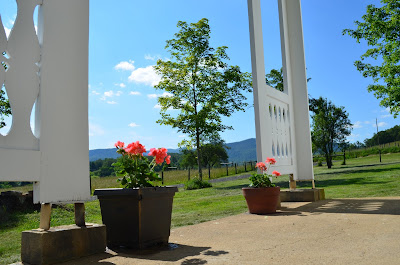 and some Calibrachoa for the well top in the back yard. 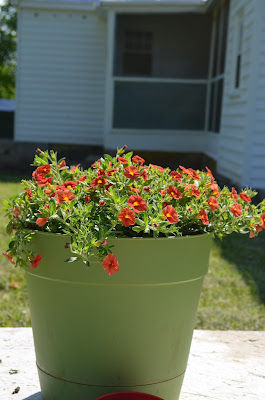 Later, I added a washtub filled with marigolds to the tree stump in the front yard. 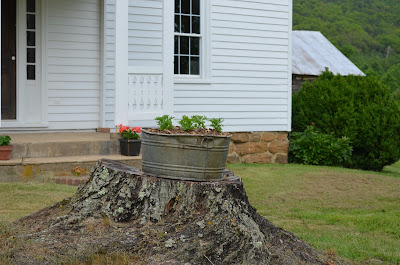 Of course, the flowers need to be watered regularly and since the outdoor faucet is at the edge of the yard, I need something to carry water in. 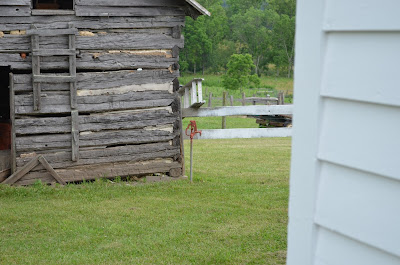 I mentioned this little need to my hubby, saying that a small bucket would work. I was already thinking of one of several plastic cups in the basement for dipping and pouring, so as not to douse the plants with a tidal wave straight from the bucket. My hubby, though, has vast resources behind the weathered walls of this unassuming shed. 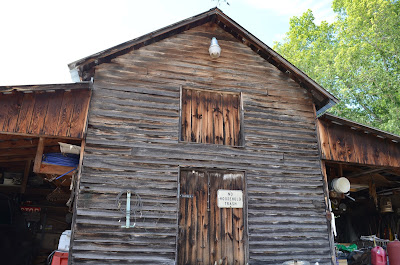 (If you ever see inside, you'll marvel at the irony of this sign he has posted on the door!) 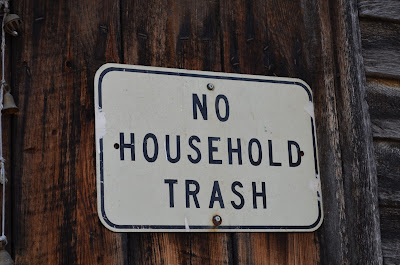 Although I haven't yet  seen the small bucket I requested, he did produce these two items for dipping: 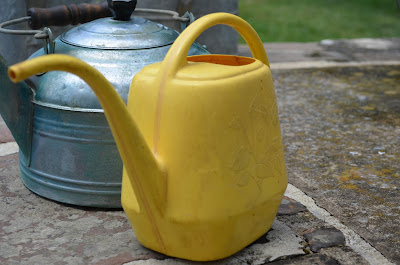 Now, neither one is what I had in mind, and I'll probably just use a plastic cup. But the little yellow watering can might come in handy if I put houseplants inside someday. I think I'll wash it up and store it under the Guest House kitchen sink for now.This other thing is actually a copper tea kettle. 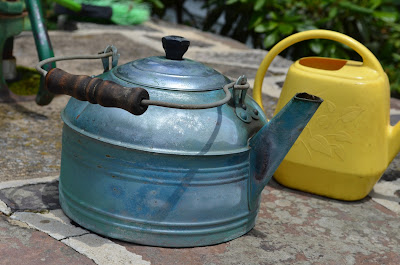 It's not old, as the bottom is marked "Revere Ware." It's obviously been around a while, though, as evidenced by the mineral deposits on the inside. But Revere Ware is pretty good stuff, so when I saw that it was copper, my mind immediately saw a beautiful gleaming tea kettle perched on the gas stove of the Guest House (instead of this ugly saucepan), making the dining/bedroom even cozier. 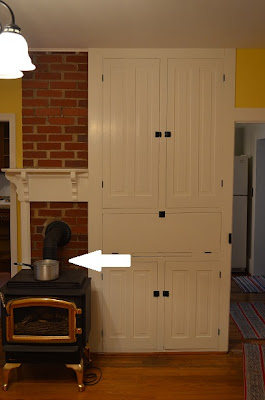 I took the kettle inside and washed it with soap and water, rinsing away several layers of dust and dirt. I got out my trusty Barkeeper's Friend cleanser (it's good stuff!) 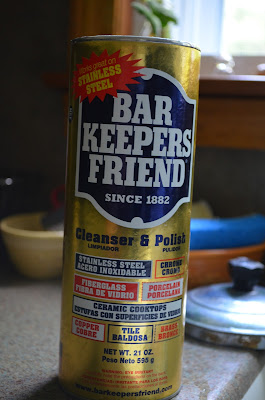 and was poised with the scrubby to begin my quest for that gleaming kettle in my mind's eye. Something stopped me, though. Voices floated through my brain from Antiques Road Show, American Pickers, and Pawn Stars about rich patinas gained over years and years of existence and how one shouldn't remove them. Uh-oh.

So here's my dilemma: to scrub or not to scrub? I love rich, gleaming copper, but this old green tint is pretty cool. I did scrub a little on the bottom (where it won't show, should I decide not to scrub) so I could see what it would look like if I did scrub. 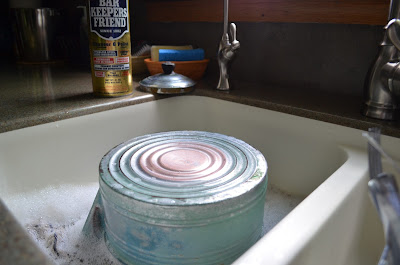 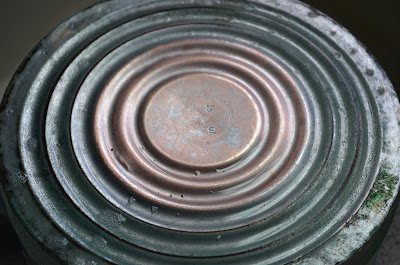 And now here I am, with a decision to make! I guess, if I scrub the entire kettle back to its copper self and don't like it, it will eventually turn green again. But that might take a long time. And, because if I do decide to scrub, it's going to take a lot of scrubbing, I don't want to use up my precious elbow grease and then wish I hadn't. So what do you think?? Should I scrub it, 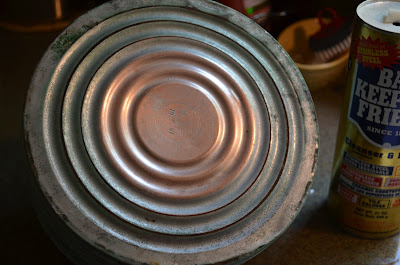 or leave it alone? 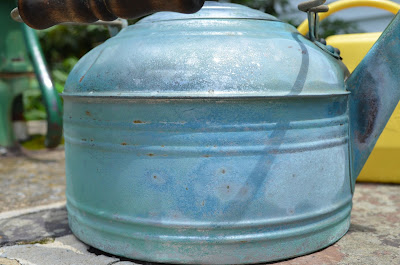 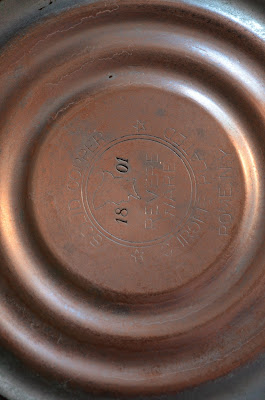 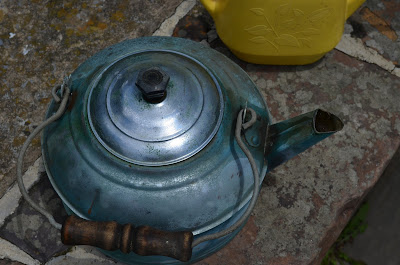 Thankfully, it's a sweet little dilemma that doesn't matter in the great scheme of things...and either way, it will be OK. But I really don't know which I like better!  Leave a comment below and tell me, "If you were me, what would you do?"
Posted by Nancy Vance at 8:40 PM 5 comments:

Email ThisBlogThis!Share to TwitterShare to FacebookShare to Pinterest
Labels: House and Home, The Guest House

At long last, I'm cleaning my screened porch for the summer season. You might be thinking I'm a bit behind in this springtime chore, but things got in the way. First, I always have to wait for the trees that surround our house (acres of them) to finish or at least nearly finish putting out pollen. If I clean the porch too soon, it just gets covered in the yellow fuzzy dust all over again and my work is in vain. The trees were late this year.

Then, I was waiting on my husband to "Jomax" the house. If you've never tried Jomax on your vinyl siding, you must. Mix it with bleach and water according to the directions and spray it on with a garden sprayer. Then wash off with a pressure washer or garden hose with good pressure. The first year we used it, our siding hadn't been cleaned since we put it on the house. Robin had to scrub some spots, especially in the back, above the screened porch. That side of the house faces the north and doesn't get much sun. Consequently it was almost black with mold. Thank goodness no one ever sees it! Jomax came to the rescue and wah-la! Our siding looked like new and the house almost glowed. Now we use Jomax every spring, and no more scrubbing is needed. Anyway, Robin didn't want to Jomax until his brother got our roof painted. So, we had to wait on brother John to get around to us, which he finally did late last week. He finished up Monday, and Robin tackled the Jomax job that same evening. 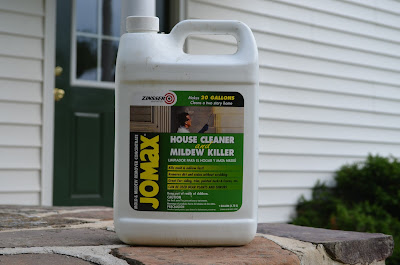 Monday was a rare sunny day here, so bright and kind of early, I started cleaning the porch in anticipation of the painting and Jomaxing being completed by evening. This year, the porch floor needs a fresh coat of water-resistant stain and my plan was to push all the furniture to one end and have the other two thirds ready for stain early Tuesday morning. I did my part and got all the cleaning done, but yesterday dawned dark and cloudy and it rained almost all day. Not a good day for applying the stain, according to the instructions on the can. So, I went to plan B for yesterday, hoping for better weather today.

I did get the stain on this morning: the temperature was perfect and a mix of clouds and sun kept the porch from getting too hot. We did have a couple of showers, but no rain blew in on my newly treated floor, thank goodness. Now I have to let it dry for 24-48 hours before I can move the furniture and clean and stain the other end, which I hope to finish up on Saturday, at the latest. 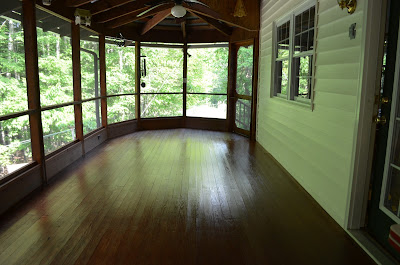 Alas, it will be Sunday at best before my lovely porch is clean and ready for summer living. I can't wait to plop down out there with a good book! We enjoy eating our meals there, too, from the time I get it clean in the spring until well into September. In fact, we usually can't wait until the porch is clean. As soon as the weather is warm enough, I clean the pollen off the table and two chairs, and sweep a path from the door to the table. We've discovered our food tastes just as good amid all the dirt! Here are some pictures the clean and furnished porch from last year. I had a "porch" post all written in my head back then, but it became another one of the many posts that never make it from my brain to the computer. 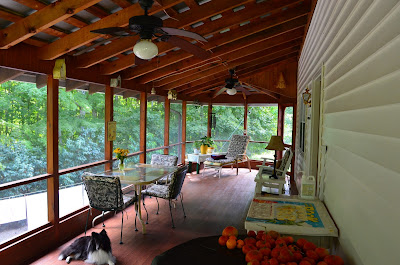 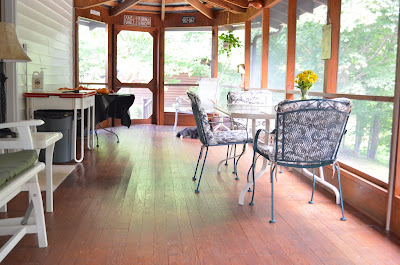 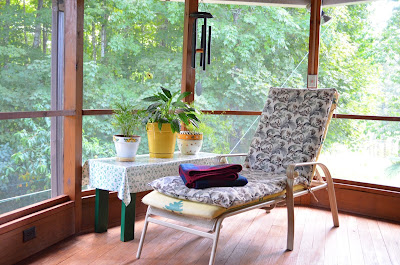 We have a nice front porch, too, but it isn't screened and it gets the hot afternoon and evening sun. It's great for flowers, but not so good for sitting unless it's really early in the morning on a day when the bugs sleep in. (Whatever it is about humans that biting insects love, I have a lot of it!) How about your house? Do you have porches? Do you sit on them? Or have you closed them in to create needed and/or more useful space? 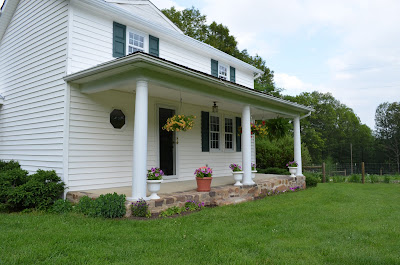 It seems that our 21st century society has lost the art of porch-sitting, by and large. Folks, myself included, have a hard time making time to relax on the porch. There are some chores that can be done there, such as shelling peas or stinging beans. But taking time to just sit and rest is hard to do in this day and time. It seems that when I was a kid, the grownups sat on the porch most summer evenings after supper, at least for a little while. They didn't park in front of the TV, but instead took a favorite seat on the porch to rest, or maybe visit with a neighbor who dropped by. I remember being one of a gang of kids playing hide-and-go-seek until it was too dark to see while the grownups worked through the cares of the day with laughter and good conversation.

I enjoy looking at houses when I'm out and about. I find I always prefer those with porches over those without them. Porches make a house cozier, acting as a buffer between the whims and chaos of the world and the familiar stability of home. Porches are places where I can have some indoor comforts while I relish in the great outdoors. Porches say, "You are welcome here! Come sit a while!" Porches are great places to share a glass of iced tea and a have a good talk. When folks leave our porch, I hope they go with a sweet memory or two that will bring a bit of comfort someday. I'm always looking for a reason to spend time on my screened porch. Now that I have a laptop and a new wireless router, maybe I can write my next blog post...on the porch! 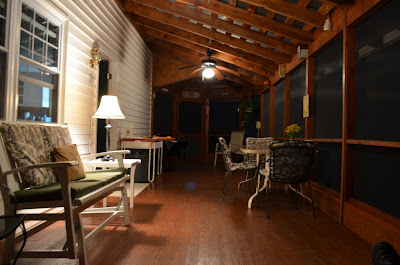 Email ThisBlogThis!Share to TwitterShare to FacebookShare to Pinterest
Labels: Family, Friends and Neighbors, House and Home, Ponder This...

Poor little Goosey is no more. What I was afraid of happened. On Monday morning, Goosey was gone. We've lost some chickens, too, so there must be some creature higher up on the food chain prowling about at night. It was sad to loose Goosey. He was growing and doing well, and so happy in his new home. I feel badly that we couldn't do a better job of protecting him. But when you have animals, you can expect to have some disappointing bumps in the road. Even though it hurts to loose our animal friends - sometimes it really hurts - you don't have to look far to find folks who are hurting much worse. So, I'm thankful we got to enjoy Goosey for a few weeks, watching him grow and change. He was a sweet ray of sunshine for a little while. 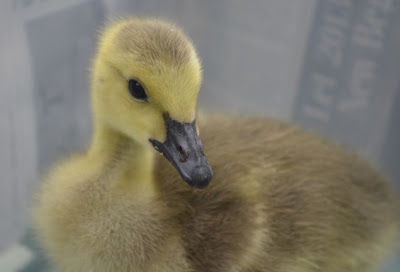