How Can I Keep From Singing?

I went to choir practice last night. I haven't done that in a very long time. Long ago, before the age of waning energy, elder care, and to-do list overload, I sang in the church choir. I even directed it for a few years. A really long time ago when I was young, I sang with a ceili band and we even made a record. But since the turn of the century, I haven't done much singing, with or without a choir or ceili band. Singing got pushed to the outer reaches of my life, where it has been wasting away for too long.

Folks are so kind - and persistent. They keep asking me to sing with the choir at church, if only for the annual Christmas cantata. They keep asking me to sing a solo for Sunday worship whenever I'd like to. And I would like to, but that same old challenge of making room in a busy schedule for practices has gotten the best of me. Sadly, I've let singing slip away, and it's almost beyond my grasp now. You see, a singing voice is one of those things that, if not used often, will eventually be lost. I haven't lost my voice completely yet, but I have lost some range and control. Only a lot of practice and effort will bring it back.

In the past couple of years, I've been working at getting my voice back. I sing while I'm driving. I sing or hum along with the radio while I paint at the farmhouse. But nothing replaces the exercise and discipline of singing with a choir, with regular practice being one of the best benefits. In addition to the vocal workout, the camaraderie of a choir is good for my soul, nourishing that part of me that longs to belong.

And so, I made time for Christmas cantata practice last evening. The music was a little overwhelming in places, and when the ladies' notes were too high I dropped down to sing with the men. But it felt good to be there, to sing with a group, to be a part of the choir again. It will still be a challenge to get to rehearsals - I probably won't make them all - and I hope no elder care emergencies interfere with the Sunday morning performance. But Christmas is coming and music has always been a gloriously necessary part of the season for me. What sweeter way to celebrate my Saviour's birth than to sing!!
Posted by Nancy Vance at 8:02 PM 1 comment:

Email ThisBlogThis!Share to TwitterShare to FacebookShare to Pinterest
Labels: Holidays and Seasons, Music and Dance

At the risk of being called a copycat (which I hate), I'm going to try my hand at recipe posting/food photography. It seems that sharing great recipes through blogging is a popular thing to do these days. Ree Drummond, a.k.a. The Pioneer Woman, has it down pat, complete with stunning photos of every step in preparing a delicious dish. Check out her blog/website at http://www.thepioneerwoman.com/, and click on the cooking tab to see what I mean.
I'm not a newbie when it comes to photography, although there's always a lot to learn. But still, taking nice pictures of ingredients sitting still on the counter top can't be too hard, can it? Well, let's just say that over two hours and 200 photos later (thank goodness for digital cameras), I have a healthy respect for food photography! I'd even venture to say that food photography is an art and science unto itself, requiring great knowledge, skill, and creativity, not to mention a good dose of luck.
I chose my mother's Apple Crisp recipe for my first food photo shoot. It's a simple recipe, with only seven ingredients, and is quick and easy to prepare. Even so, it took Robin and me about two hours to get it in the oven, what with posing and snapping photo after photo, and checking to see if they were sharp and clearly focused, most of which were not. In the real estate business, they say location, location, location is the secret to a successful sale. This evening I learned that in food photography, the secret is light, light, light. Light is everything, and if the light isn't right, the photo won't be right either. I also learned it is helpful to have at least four hands when shooting food photos. Thanks, Robin!
So here goes:

Whew! Bake at 350 degrees for 45 minutes, until lightly browned. I tried getting shots of the oven setting, but they came out really blurry, as did the ones of the dish inside the oven. I'll work on that, but not tonight! I realized I hadn't added the salt right after I put the dish in the oven, so I scratched around in the topping and sprinkled it in. While it baked I started writing this post and uploading photos. By the time the crisp came out of the oven, I was about whipped, but here are the final photos: 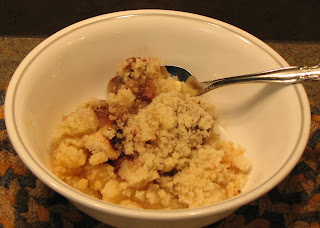 So...four hours after I started, I'm almost done with my first food photo shoot. Getting all these photos on this post was no small feat either, and I'm ready for bed. But in case you don't care about the photography, here's the recipe for my mom's yummy Apple Crisp. It doesn't have oatmeal, and I think that's why I like it so much. Take my advice: don't try to photograph it, just make it and eat it!!  It'll sweeten your day. Enjoy!

Stir flour and sugar together in mixing bowl. Add butter and mix by hand until crumbly and fine. Set aside. Arrange apples in ungreased 2 qt. baking dish. Sprinkle with water, then sprinkle on cinnamon and salt. Sprinkle topping over apples evenly, covering completely. Bake at 350 degrees for 45 minutes. Serve warm or at room temperature, with ice cream if desired.
Posted by Nancy Vance at 10:49 PM No comments: