Today was my Sunday to spend with my dad. It's a ritual I've observed for a while now. Robin and I are in the season of elder care, and Sundays with Dad are important. He's 91, and since Mom died, his days get long and lonely sometimes.

Until I was 10 or so, my grandparents lived about an hour away. We went to see them every third Sunday, leaving Sunday School early and arriving in time for an old-fashioned and delicious Sunday dinner. Back then I got carsick easily, especially since, being the youngest and smallest, I had to sit in the middle in the back seat. Our route took us across two mountains and I got sick on the same turn every time. Mom would say, "Bill, you better slow down! She's turning green...she's going to be sick!" And sure enough, we'd be parked beside the road while I got my stomach in order and inhaled the fresh air with my feet on solid ground. By the time we got to Grandmother and Granddaddy's, I was ready to put something good into my very empty tummy. Once the dishes were done, the afternoon hours were spent mostly listening to the grownups talk. By 3:00 or 4:00 we were on our way home. Sometimes we stopped at the Dairy Queen for ice cream, which was a special treat. Hmmm...I don't ever remember getting sick on the way home. Go figure.

Now it's my dad who's the old one, and I'm the grownup visiting every third Sunday. It's a two-hour drive to his house, so I leave in time to meet him at church. After the service is over we have lunch at the Kalico Kitchen, where all the locals who don't want to cook go after church. On rare occasions I take lunch, but I didn't get the covered dish gene. I enjoy cooking and I'm not bad, but coming up with good food that travels well just isn't in my bag of tricks. Sometimes my sister feeds all of us (she got the Sunday dinner gene) with wonderful meals. She likes to try new recipes. I always thought she had some secret for picking out really good ones until I said so one day. Her son immediately responded with, "You're not here for all the yucky ones!" 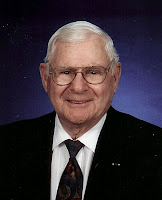 After lunch, the afternoon hours are still spent in conversation, only now I'm one of the grownups doing the talking. When it's just Dad and me, we catch up on the news since my last visit and most always come around to some family history. When 4:00 rolls around, it's time for me to head home. Then comes the hardest part of the day: leaving. As much as I need to get home to my own life, leaving him there, old and by himself, is a heart-wrenching experience. Thankfully though, he's not alone all the time. My sister and her husband are the best and do so very much for him. He has a lot of good friends and neighbors who look out for him, too. It's just that moment of driving away, with Dad waving at the window. It gets me every time. I'm glad I don't get carsick anymore, but being heartsick is just as miserable.

Living a hundred miles away was good when my parents were younger. The distance was far enough away, but not too far, for all of us to live our lives and still visit easily. Now, though, a hundred miles seems like a thousand. This season of elder care is tough and tender all at the same time. I hope I'm being the daughter I should be. I just know I sleep a little sweeter after my Sundays with Dad.
Posted by Nancy Vance at 9:12 PM No comments:

Email ThisBlogThis!Share to TwitterShare to FacebookShare to Pinterest
Labels: Family

Me and My Paintbrush

"Necessity is the mother of invention," they say. I say, "Necessity is the mother of learning how." It has become necessary in my adult life to learn how to paint. Not beautiful landscapes or stunning portraits, but walls, ceilings, woodwork, and shelves. Lots of them. I've spent an inordinate amount of time this summer with a paintbrush in my hand and a crick in my neck. 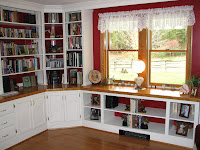 My first big adventure into painting was in 2003 when we remodeled the four rooms in the original part of our house. As a way of saving a few dollars, I painted the walls in a bedroom, sewing room, bathroom, office/library, and entry hall. Now I know that painting new drywall is fairly easy, but when I started it seemed a huge undertaking. The biggest learning curve came with the hunter green in the bathroom and the rich red in the office/library. Those colors taught me the value of tinted primer and multiple coats of paint. When I applied the primer and first coat of red paint, my husband took one look at the hot pink and said, "Are you sure that's what you want?" I have to admit I was a little worried, but I put on my brave face and said it would look fine when the room was finished. Thank goodness I was right!! But it took four coats of red to reach the color that was on the paint card and the addition of white built-in book shelves to tone the room down enough to keep it from feeling like the inside of a fire hydrant. The book shelves were no picnic either.  Besides painting the built-in cabinets, there were 39 shelves, nine drawers, and four cabinet doors. All needed primer and two coats of paint. That year I painted something every day from February to June. I learned a lot, with the most valuable lesson being that one cannot judge a paint job until it is completely dry.


Now we've undertaken another house to remodel. Robin's uncle's farmhouse became ours in the fall of 2004. Although it is in good shape, it has suffered from a severe lack of TLC for the last half-century. We're finally to the finishing point for the kitchen, pantry, dining room, bath, and laundry. (The rest of the house might take another half-century to finish!) My main summer project this year was to paint the kitchen, pantry, and dining room. Surely I could get that done over the summer... couldn't I? I started in the kitchen, where it was my bright idea to leave the wide-board walls and exposed ceiling and simply paint. Well, there's been nothing simple about it, and after six weeks of painting, I'm still at it. Those wide-board walls required hours of sanding, filling cracks and holes, priming and painting - I'm on the painting part now. But the walls pale in comparison to the ceiling. When I asked about filling the numerous cracks there, Robin said, "Are you kidding? You wanted character, didn't you?" By the time I finished painting the ceiling, I'd had about all the character I could take for one summer. I spent the better part of two weeks perched on a ladder, looking up, and moving dime store reading glasses from my head to my eyes to the end of my nose and back again in an effort to get my middle-aged eyes to focus clearly on what I was doing. Not to mention that the heatwave of the century turned our cool mountain clime into an sweltering oven, which mind you, was even hotter at the top of that ladder. And I had to paint that character-filled ceiling three times (primer plus two coats of semi-gloss), with each coat taking three or four days. I won't go into the color, and how it looked yellow instead of green, which meant I had to start over...

The ceiling is done now, and a friend stopped by today while I was working on the walls once again, and wonder of wonders, she looked up and said, "Wow, I love that ceiling!" I could have hugged her! Who knows when I'll get to the dining room and pantry (which, by the way, are easy for an old pro like me: new drywall and beadboard), but for my tired eyes, sore neck, and aching shoulder, that one sentence is about as sweet as it gets. "Wow, I love that ceiling!"
Posted by Nancy Vance at 10:51 PM 1 comment: