A few weeks ago I showed you around the Guest House. It's knee-deep in renovations and the mess continues to get worse before it will get better. But better it will be - a lot better! - by mid-summer, we hope.

When we started this second phase of work on the house, we planned to do only two rooms. But it soon became evident that while we were at it, we might as well go ahead and finish the entire house. Since the price of building materials continues to rise, doing the work now will be a little cheaper in the long run. And then there's the mess! Once I saw how much dirt and debris came from gutting only two rooms, it seemed wise to go ahead and gut everything and be done with all that demolition/construction dirt once and for all.

So, although the already-completed part of the house remains clean and usable (we had guests just this week), the rest of the house is definitely a construction zone. If you visit this week, bring your hard hat!

In case you missed the "story so far," or would like to refresh your memory, take a look at these posts:

Three Inches At a Time

In Grandfather's Room, the dry wall is up and almost ready for wallpaper. There's still some trim work to do on the bead board before it's ready for paint. Now that the room is fully insulated, the propane stove is keeping it warm and cozy. 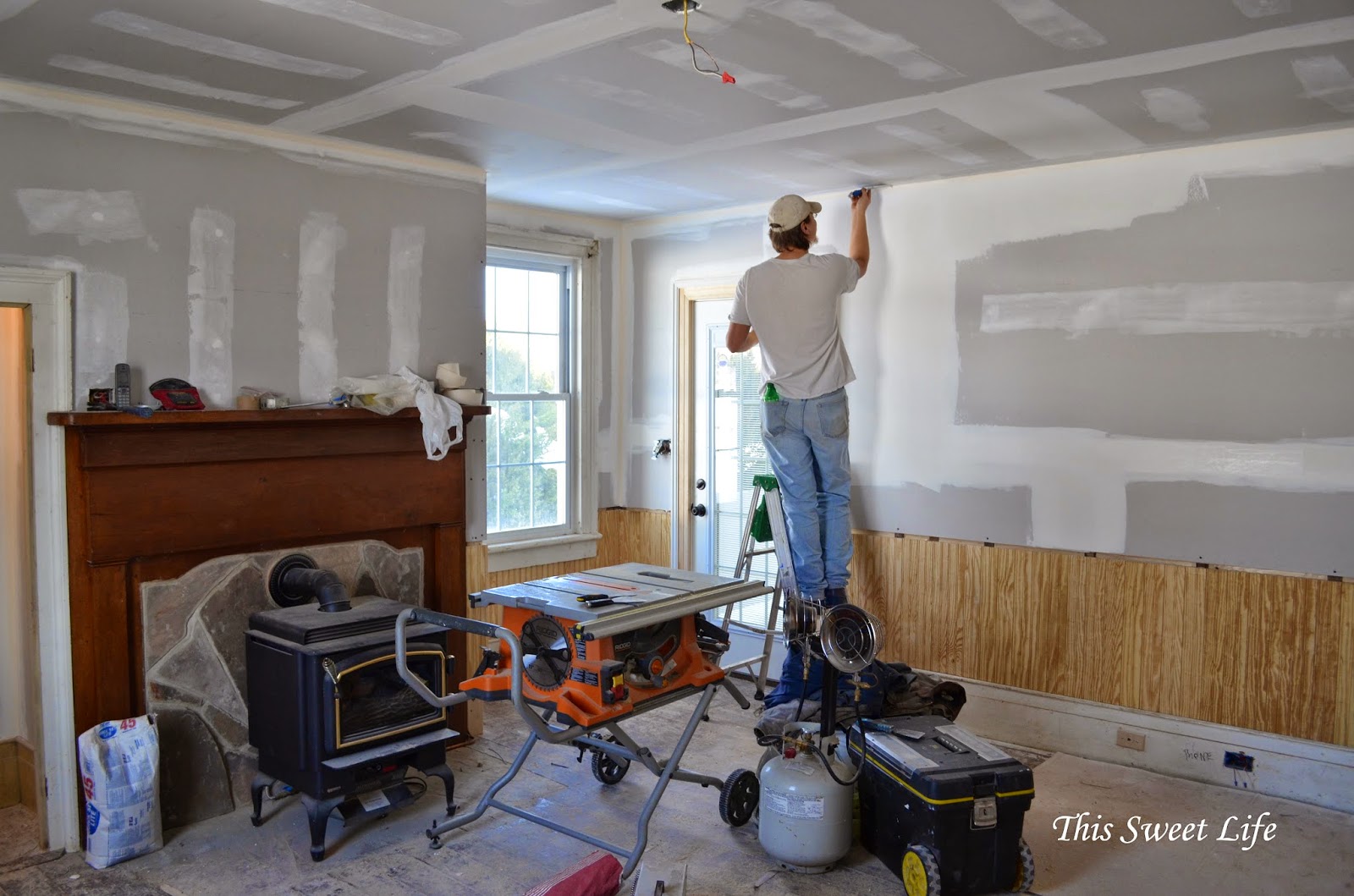 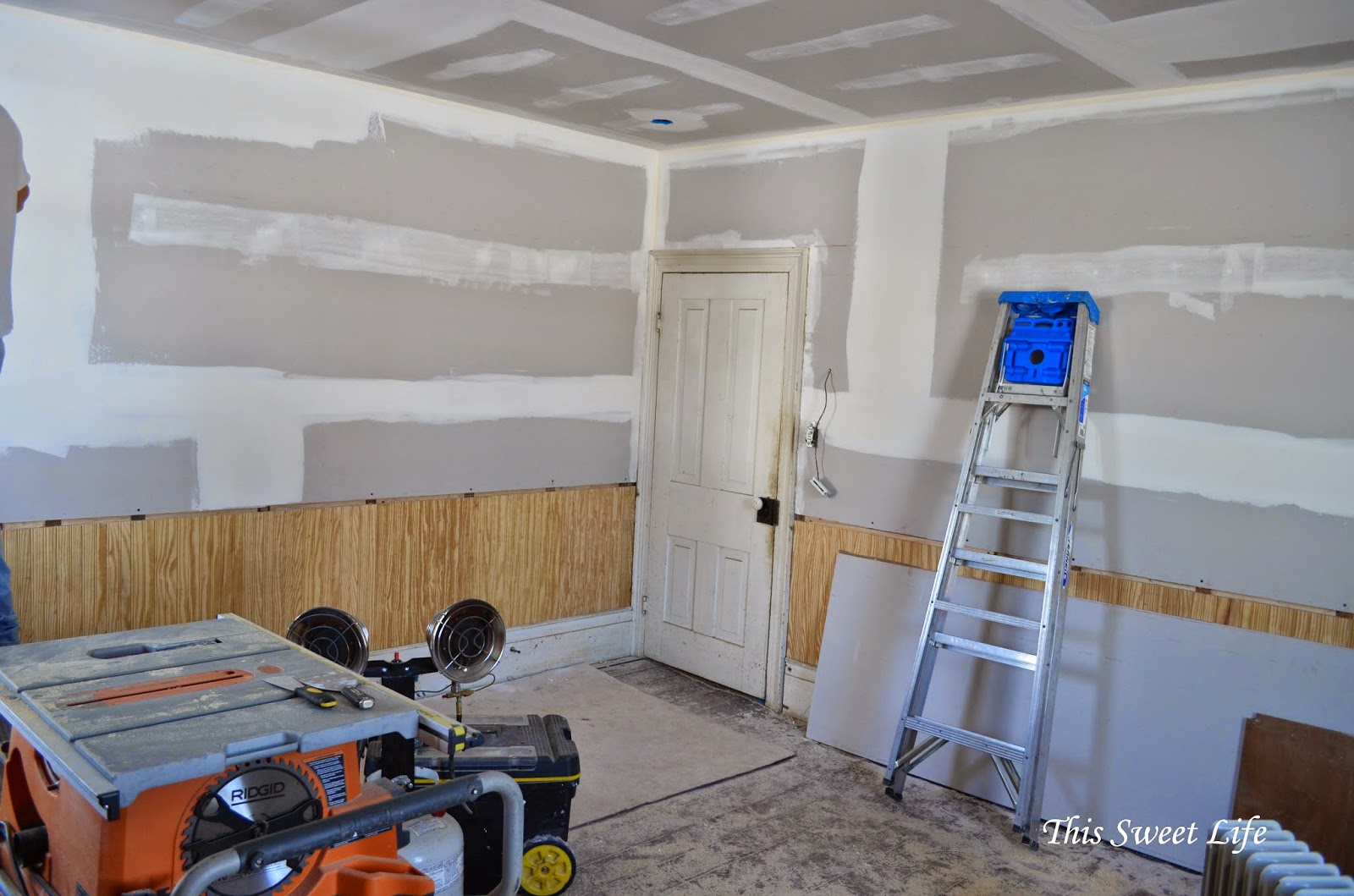 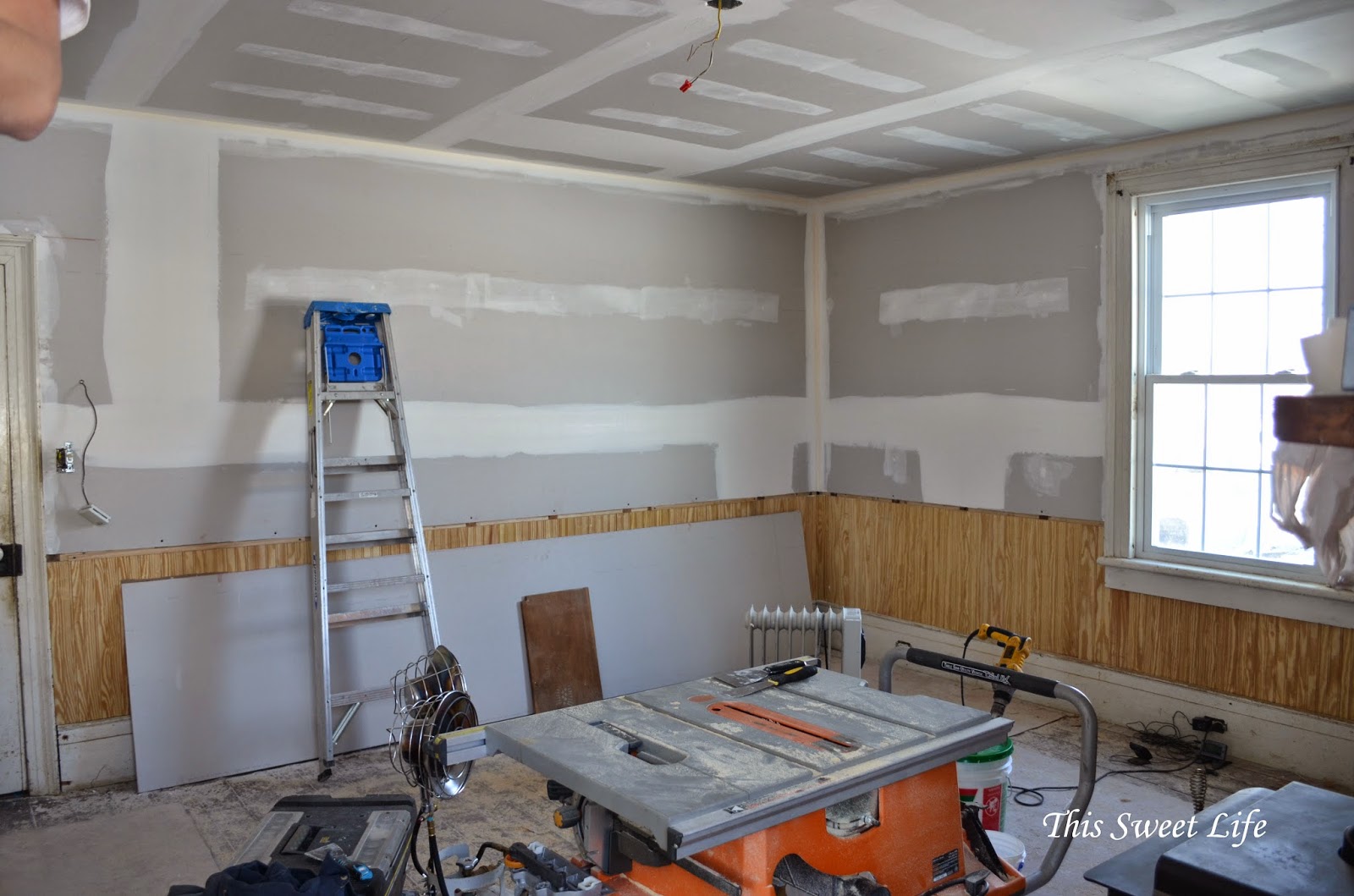 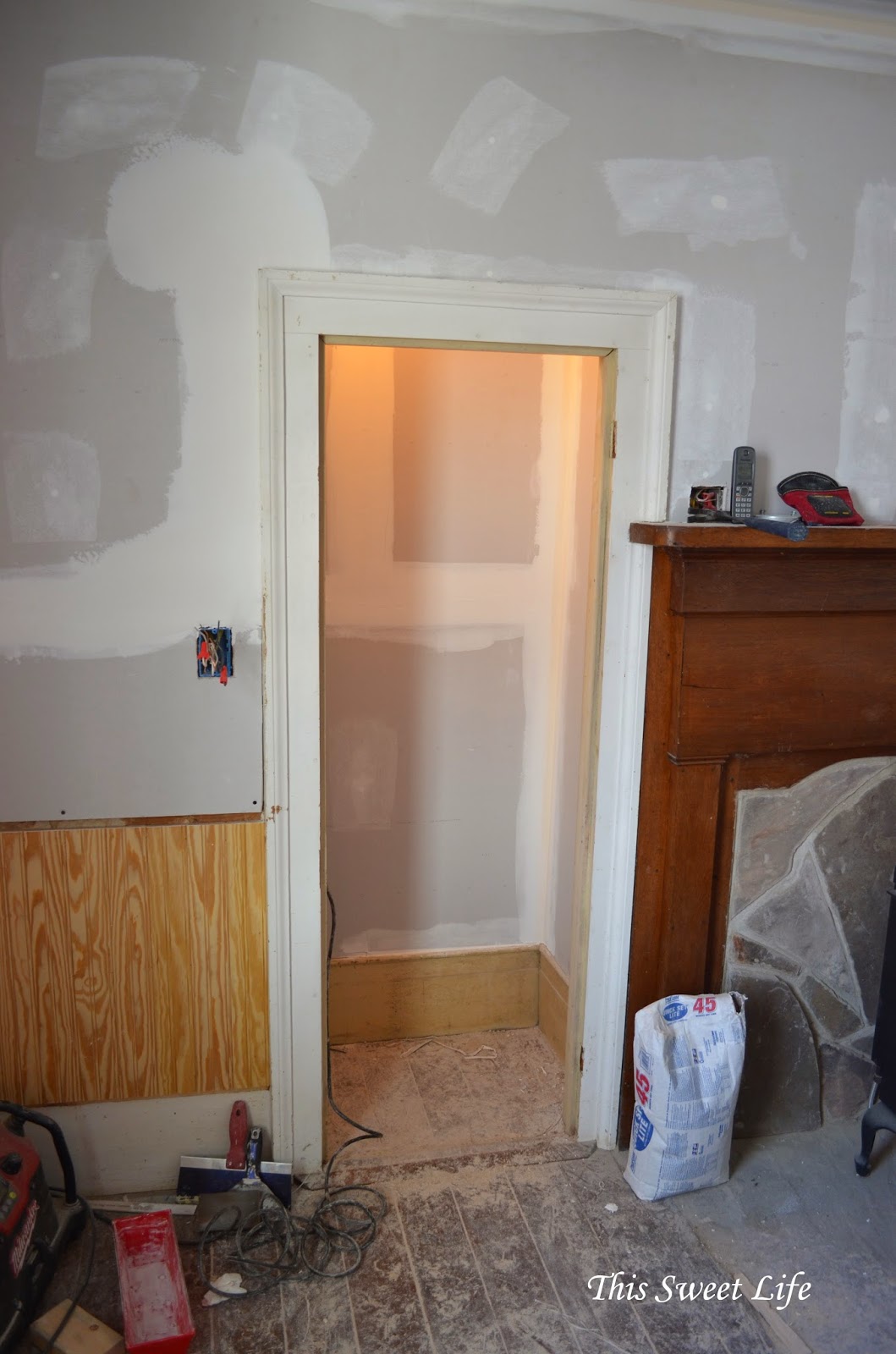 Upstairs, we started with that tiny back room, the smaller of two rooms Robin calls "Aunt Helen's Rooms." I had hoped to keep the original board walls, but the boards were pretty flimsy and would not have survived the process of being taken down and put back. And then there was that turquoise green paint! Consequently, we decided to put up new board walls. Here are some before and after photos. Remember, everything will eventually be painted (in a more pleasing color!), making it look more like the original than it does now. 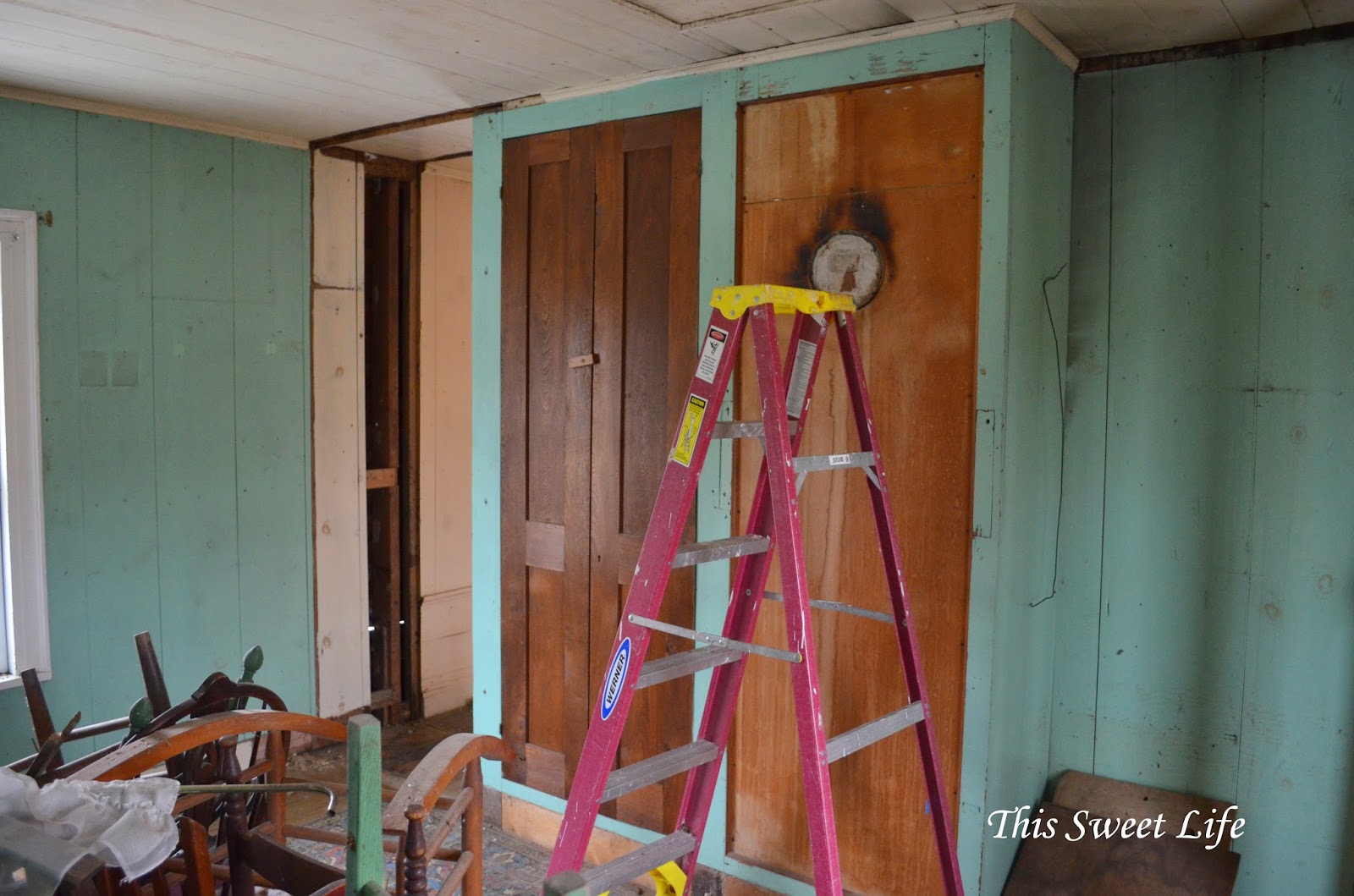 and after. We built a new closet and added what will be open shelves. 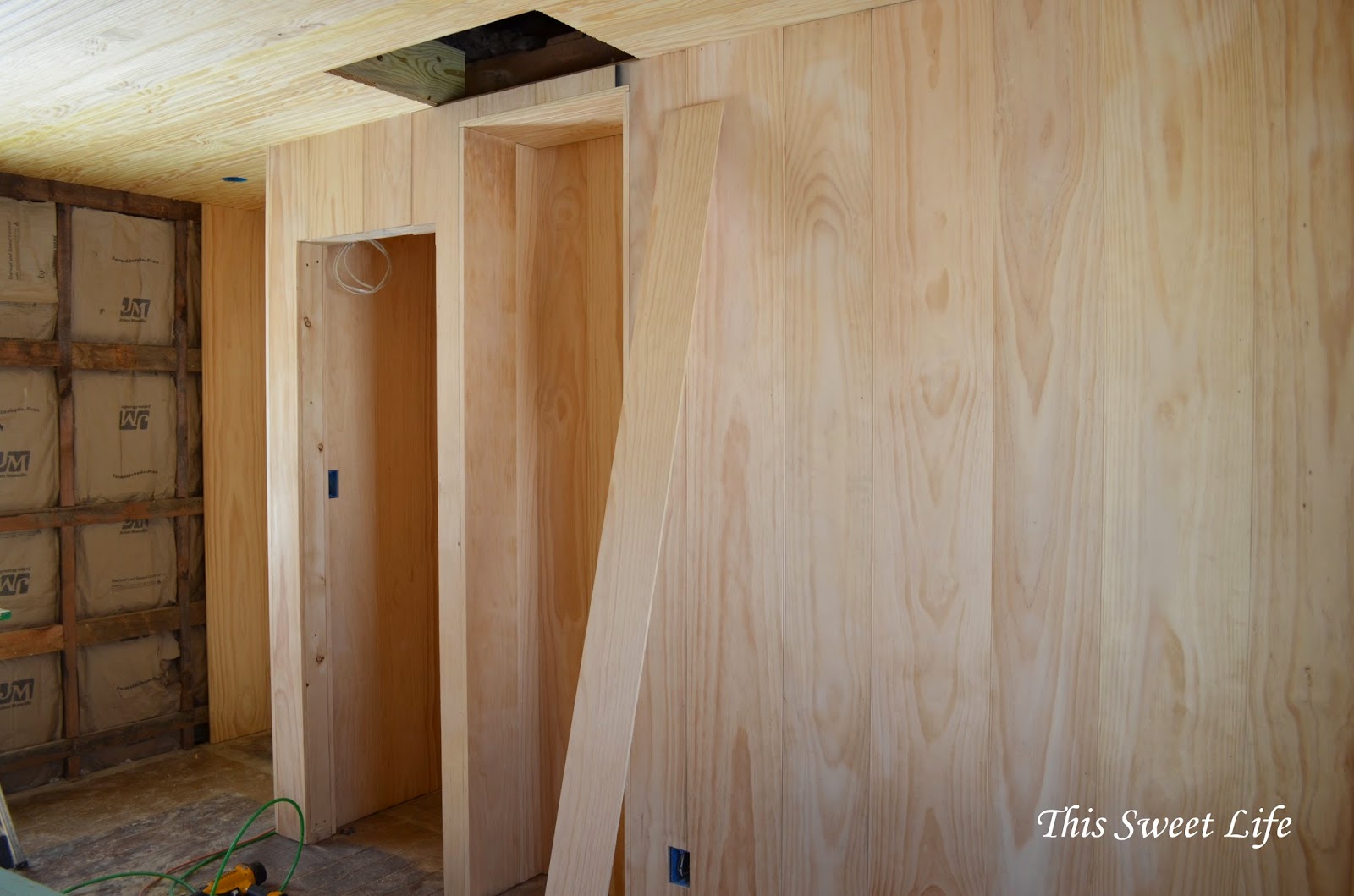 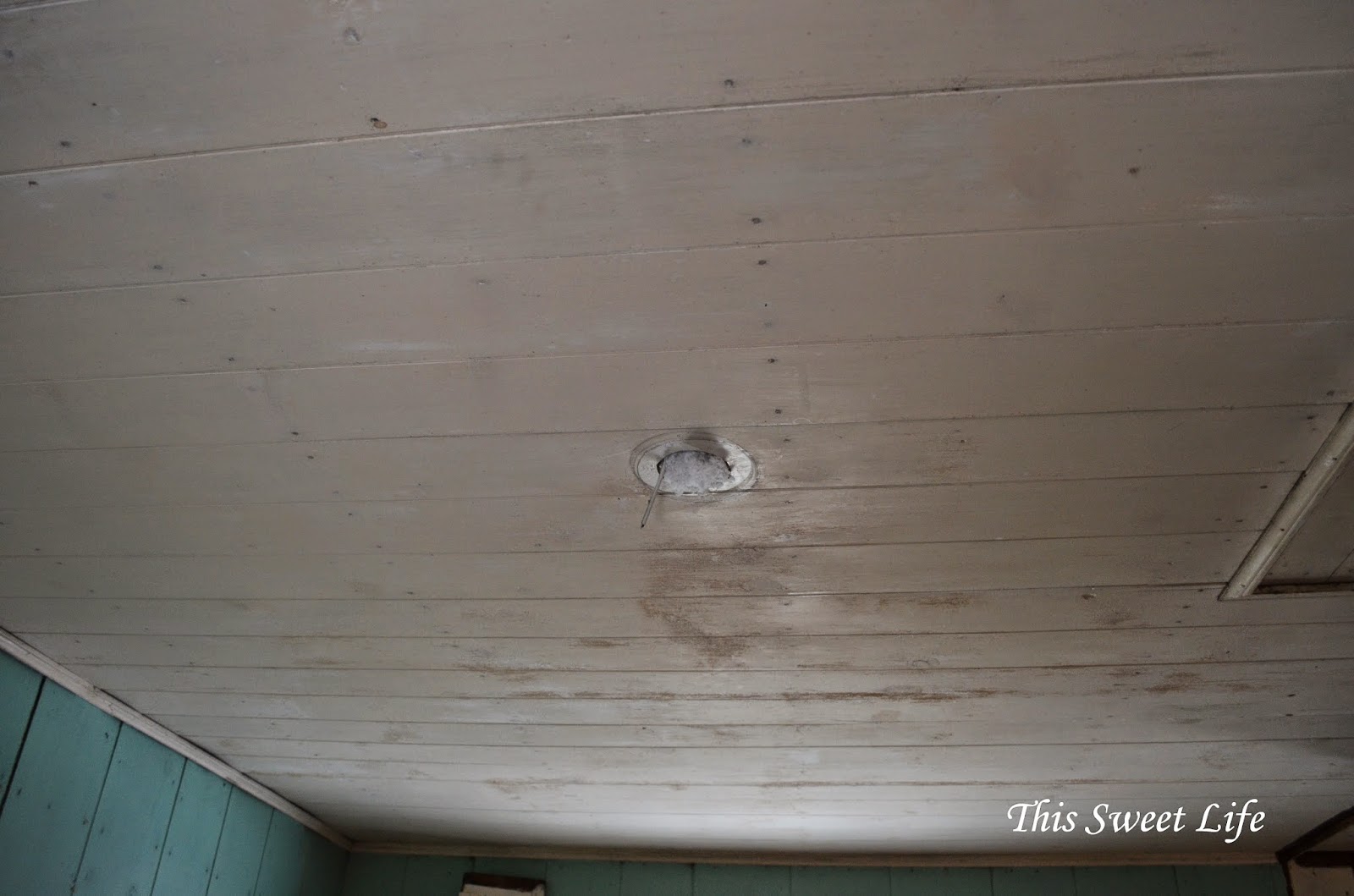 and after new bead board that will be painted white. 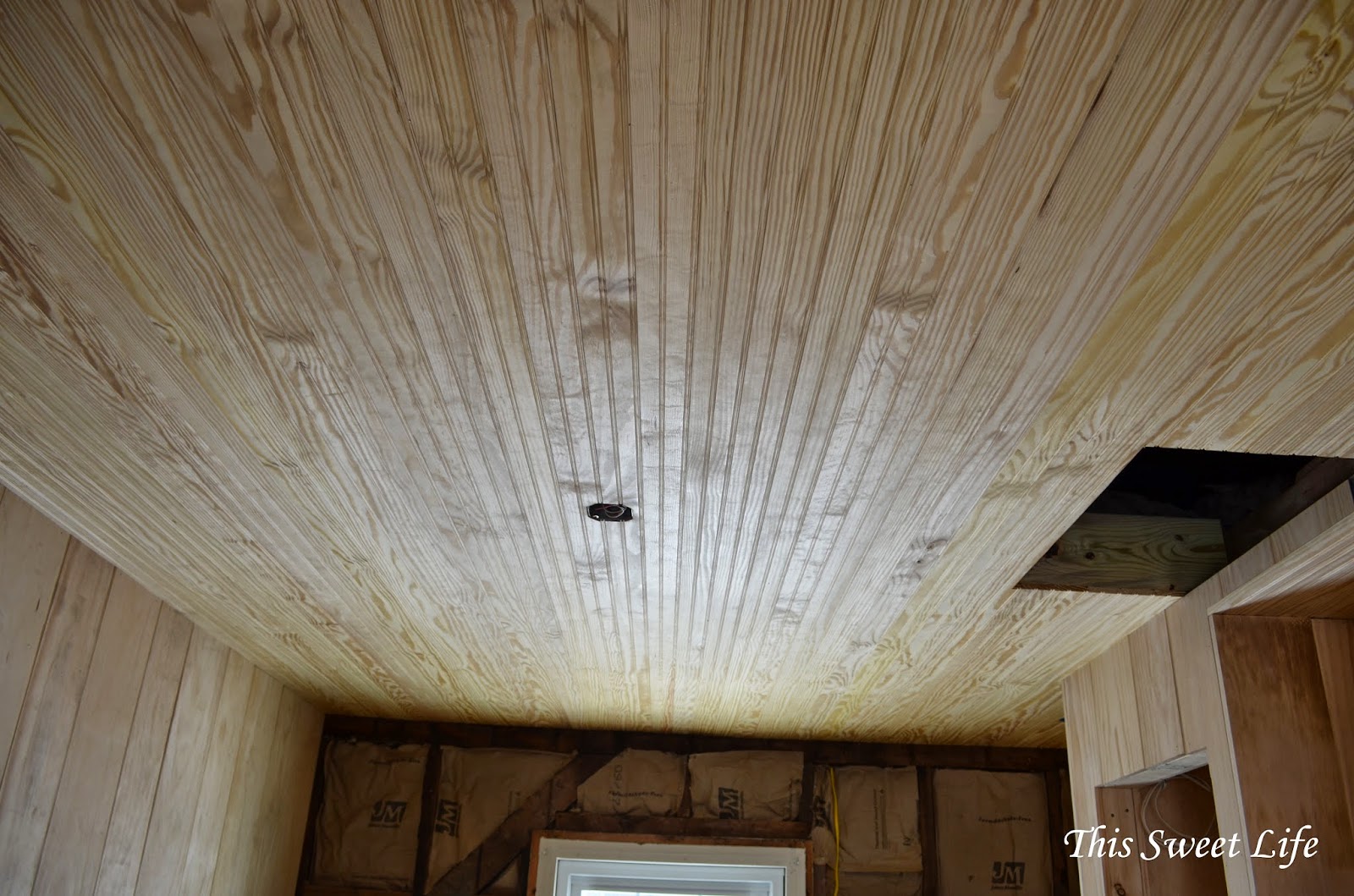 The larger of Aunt Helen's rooms is becoming two new spaces. We needed to add a bathroom upstairs and this room turned out to be the only place that could happen. However, the room was too big for just a bathroom, and we needed access to that tiny back room without having to pass through another room. The answer was to use part of the room for the bathroom and the rest for a hallway. Watch for a post on that whole process soon!

Elsewhere upstairs, there's a big bedroom known as Lohr's Room. Thank goodness it was empty! All the plaster has been removed, some repair work done on rafters and such, wiring completed, and new insulation added. It's ready for drywall now. 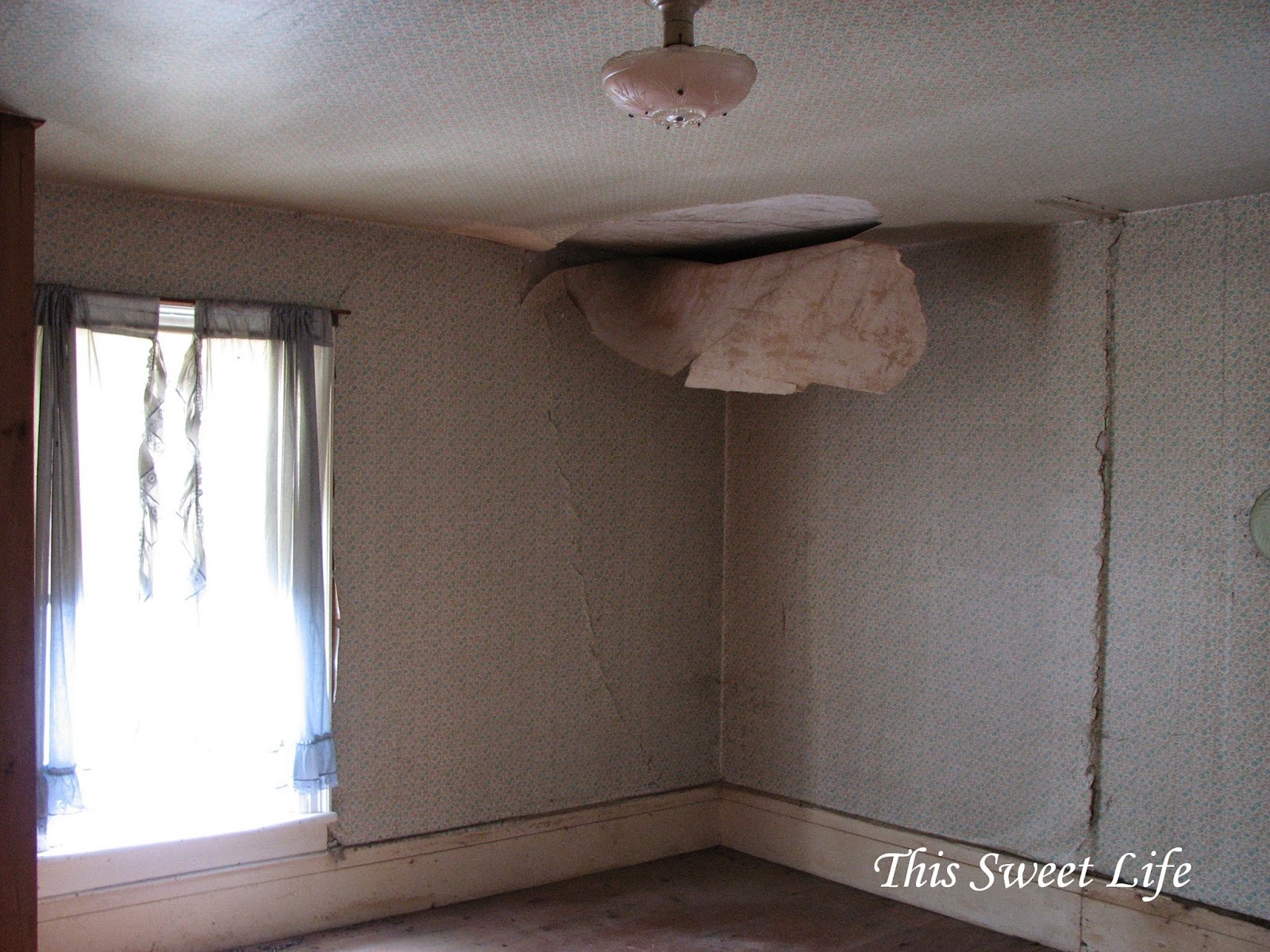 and during the demolition. 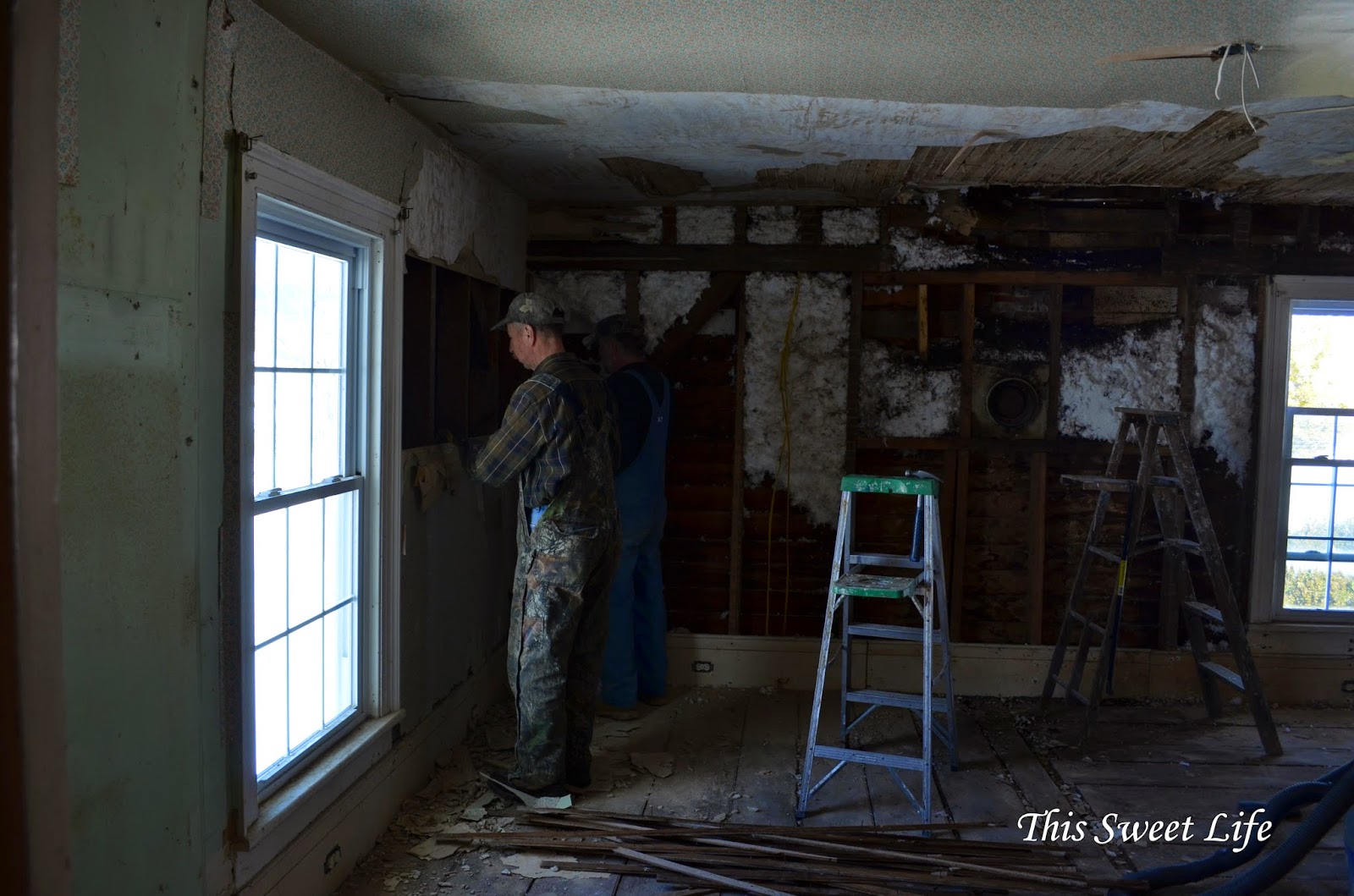 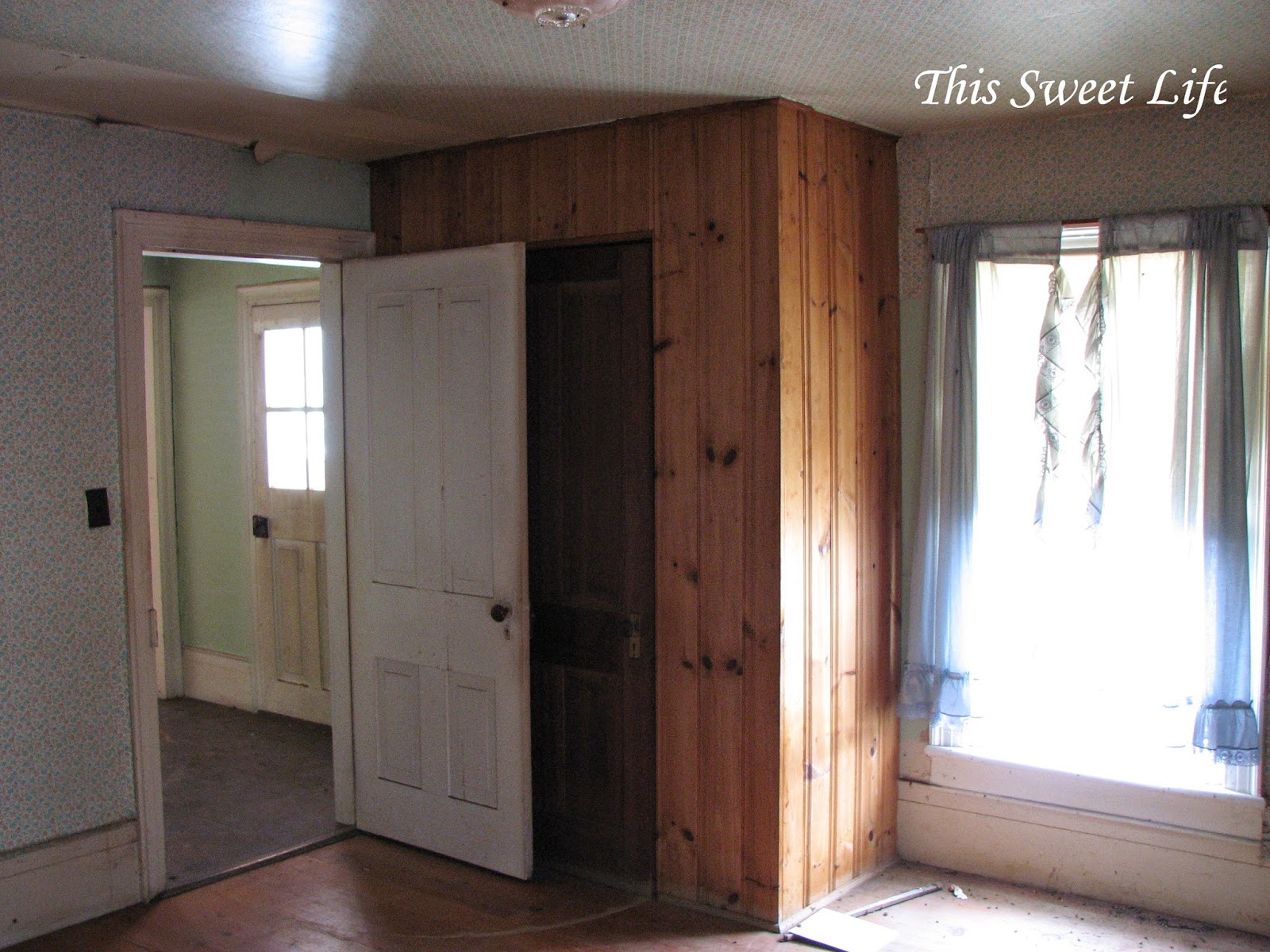 and now. We took out the closet, which had been added many years after the house was built. 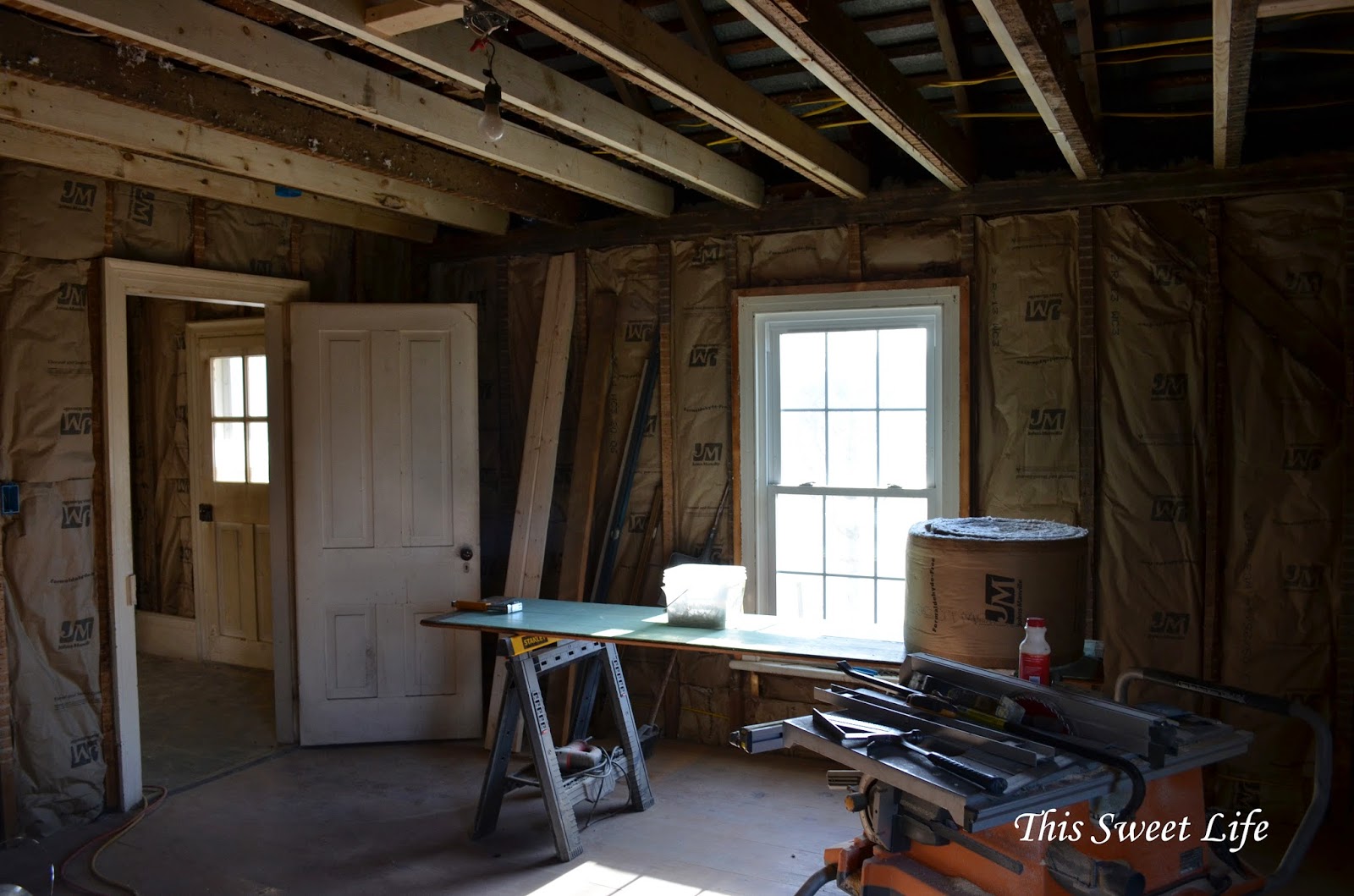 The main hallway of the house, which is open to both floors, has a beautiful staircase and banister. Here are some photos taken when we the house became ours in 2004. 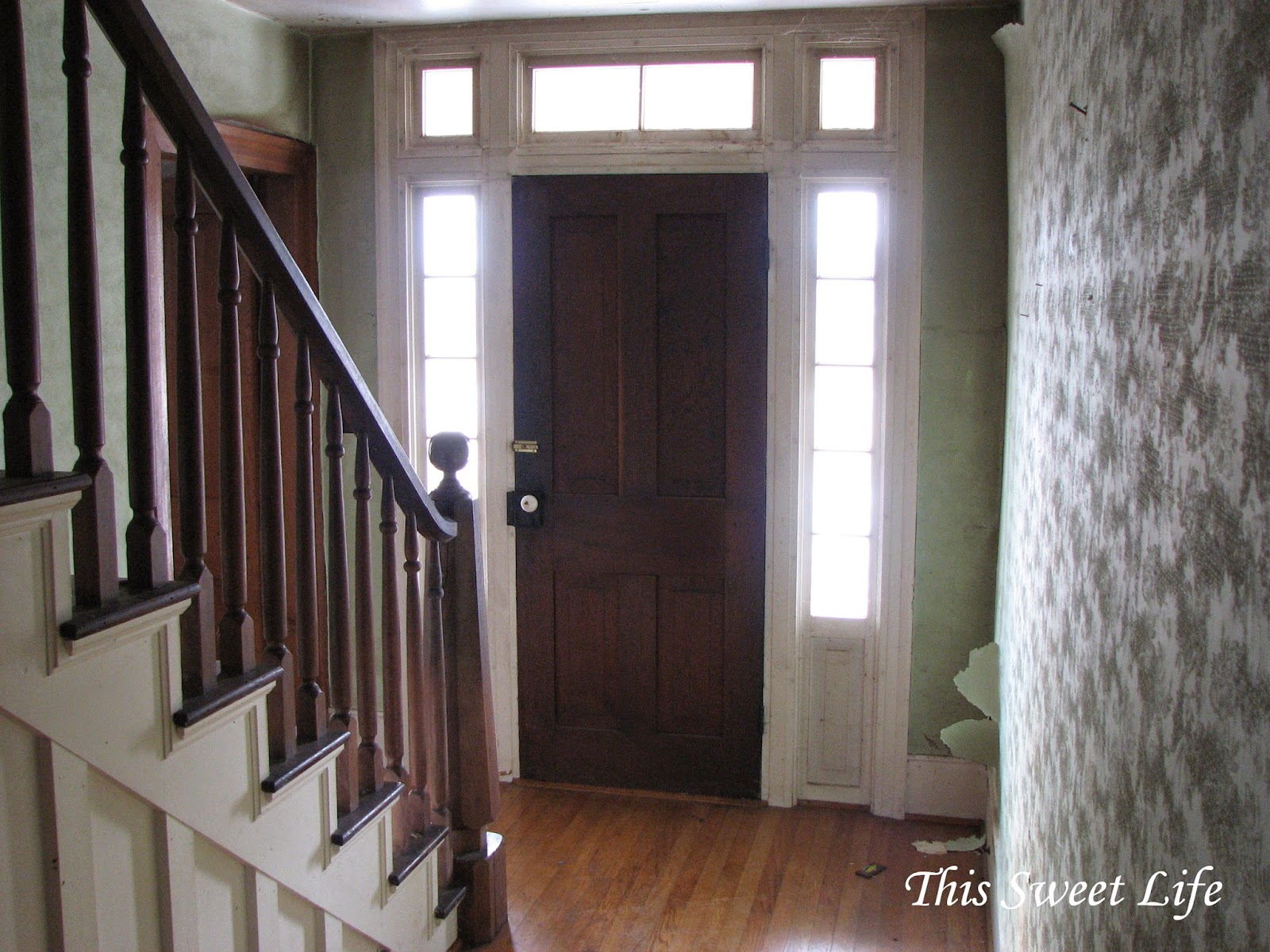 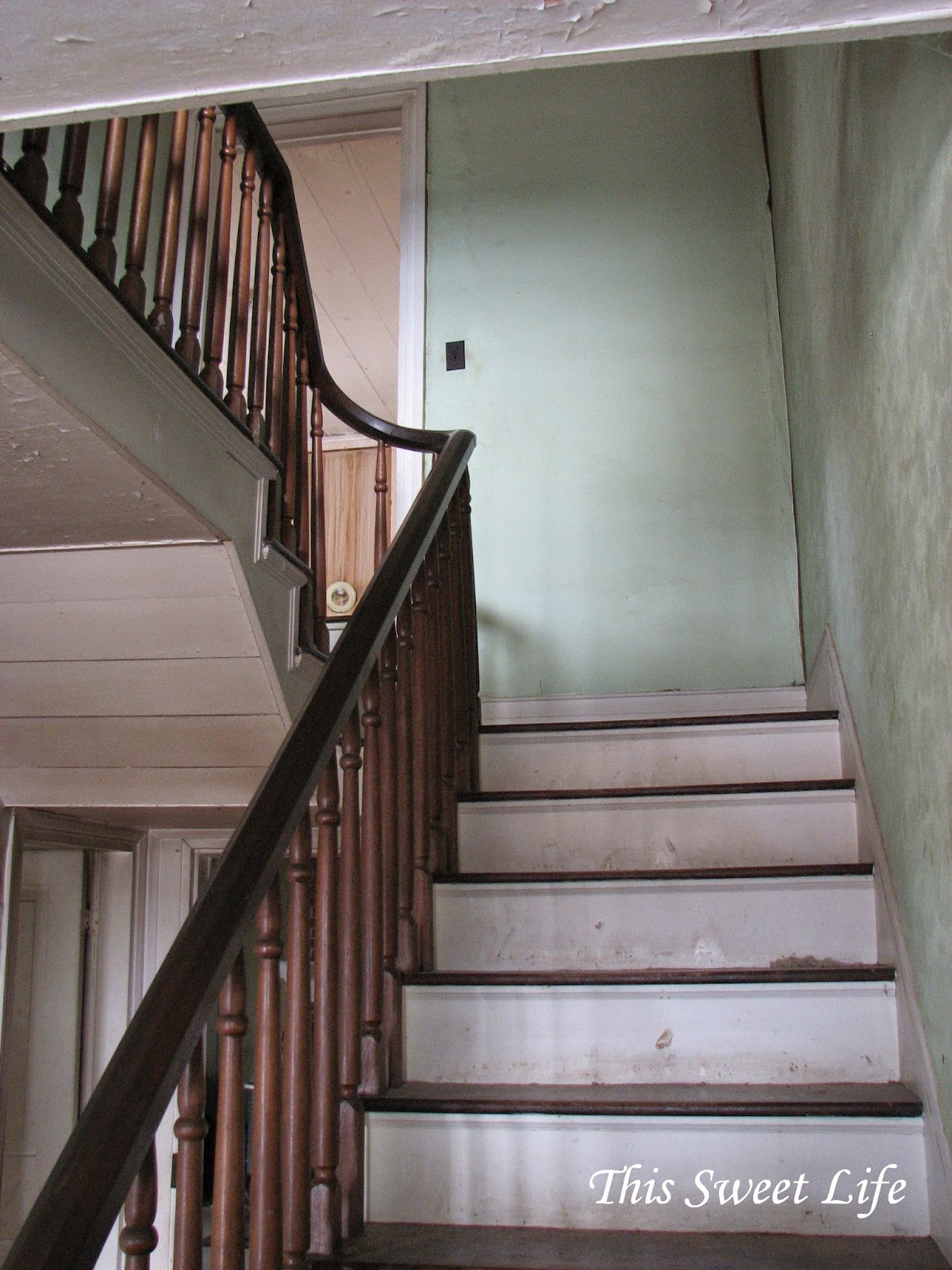 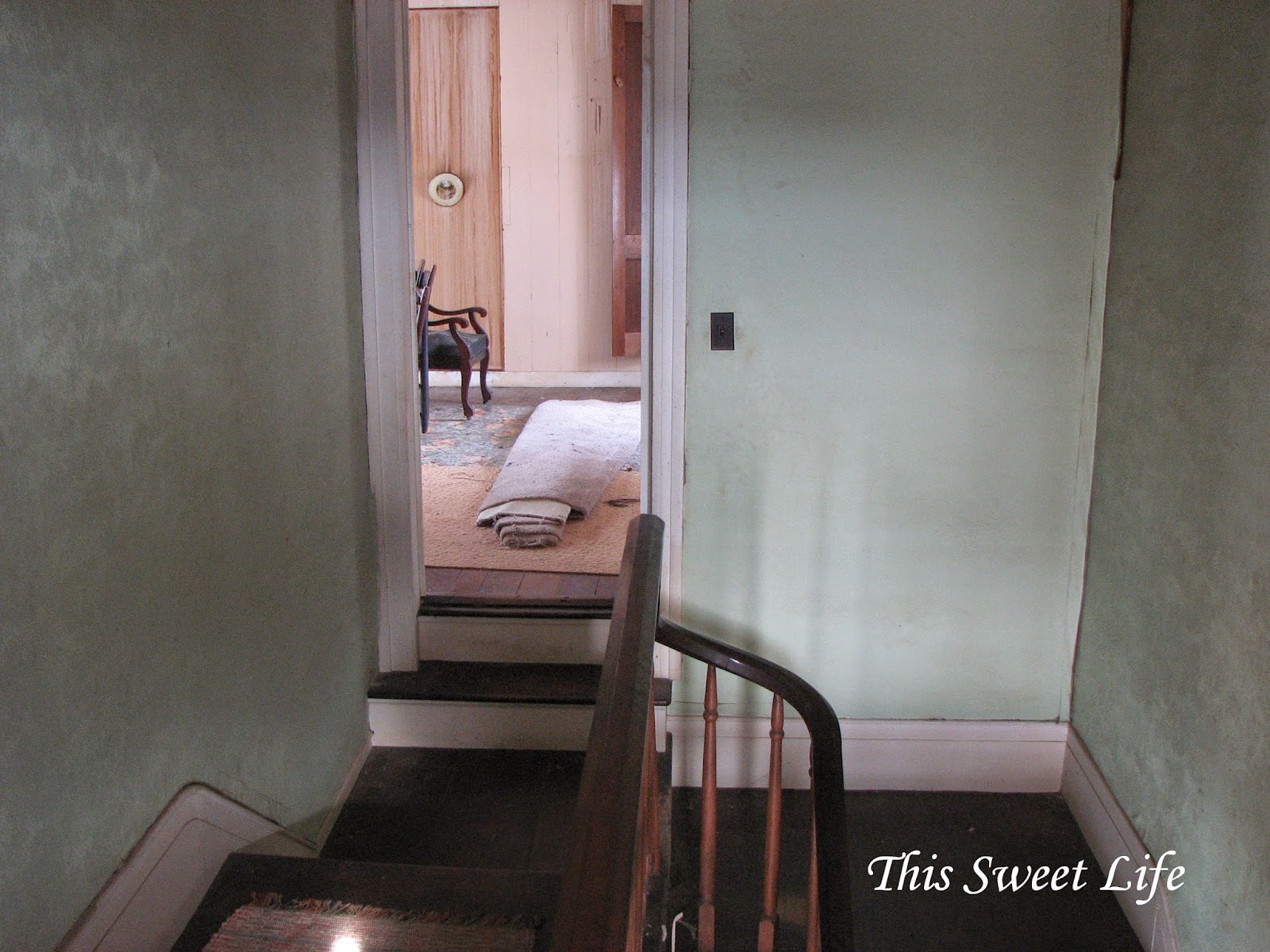 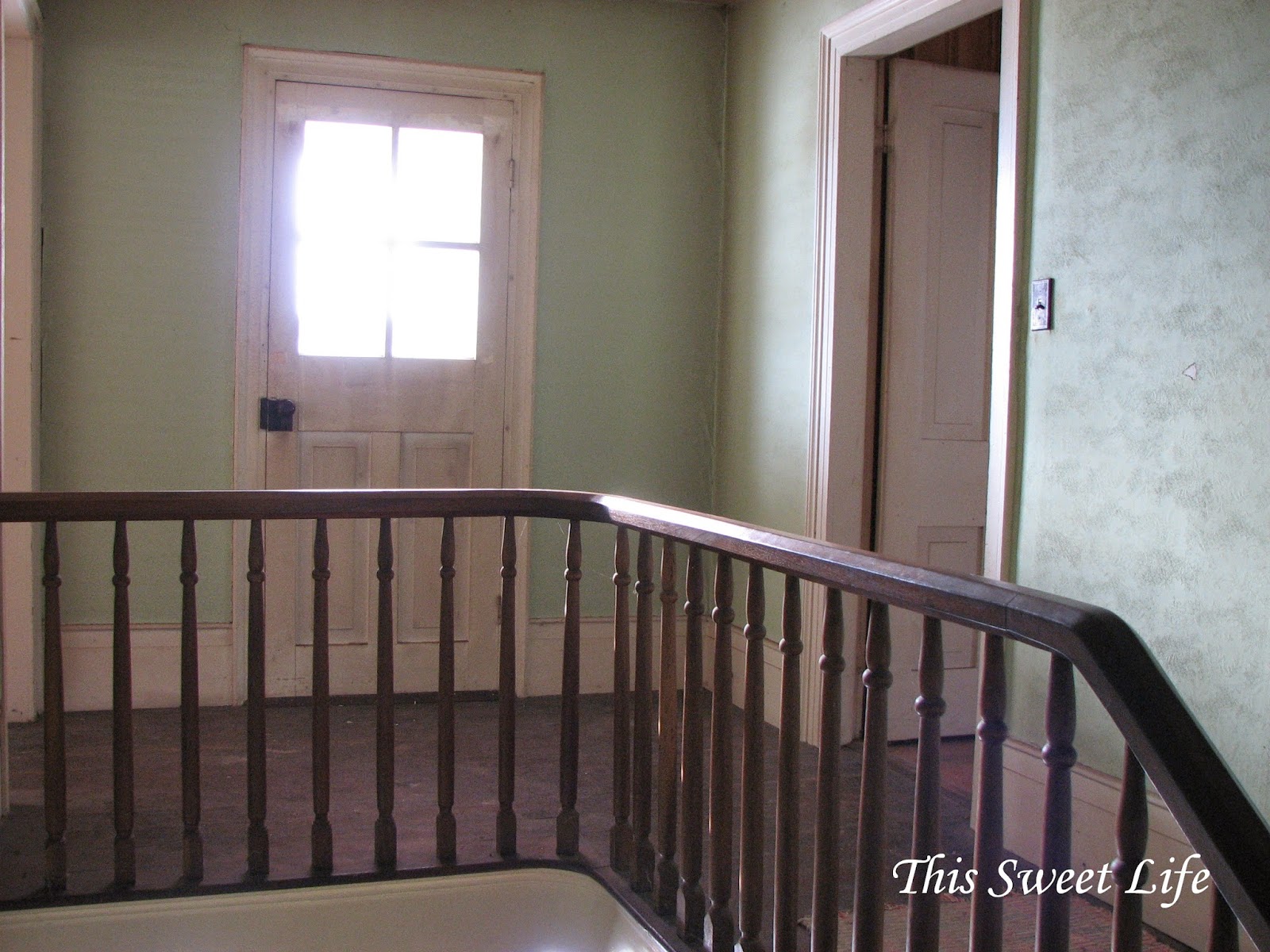 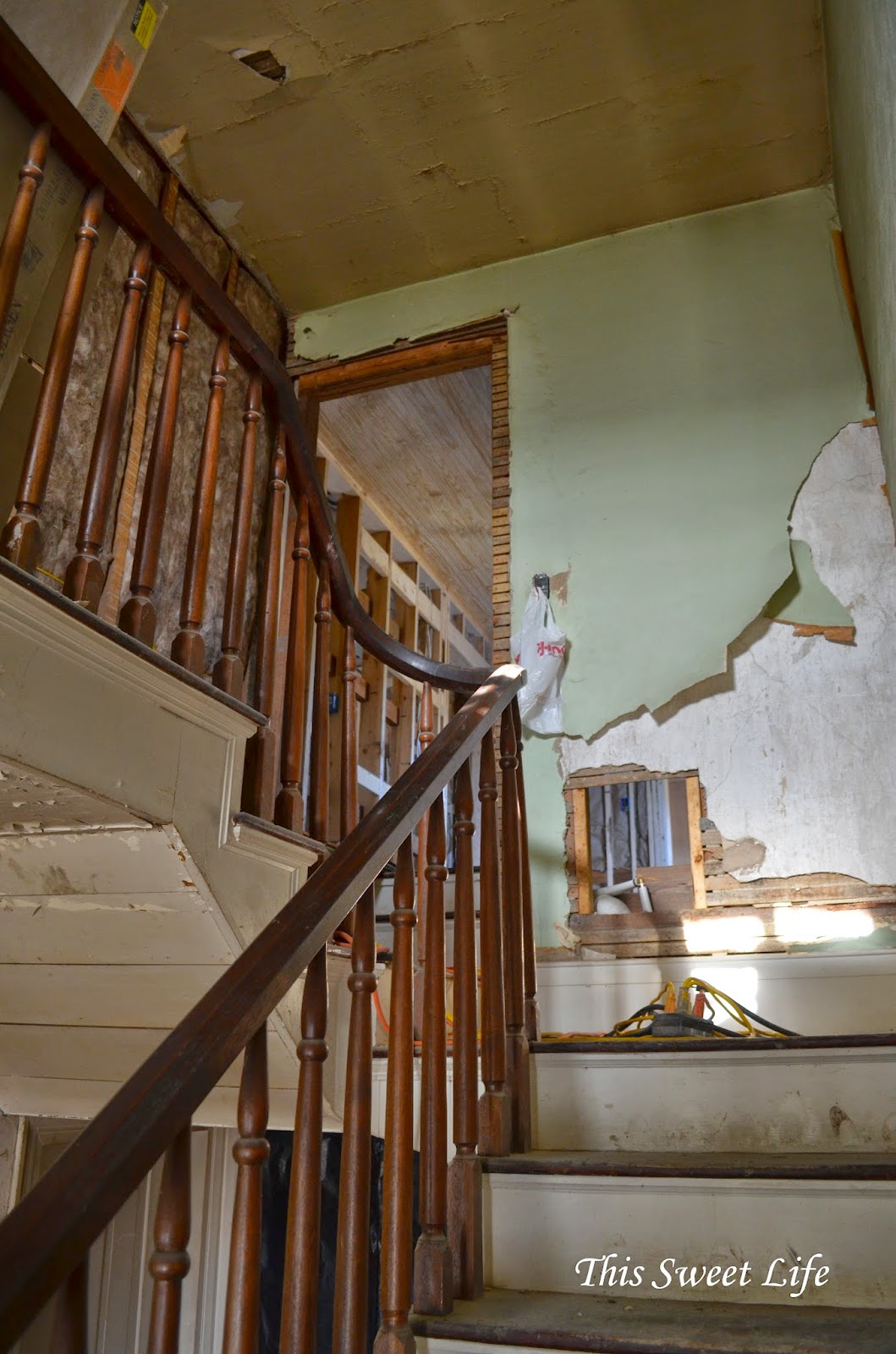 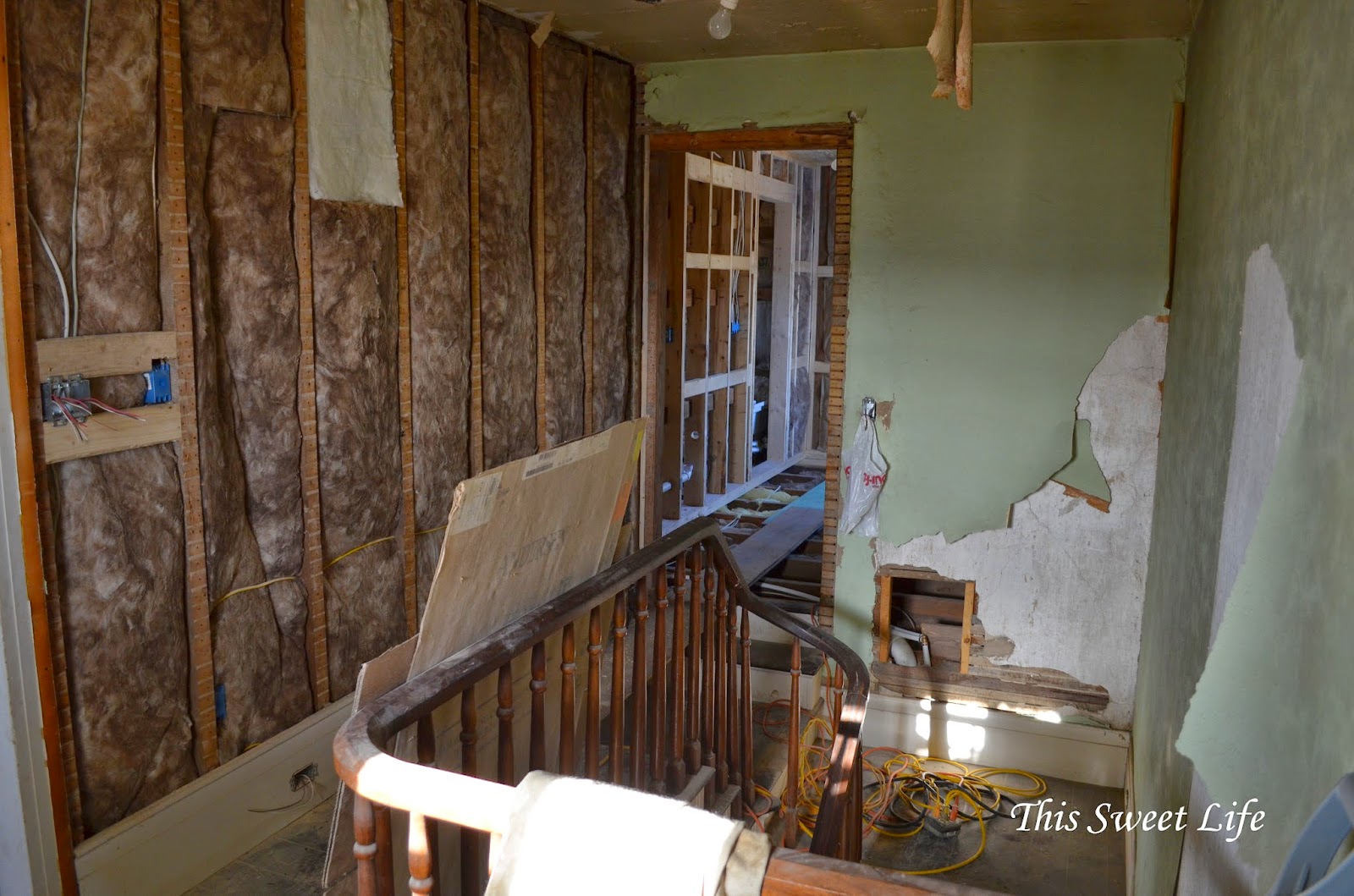 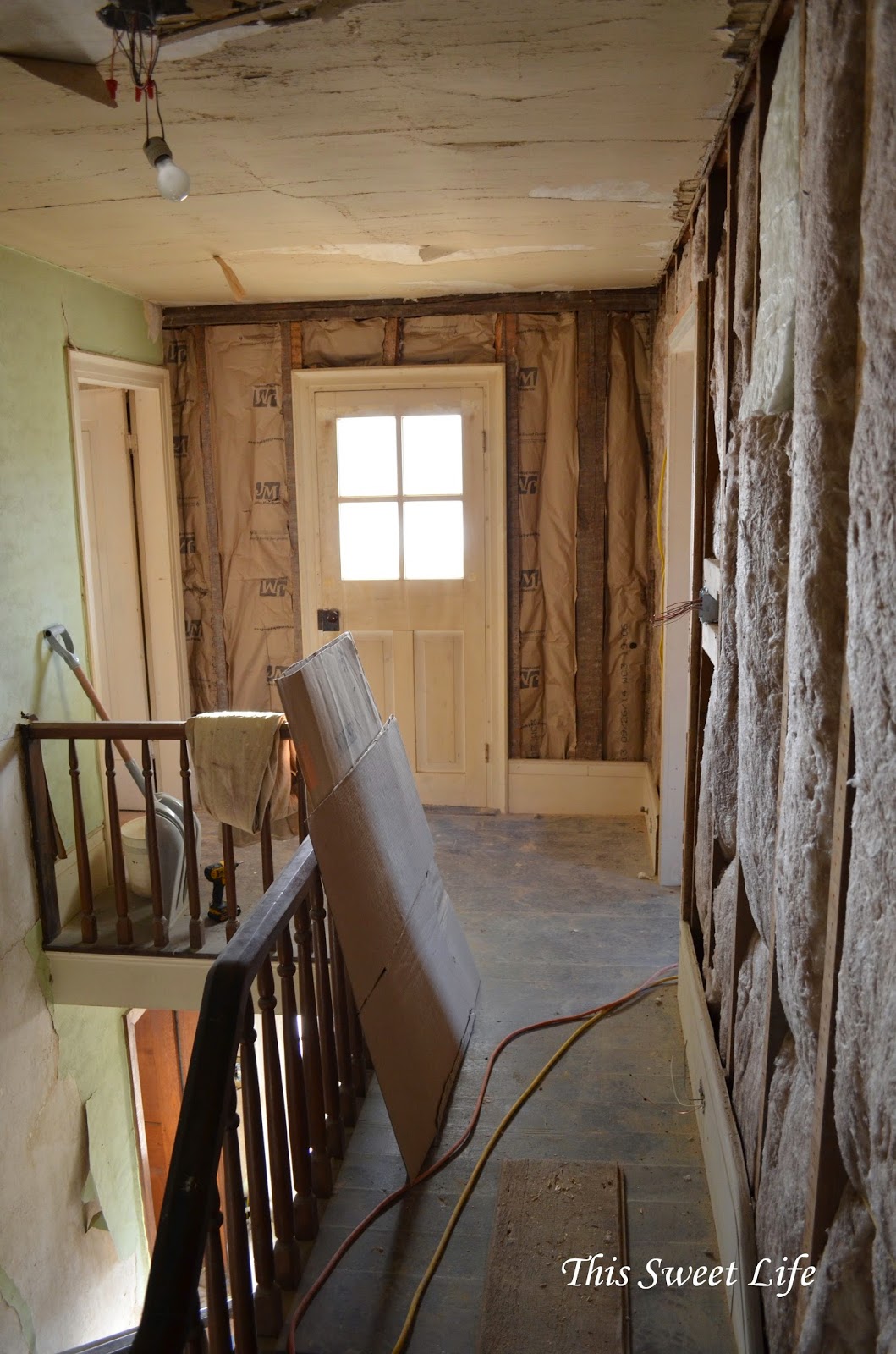 And today, it looks like this! It's hard to believe it will ever look like those first photos again! 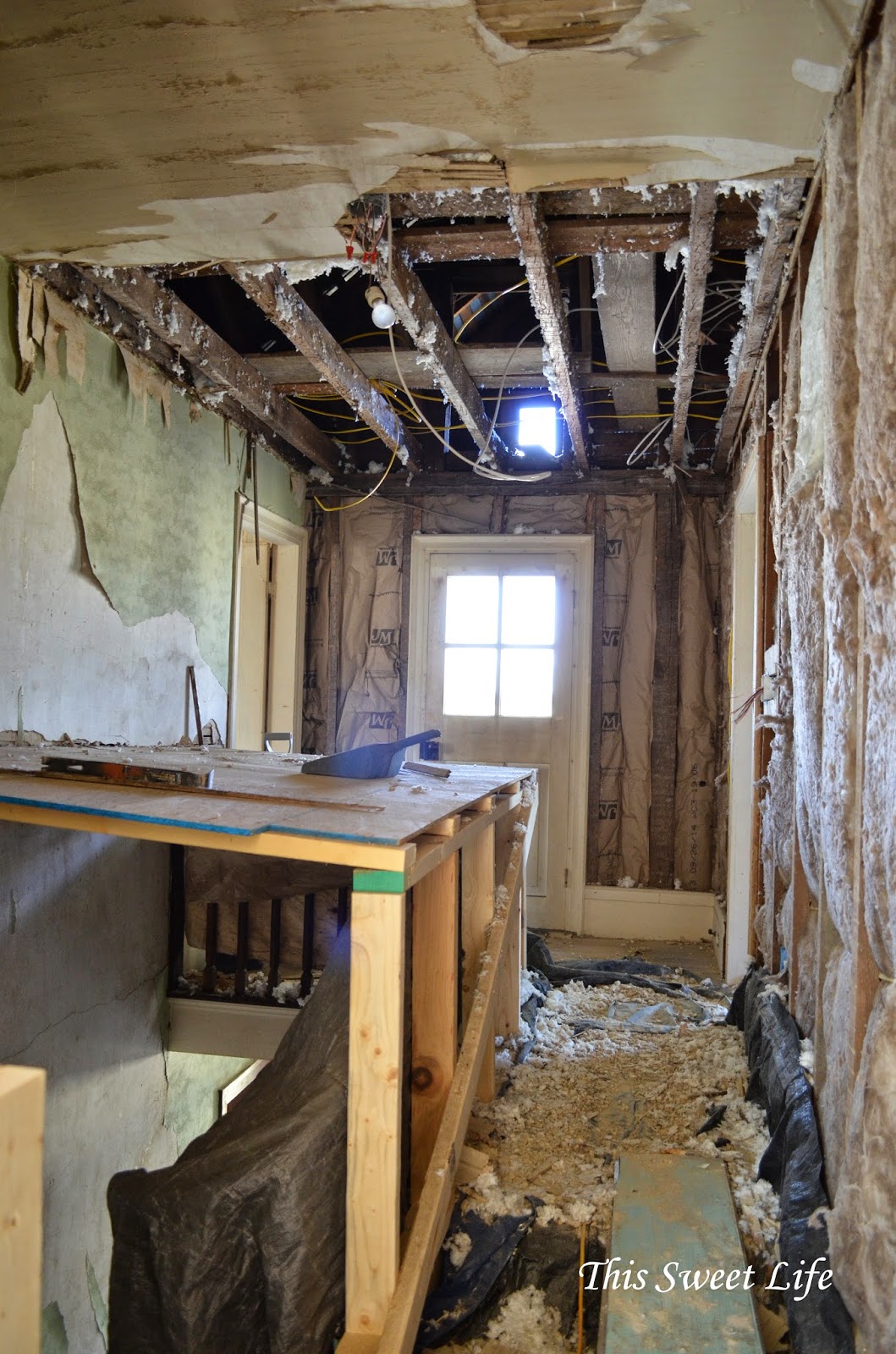 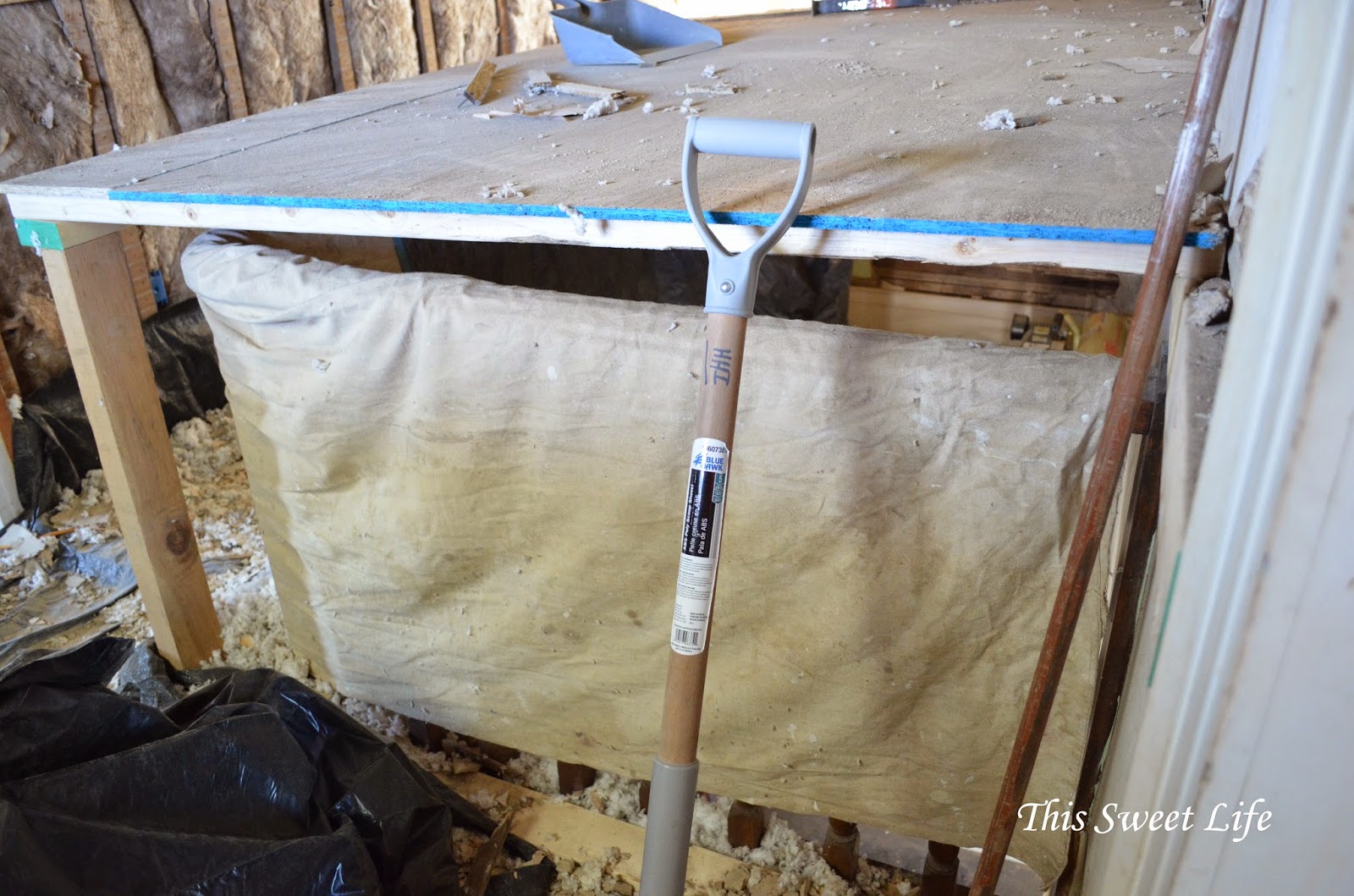 This little "hut" is to protect the banister and stairs from being damaged by falling plaster. See that shovel handle? What you can't see is that the bottom is a very large scoop, which is put to good use in the big job of getting all that debris and dirt out of the house.

Even though everything is a huge mess, every day brings more progress toward our goal. Won't it be sweet when the entire house is clean and comfortable and pretty? Until then, we soldier on!
Posted by Nancy Vance at 10:48 PM 5 comments: