What's A Good Neighbor Worth?

When we bought our land here on Davis Run back in 1990, there were a lot of reasons why it was the perfect place for us: great location, great price, and great neighbors. Of those three, the neighbors across the road turned out to be the greatest blessing. It's a good thing, too, because they were our only neighbors in sight. The other folks who live on our road are great neighbors as well, but Bob and Jerry (yes, Jerry is a woman) opened their lives to us, teaching us by example just what it means to be a good neighbor. Sadly, the day came when they needed to live closer to kin and doctors, stores, and such. But we got to be their neighbors for 15 wonderful years before they left, and we cherish the memories we made and the lessons we learned while they lived across the road.

Bob and Jerry moved away a few years ago because time wouldn't stop and old age crept in. Their house was sold and we were nervous about getting new neighbors. After all, anybody could end up there and no one could replace Bob and Jerry. Would new folks be friendly? Would we have anything in common? What if they were loud and bothersome? Hard to get along with? We had no idea. Over five years later and after a nice couple who found Davis Run too far away from civilization and a family that was "distant," to put it nicely, we finally have new neighbors who are going to stay. And wonder of wonders, they're great neighbors!

Rhonda and Carter are our age and like us, have only four-legged children. They're friendly, fun, and not at all loud or bothersome. In fact, they already feel like old friends. We're relieved, thankful, and excited about our new neighbors. They even like to make syrup! This year is their "apprenticeship" year as they learn the ropes of tapping, gathering, boiling, and bottling. It's wonderful to have the good company and the good help, all in one package right across the road. It's just like before, with Bob and Jerry, only now we're the ones showing how and Rhonda and Carter are the ones walking across the road.

Although neither of us have ever lived near really bad neighbors, Robin and I learned from Bob and Jerry that really good neighbors are priceless. If we can be half the neighbors to Rhonda and Carter that Bob and Jerry were to us, we just might leave our corner of Davis Run as sweet as we found it.

We're sugarin' off on Davis Run! Yep, it's that time of year again, when the trees run, the fires burn, and the steam rolls. Sound crazy? Well, sometimes it can be, but it's always a lot of work and a lot of fun.

We make pure maple syrup. Actually, my husband makes it. I just put it in jars or jugs once it's all thick and syrupy and sweet. Sugarin' off, as the process is sometimes called, is a busy time. It usually lasts about a month, and is totally controlled by the weather. It's the rhythm of freezing and thawing temperatures that makes the sugar water flow. Such conditions occur in our corner of the world between late January and early March. Those same freezing and thawing temperatures also mean mud. Don't be fooled by picturesque scenes of draft horses pulling barrel-laden sleds through white and fluffy snow to gather the water. More often than not, it's mud we're slogging through with the tractor or truck and a sturdy pair of muck boots.

For folks who don't know how it's done, the making of maple syrup is an odd process. Drilling small holes in perfectly healthy trees seems cruel to some, and the thought of eating something that flows out of those holes is a little foreign, even exotic. For those of us who have been around it for years, it's as natural as can be. It's a yearly ritual and a rite of spring. It's also a source of delicious syrup, a little (or a lot) of extra income, and sometimes sore muscles and aching backs. But it's also one of best times of the year because of the people it brings to our sugar house.

There's something about sugarin' that brings folks together. Family, neighbors, and friends all find their way here during syrup season, which makes all the hard work so much easier, even fun. Gathering the sugar water (that's what we in Highland County call it; the books call it sap) is happy work when you have someone along to help. All the lifting and carrying and pouring can get tiresome by yourself, but with a friend or neighbor it lightens considerably. Tending the sugar fires can get lonesome, even sleepy, with the hum of the boil, the steam, and the long hours, but with someone to talk to and reminisce with, the time flies by. And at the end of it all, there are jars and jugs of golden, yummy sweetness to share and enjoy.

So, if you find yourself in our neck of the woods during the next three or four weeks, come on by! If the weather cooperates, we'll be gathering and boiling and you're welcome to join us. Sometimes we're even in the sugar house without any sugar water to boil. It's just what we do this time of year! 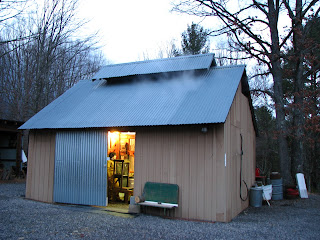