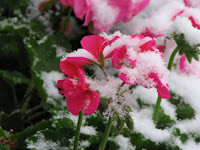 Today is the 29th day of October. We got up to about four inches of snow! And it's October 29th! Daylight Savings Time hasn't begun yet and Halloween is still two days away, and we have snow! Despite living in the mountains, inches of snow in October is unusual. Maybe a few flakes blowing around or even a dusting on the grass, but not inches. We weren't prepared. My geraniums and dahlias are still blooming in the flower bed along the front porch, along with begonias in pots. The bird feeders were clean, but they were still in the basement, and I had to dig for a hat and gloves. 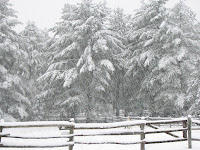 But, oh! What a winter wonderland! Every surface, no matter how minuscule, was covered with white fluffy snow. Fall leaves, still gold, green, and yellow, were laced with whiteness and drooping mightily. The pines took on their heavy snowy mantles and the fence rails were piled high, looking for all the world like icing on a cake. And then there was that glorious snowing sound, the hiss of snowflakes falling against the muffled blanket of silence that dances in my ears like nothing else I know.
Just a couple of days ago I came home from school in shirt sleeves, enjoying the warm October afternoon. Today I wore boots and a goose down coat to the farmhouse when I went to paint. I found it ironic that I painted the kitchen ceiling in 90-degree weather, wearing as little as decently possible and still sweating buckets, and today, I had the heat on and wore my coat and hat most of the morning as I painted a few feet away in the adjoining pantry.

It's evening now, and most of the snow is gone. I knew it wouldn't last long in October. The ground still holds too much of summer's warmth for snow. But I loved it while it lasted. It was a gloriously sweet surprise from Mother Nature.
Posted by Nancy Vance at 9:36 PM No comments:

Email ThisBlogThis!Share to TwitterShare to FacebookShare to Pinterest
Labels: Holidays and Seasons, Nature

A while back, I wrote about visiting my grandparents as a child in my post, "Sundays With Dad." I vividly remember getting carsick on the mountains we crossed during the drive every third Sunday. And I remember having to sit in the middle in the back seat of the car all the time. That's what I remember. I think. My middle sister, however, remembers it differently. She recalls volunteering to sit in the middle on the way to Grandmother's, to get it over with and have the window seat on the way home. When I asked my oldest sister about it, she couldn't remember exactly but said the volunteering thing sounded like something Mom would have suggested. Which brings me to the point of this post: which one of us is right? What's the truth of the past here? Am I remembering right?? Does anybody remember it right??

Memory can be a tricky thing. Everyone knows that several witnesses can see the same incident at the same time and yet recount different and sometimes conflicting accounts of what took place. Some of that can be chalked up to different perspectives, I suppose, but what, exactly, is the truth? Can we ever find out? Just how reliable is memory, anyway?

Several years ago I wrote an account of my parents and aunts and their experiences during World War II. I encountered this same problem with memory: siblings remembering the same incidents differently. I also found that their memories didn't always agree with historical records of events either. Of course, more than 60 years had passed, which could cloud one's memories a bit. But I'm thinking that a lot of the time, we remember things the way we want to remember them instead of how they really were. For example, over lunch at school, we teachers often recall how different school was for us as students years ago, in contrast to what we see now. Our memories are mostly of the "things weren't this bad when I was in school" kind. If our teachers from 30 or 40 years ago were part of our discussions, though, how would they remember those days? I'm thinking their memories wouldn't agree with ours.

So, what happens when our memories don't agree? Sometimes it causes laughter and good times, other times heated discussions and hard feelings. Sharing memories, however, brings us together in a way nothing else can. Memories, be they bitter or sweet, are important just because we have them. They help make us human. And most of the time, hopefully, they make life a little sweeter.
Posted by Nancy Vance at 9:15 PM No comments:

We said goodbye to an old friend this week. It was a sad parting, but the time had come. We debated for several years over when it would be best to let it go, although every wind storm made the decision a little easier. Our old friend was the last of seven huge maple trees in our yard. Loyal and quiet, it sheltered us for the twenty years we've lived here but it has stood sentinel for decades, maybe even a century or more. And now it's gone. 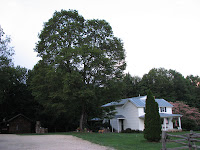 Well, not really gone. Yet. There's still quite a bit of it in the yard, only now it's horizontal instead of vertical. It's amazing how tall a tree is when it's on the ground! And that was just the reason we had to cut it. This old maple was huge, and way too close to the house for comfort. If it had fallen just right, our front porch and two front rooms would have been underneath its massive trunk. Many a night I pleaded with God to "please, don't let it hit the house if it falls" while the wind howled outside. We held out for as long as we felt it was reasonably safe, but the time came at last when we had to bite the bullet and cut it down.

I wasn't here for the cutting since it was a school day. I suppose that was a good thing, since chain saws grate on my nerves and watching such feats make me think of all the ways the process could result in disaster. I snapped some photos before I left for school and said my goodbyes with a wistful sigh.


When I came home, the sky was empty and the yard was full. Robin surveyed the work that awaited him, wondering when he'd ever get it all cleaned up. I took more photos. When we looked over the stump, trunk, and largest branches we could see that we made the right decision. The core of the tree was wet and soft, a sure sign that decay wasn't far off. We could also see where the tree had been tapped over the years for making maple syrup, which made us wonder just how old it really was. But there was no use in waxing nostalgic at that point, so we both got to work. Robin started clearing brush and I tackled the sidewalk with a broom and a shovel. We barely made a dent before dark.
﻿

Today, a couple of days later, we're getting used to the yard without our big tree. A friend helped Robin get all but the biggest chunks cleaned up and hauled away. What a blessing that was! (Thanks, Jeff!) As with every change, there are pros and cons: our kitchen in lighter, but the dirt on the windowsill shows more, and chances are the evening sun will be in my eyes as I work at the sink. There won't be such a mess of leaves and seed pods around our door, but there won't be any shade from the hot afternoon sun either. And I'll be able to see who's pulling into our driveway from the window, but the birds have lost a huge source of shelter and food. Still, life is all about change, whether we like it or not. Once in a while the constant force of change we don't notice most of the time makes itself known in big ways. When it does, I want to savor the sweetness of good memories and blessings yet to come. 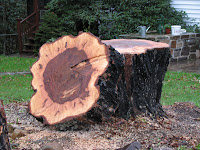 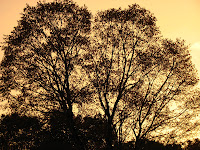