The lights are on our little Christmas tree are twinkling, but the real show is outside. The heavens are singing the glory of God with stars upon stars upon stars. If I slip outside when Christmas comes, I won't hear any animals talking, but I will hear the sweet sound of angels singing! It's almost here! The clock is striking midnight! Gotta go! 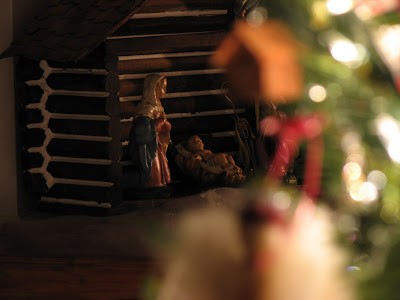 Email ThisBlogThis!Share to TwitterShare to FacebookShare to Pinterest
Labels: Holidays and Seasons

Every month I write a letter to my three elderly aunts. I started this ritual one Christmas when I couldn't think of anything else to give them. I had purchased a home computer and digital camera that year, which made it easy to compose one letter, illustrate it with some photos, and print three copies. They loved it, and five years later I'm still at it. I tell them about what's going on in my life and what's up with the rest of the family. I've done pretty well: only a few letters have been late, and I think I missed only one month when I was sick. I'm always on the lookout for auntie letter material. I know they will be disappointed if I don't come through. The next letter I write will be bittersweet, though. You see, one of those three aunties died this week. Aunt Frances, at 89, was the youngest of her four siblings and the first one to pass on. She was a tiny thing in body, but big in spirit, apparently a lot bigger than I knew.

Aunt Frances, who was always full of spunk, got married the day after she graduated from high school in 1940 and moved over a hundred miles away, give or take a few, to start a life with her new husband. Her family saw little of her during the next 20 years or so. World War II interrupted everyone's life, and Aunt Frances was busy raising six children. My memories of her begin when I was in elementary school and her sons and daughters were young adults. After her husband died in 1975, she was able to reconnect with her brother (my dad) and two sisters and by the time I was in college she came to visit her homeplace a couple of times a year. My, how the stories would fly when the four of them got together: I was spellbound by tales of a depression-era childhood in the country: stories of farm life and school life, of adventures with friends and lessons learned the hard way, all of which took place way back when in the days before television.

Even though I knew Aunt Frances, saw her, talked with her, hugged her, wrote to her, it was the kind of knowing that families have when they live long-distance. I didn't know any of her friends, never met her on the street running errands, never stopped by her house on Sunday afternoon. Yesterday, during her funeral service, I got a glimpse of "that little woman" that her friends and neighbors knew. Folks spoke of her love of quilting, gardening, and red birds. I heard how she marched her children down the road to Bible School in the summer, sang in the church choir, and spoke with stark honesty, whether you wanted to hear it or not. And I was glad I was family, glad she was my aunt, glad I was there, shedding tears along with those who knew much more of her than I. Despite the sadness, it was a sweet hour of remembering and celebrating the feisty little lady that was my Aunt Frances.
Posted by Nancy Vance at 9:42 PM 1 comment: