The Monroe County (WV) Historic Homes Tour on May 6 was a delight. After our first two stops at St. John's Chapel and Old Sweet Springs, my sister and I headed back toward Union. About 12 miles before we got there was our third stop on the tour: The Beirne Dransfield General Store. 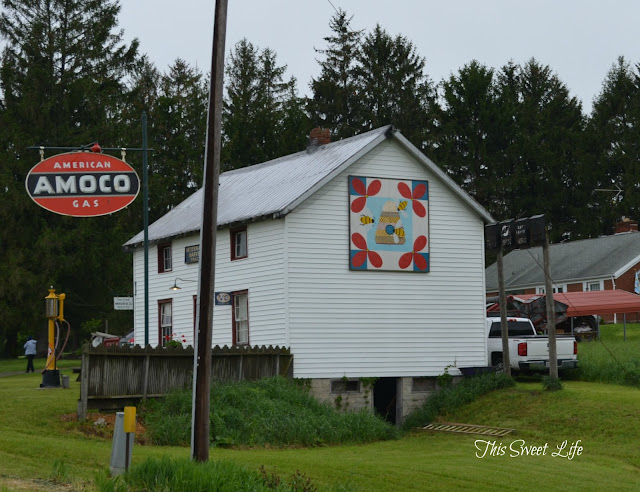 This Depression-era store sits unassumingly near the road miles from any other business. Decades ago it was a place to buy groceries, farm products, machinery, fertilizers, feed, and gasoline. The store was established by Beirne Dransfield and the building was built in 1933. For years prior to that, however, he had been supplementing his farm income through dealerships with V. C. Fertilizer Company, International Harvester (farm equipment), Wayne Feeds, and Amoco gasoline. Once all these enterprises were operated out of the building, it made sense to stock other supplies needed by the locals.

Beirne Dransfield had seven sons, three daughters, and several grandsons. I went to school with some of those grandsons and one granddaughter (also named Nancy). One grandson is the same age as me and we've been friends since seventh grade. I remember asking him what that white building was in front of his house and he told me it was "an old store." Now, after some 50 years or more, it's a store once again. Not in the usual sense, though. It's open only for special occasions to share a slice of life long-ago for free. 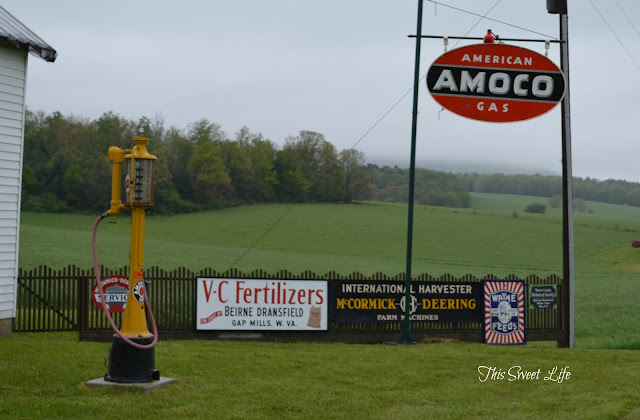 Another of Beirne's grandsons has spearheaded the effort to restore this old family business. Since he was a child, he's been collecting antique and vintage items that were once sold new in the store. He's also obtained vintage signs for the various dealerships and even an old gas pump. 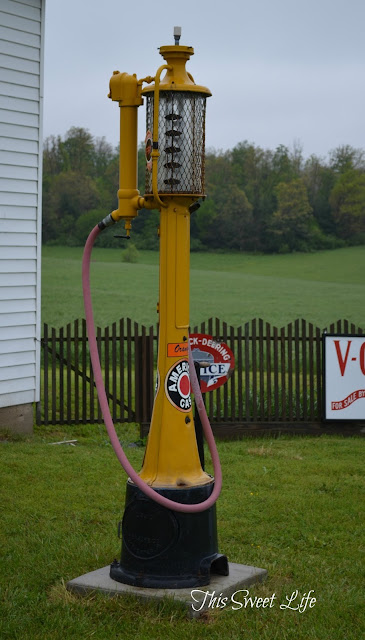 Because the day was so chilly, the door was closed, but I'm sure it stood open in bygone days whenever the weather allowed. 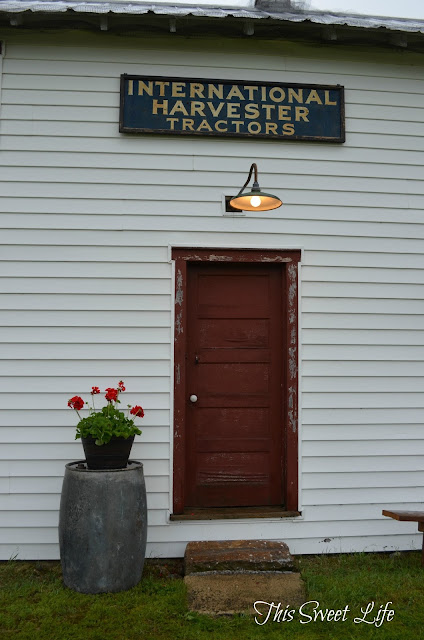 Inside was an old wood cook stove that now serves as a display counter. On this day it held a guest book. The walls were filled with old photos and advertisements, helping folks to imagine what life was like for their grandparents and great-grandparents. 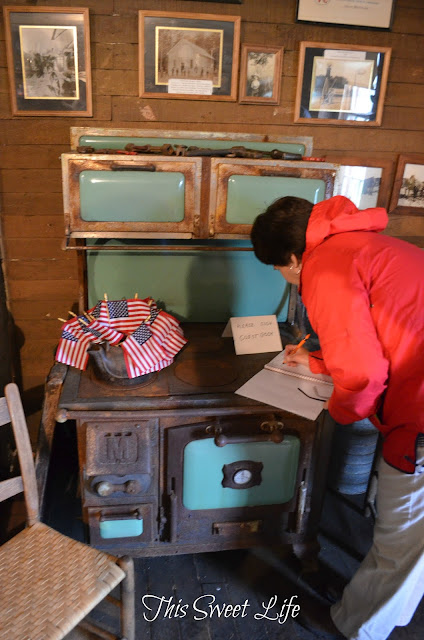 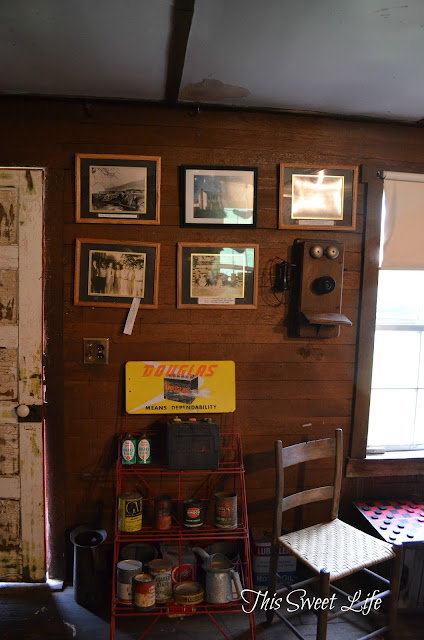 Like many merchants then and now, Beirne Dransfield gave away calendars to promote his business. There was a beautiful one from 1939, framed and hanging behind the counter. 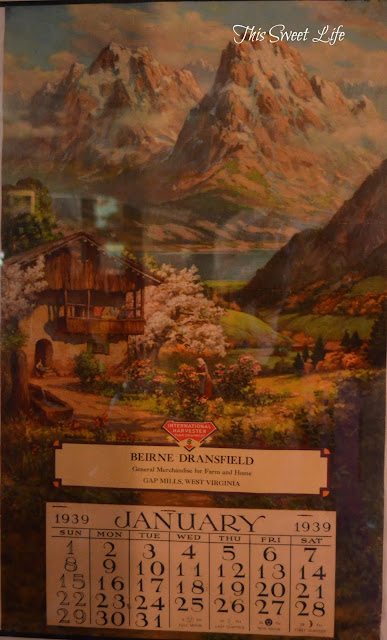 There were shelves lined with a variety of vintage items as well. Some would have been sold here. Others were typical of the era. 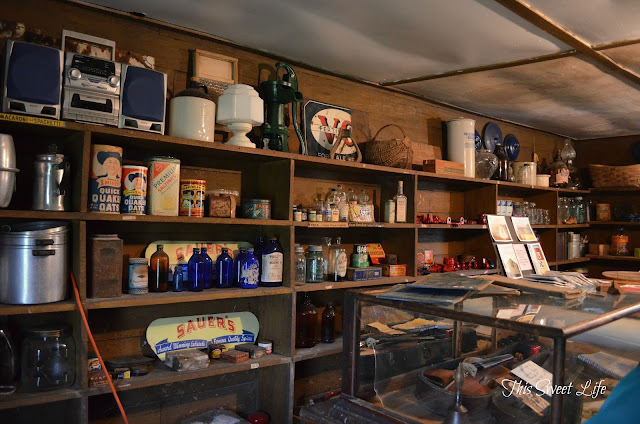 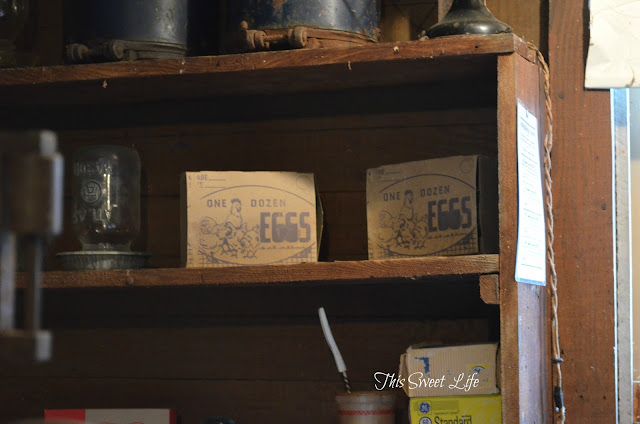 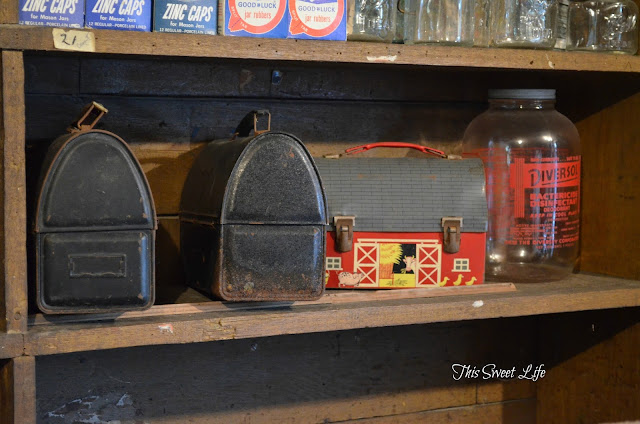 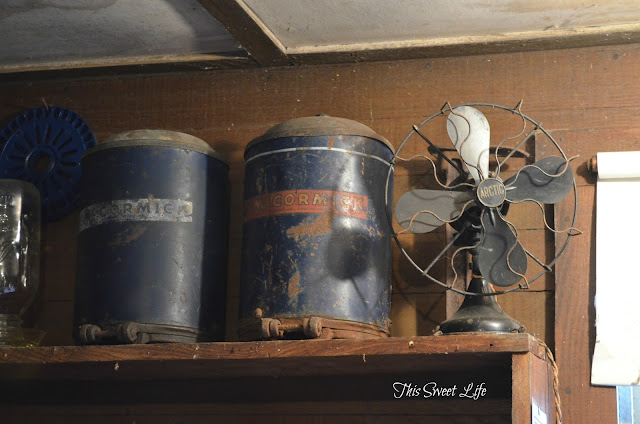 Back in the day, I'm pretty sure the store sold snacks of some sort. On this day, however, one of Beirne's grandsons was behind the counter, serving up barbecues as a fundraiser for the local 4-H program. 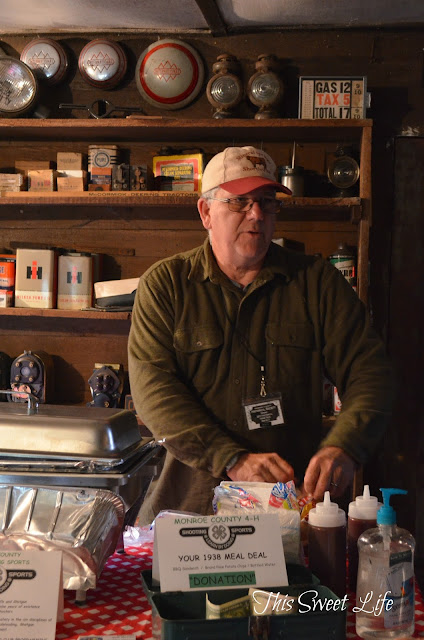 To go with the hot sandwiches, there was pop (we call it "pop" around here, rather than soda), in a vintage cooler complete with ice and a bottle opener on the side. 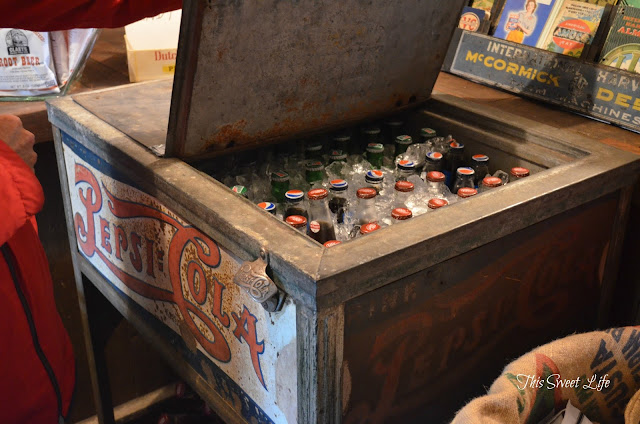 If you would rather have water, that was on ice as well, in an old cream separator. 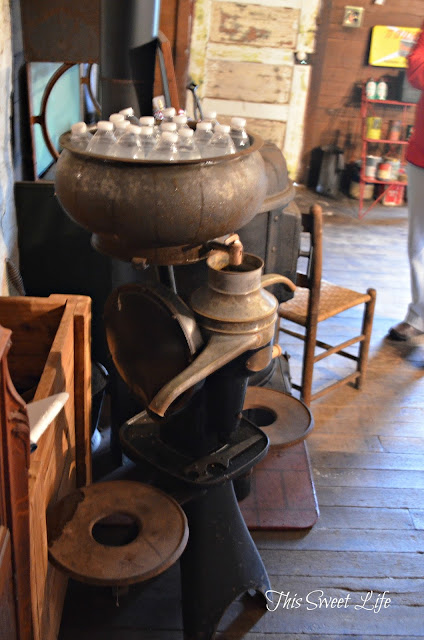 There was a display of old farm equipment manuals, 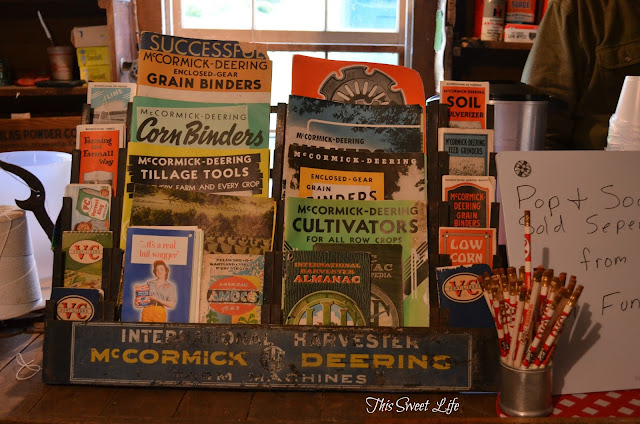 some of which might have told me how to start one of the old tractors parked in the yard. 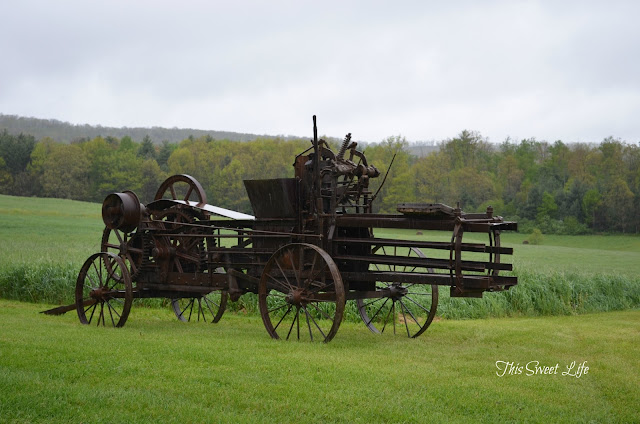 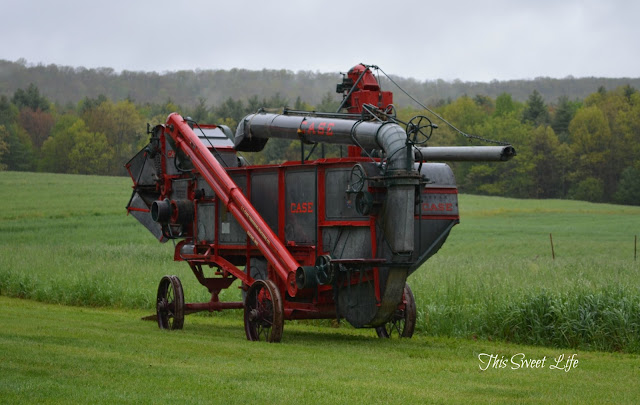 And, if you had time to sit a spell, there was a checkerboard ready for a game. If you were able and so inclined, there was also an old family fiddle that could provide a lively tune. 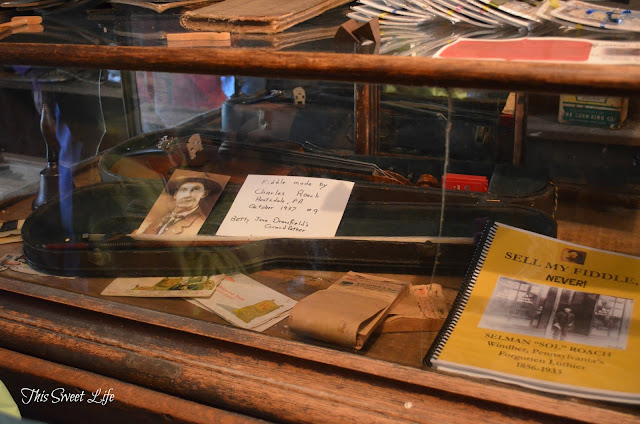 In the storage room, there were horse harnesses, a potato sorter (I think), and other tools of the day. 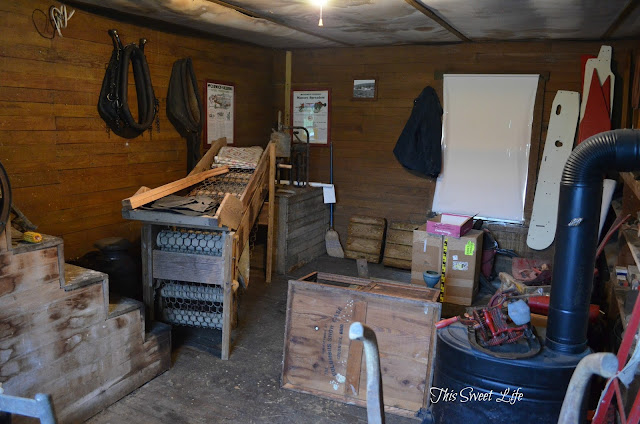 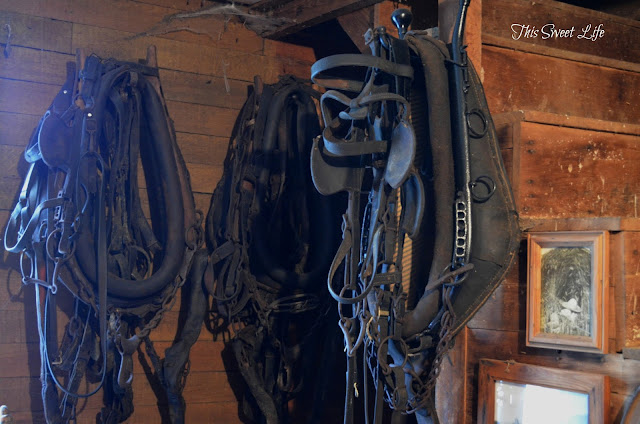 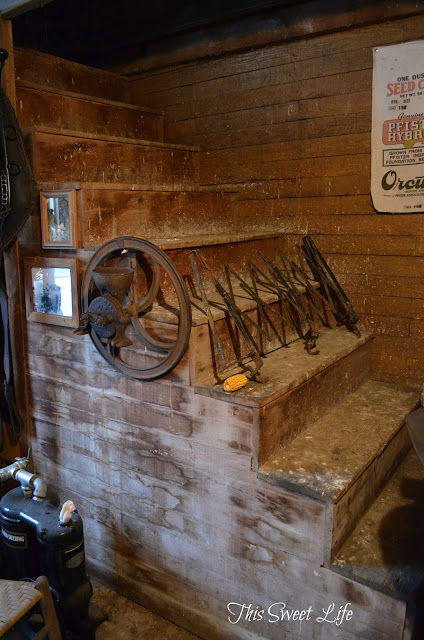 As I wandered around the tiny store, it was easy to envision it in its heyday, with farmers and families stopping in for supplies, gas, or maybe even a bottle of pop - an extra special treat during the Depression. What a delight to take a little step back in time! It does my soul good to venture into days gone by now and then. 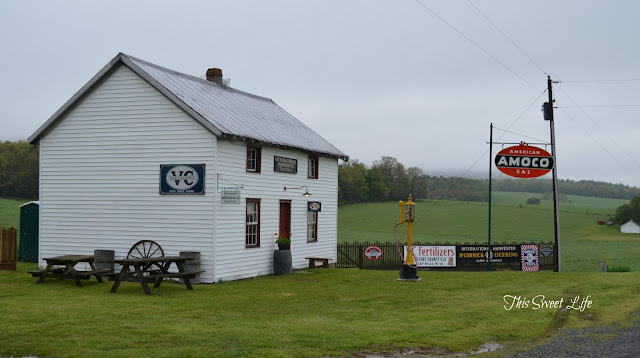 Thanks so much for stopping by! I appreciate your time and hope you found a blessing at This Sweet Life!